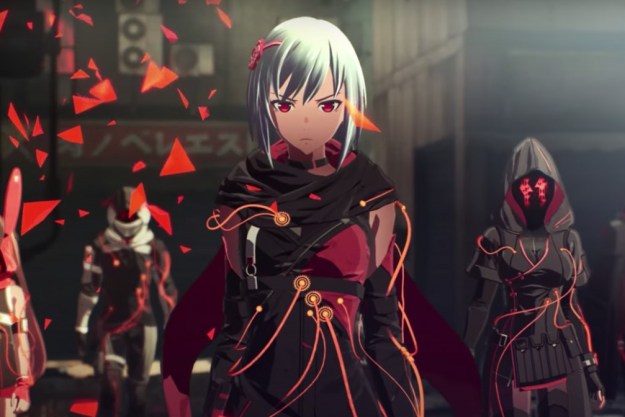 “Scarlet Nexus is an excellent action roleplaying game for all fans of the genre.”

There’s no shortage of Japanese action roleplaying games on the market, but Bandai Namco’s Scarlet Nexus is a new IP that stood out from the crowd and immediately caught my eye. After playing the demo that was released earlier this year, I knew I was in for a good time and I am overjoyed to find that my hunch was right.

Scarlet Nexus is a game that takes any expectations and pushes them aside by amazing players with new ideas in every direction. This “brainpunk” title takes place in a futuristic world where humans have found a way to use a hidden gene to unlock superpowers in certain people. That premise perfectly lends itself to both the gameplay and story, both of which pleasantly surprised me throughout the entirety of my experience.

While the game starts off a bit slow and took a bit of time to get into, Scarlet Nexus is a worthwhile experience and a great addition to any JRPG collection thanks to its bombshell of a plot and gameplay.

At the beginning of Scarlet Nexus, I had the impression that the story was going to be by the books with boilerplate characters. Thankfully, I was entirely wrong. While the characters can come off as trope checkmarks to anyone who has seen an anime in the last decade, they have so many memorable moments together that they quickly grew on me and I was left wanting to spend more time with them.

The world of Scarlet Nexus is a futuristic one where certain members of humanity have awakened to various superpowers thanks to a psionic hormone discovered in the brain. Along with that, there are Others, wonderfully designed mutants that come from the sky and feast on human brains. The Other Suppression Force (OSF) was formed to combat the zombie-like threat.

Things begin with players selecting either Kasane Randall or Yuito Sumeragi, two new recruits to the OSF who have very unique powers and skills. However, there is a lot more to this new duo than meets the eye, and that’s where Scarlet Nexus‘ story really shines.

Those surprises are truly what make Scarlet Nexus‘ plot so special — you just have to witness them for yourself.

Things begin as you’d expect with a story like this. You meet your teammates, undergo training, go on a mission or two, get to know one another, the usual. Then suddenly, one surprise begins to hit you after another, leading to a story with no brakes and tons of excitement. Before I knew it, I was finding characters to root for, jeering at others, and constantly wondering where things were going to go next. As is usually the case with a story like this, players will be left wondering just who and what they can trust and what they can’t.

I wish I could go even further in detail, but that would mean spoiling everything. Those surprises are truly what make Scarlet Nexus‘ plot so special — you just have to witness them for yourself.

The story isn’t the only area where this game excels, as the gameplay also kept me glued to my screen. As early as the opening tutorial, Scarlet Nexus wants players to know that it isn’t like any other action RPGs. That’s thanks to its unique battle mechanic, which allows for some fun visuals, combos, and strategies.

The game has everything you’d expect from a character-driven action game/hack-and-slash title — perfect dodging, weapon attacks, and launchers. What sets it apart is its usage of the psychokinesis attacks and assist specials, which are what had me so interested in the title in the first place.

By holding R2, players consume a psychokinesis gauge. This allows players to control surrounding objects and toss them at enemies, scoring big damage. Attacks can be chained together with standard weapons and specials, with the chains growing longer and more elaborate as you level up, making way for some fun combos. As with any game that puts a big focus on combos and free-flowing combat, you can already guess what kind of things you’ll be seeing with this system, but it gets even wilder courtesy of the SAS mechanic.

As early as the opening tutorial, Scarlet Nexus wants players to know that it isn’t like any other action RPGs. That’s thanks to its unique battle mechanics that allow for some fun visuals, combos, and strategies.

SAS is a brain-to-brain connection that allows players to temporarily use party members’ different abilities, basically granting different assists. That includes elemental attack augments, invisibility, time slowing, a doppelganger that can double attacks, or having a partner jump in with an assist attack.

This mechanic adds a deep strategic element to battles, as different SAS attacks have unique stats that are more effective on certain enemies. For example, one enemy can shoot water, which will spill all over it after a certain amount of hits. Using an SAS assist with electric properties allows players to score higher damage on their waterlogged foe. In the beginning, players start with one of these assists and work their way up to four at once, opening the door for some high combo potential. It just takes a bit of grinding to get there.

Yes there’s an RPG in there, too

While the action and story take center stage, the game has no shortage of the usual RPG elements.

In order to get all of a character’s abilities unlocked, players will need to fight through the story and revisit previous areas to level up and earn Brain Points. As with many other RPGs sporting a mechanic like this, players select points on a map to decide what path they’ll follow to level up next.

On the other side of the playing field, party members can be leveled up to unlock more SAS abilities. That’s accomplished by increasing a bond level with them, similar to the Persona series. Bonds with a character are increased by talking to characters or giving them gifts, in turn unlocking more abilities. Once a certain requirement of interaction is hit, players also unlock a bond episode, a special cutscene that features the player character getting closer to whoever they’ve bonded with. This also increases an overall team bond, granting bonuses like special items and free revives. While it may sound like a chore, it opens a lot of fun dialogue moments between characters while not getting in the way of the core combat loop.

There’s also the classic material system that RPG fans will be familiar with. Throughout levels, players find little digital cubes that they’ll need to pick up. These can be taken to a shop and traded for different cosmetic pieces for the party, health items, and various weapon and stat upgrades.

It feels lively thanks to the abundance of NPCs and great care put into the look, feel, and sounds of the different maps.

The one downside of the RPG gameplay is the game’s exploration. While I really liked the bright and detailed city and ruinous environments of the game, traversing the city feels tacked on. Items are placed in empty and dull hallways and often feel unnecessary. It gets even more annoying when backtracking to these areas to find more.

Despite this, I enjoyed my time exploring the world of Scarlet Nexus. It feels lively thanks to the abundance of NPCs and great care put into the look, feel, and sounds of the different maps. I just wish item hunting didn’t feel like a drag at times.

Scarlet Nexus is a must-play for any fan of Japanese action RPGs and standard JRPGs. If the story doesn’t grab your attention, the combat will. It has enough meat to its action to distract from its very minor blemishes. Its characters are a delight to interact with and seeing them grow together really had me fully invested in all of their arcs. I left the experience craving another title like it that takes its excellent action even further.

It should take over 60 hours in total. The unlockable abilities are worth hunting down, too, adding lots of extra replay time for those who want to dive deeper.

There are tons of other action RPGs on the market. The Tales series and the renowned Final Fantasy 7 Remake are some that I would recommend, but Scarlet Nexus offers such a rich and unique experience that I wouldn’t turn it away.

If you’re hungry for a some good action or a great story, I highly recommend jumping right into this one.

Topics
Goldeneye 007 comes to Game Pass and Nintendo Switch later this week
Xbox and Bethesda’s Developer_Direct: how to watch and what to expect
The best RPGs for the Nintendo Switch
GTA 5 cheat codes and secrets for PS4, PS5, Xbox, and PC
The best Pokémon Scarlet and Violet mods
The best ultrawide monitors for 2023
The best Xbox One controllers for 2023
The best SSDs for 2023
WWE 2K23 brings the pain with John Cena, Cody Rhodes, and Bad Bunny
The best gaming PCs for 2023: Dell, Origin, Lenovo, and more
You can turn off Frey and Cuff’s banter in Forspoken
The best Xbox Series X and Series S deals for January 2023
This Alienware gaming PC with an RTX 3090 is $520 off right now