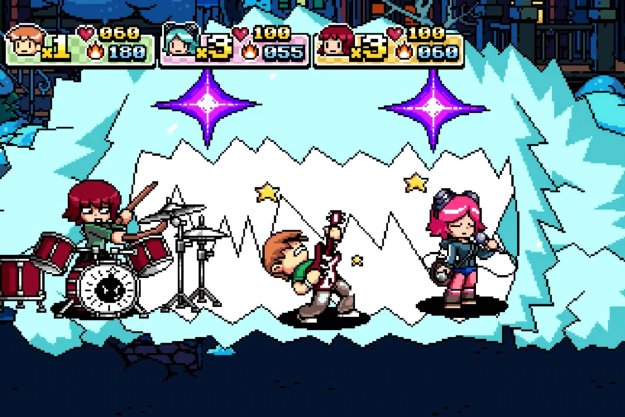 “Scott Pilgrim vs. the World is a fun trip down memory lane for fans of the original, though its shortcomings stand out over a decade later.”

Scott Pilgrim vs. the World: The Game — Complete Edition is two layers of nostalgia deep. On one hand, the game itself is a throwback to old-school beat-’em-ups, filled with retro gaming Easter eggs. Adding to that, the Scott Pilgrim franchise itself now carries its own air of nostalgia, making it as much of a blast from the past novelty as the games it references.

Fans of the game have dreamed of this moment for years. Originally released in 2010, Ubisoft abruptly delisted the game from online marketplaces in 2014 due to licensing issues. No one has been able to buy it in over a decade, triggering conversations about proper game preservation all while giving it an air of mystique that’s kept the game dear in players’ hearts. By bringing the game back in 2021, players no longer have to rely on their fond memories to keep it alive, for better or worse.

While it’s been outclassed by similarly styled games the past decade, Scott Pilgrim vs. the World: The Game — Complete Edition is a fun, but light, trip down memory lane for fans of the franchise. Though, like its source material, the signs of aging are hard to avoid in 2021.

Scott Pilgrim vs. the World: The Game is easy to explain: it’s a beat-’em-up style side-scroller that deliberately harks back to retro titles such as Streets of Rage. The source material lends itself particularly well to that genre. In the comic series, the titular Scott Pilgrim must win the affection of his girlfriend, Ramona Flowers, by fighting off her seven “evil exes.” The game follows the same basic plot, with seven levels that each culminates in a throwdown against an ex (and one more self-reflective showdown with Scott’s own doppelganger).

The strength of the original game has always been its clever link to the franchise’s story. The structure of the comic is a natural fit for the genre, making the old school brawler format feel more purposeful, and less like simple nostalgia. The fact that the comic itself is full of little nods to the era only makes the pairing feel like a no-brainer.

For fans of the comic or film, it remains a perfect companion piece. The art, tone, and story are all perfectly in line with author Bryan Lee O’Malley’s work. Even returning to it over five years since I’d last engaged with the series, nothing feels out of step with my memory. In some ways, the game even does a better job at avoiding some of the comic and film’s less flattering elements.

Over the past decade, public opinion on Scott Pilgrim has shifted. While many fans fell in love with the nerdy coming of age story in the late 2000s, it’s come under more scrutiny in recent years. Plot points that once flew under readers’ radars, like the 23-year-old hero’s uncomfortable relationship with a high schooler, carry different weight in a modern, socially conscious context (developer Ubisoft has found itself in a similar situation following a wave of abuse allegations at the studio this past summer). Considering that the re-release is bound to take fans back a decade, this kind of re-examination of a formative piece of media is not only inevitable, but healthy.

For fans of the comic or film, it remains a perfect companion piece.

Fortunately, the video game adaptation passes the smell test better than other arms of the franchise. The simplified storytelling leaves out the fine details to its accidental benefit a decade later. In some ways, that makes this package the best way to engage with the property in 2021 for fans who are nervous about how it holds up.

When it comes to fighting, the game doesn’t overcomplicate anything. There’s a light attack, a heavy attack, a block, and a few special abilities. Anyone who’s ever played this style of game likely won’t have trouble figuring it out, which is important since the game is best enjoyed as a casual co-op multiplayer experience that players can quickly drop into.

As a throwback brawler, the game is deliberately stripped down. The attacks are basic and there’s not much variety from character to character, save for altered animations. Any added complexity comes from its light RPG system, which lets players increase their stats by buying items and adds 16 new moves through a level-up system. Once every ability is unlocked, combat feels a little more varied, though the four-hour main story is just about over by the time players reach that point naturally.

For those who have never played or have oversized memories of the original release, some context goes a long way here. The game was originally released alongside the film as a $10 digital title. It was essentially a tie-in title that gave fans a way to continue their love for the property for a few extra hours. It’s also important to note that it was released at a time when throwback brawlers weren’t terribly common, allowing it to build on the success of indies like Castle Crashers. By 2010’s standards, the retro combat was an exciting sell in its own right and it remains charming here.

There’s just a bit of inescapable irony to the fact that Scott Pilgrim now feels as retro and out of date as the games it’s referencing.

Still, just as its source material is subject to new examination today, it’s hard not to place the game in a modern critical context. Retro brawlers are a dime a dozen these days and Scott Pilgrim feels one step behind, even as a throwback. Last year’s standout Streets of Rage 4 showed how a brand-new beat-’em-up can feel fast and fluid like a modern game without sacrificing nostalgia. By comparison, some mechanical parts of Scott Pilgrim haven’t aged well, like a lack of air control or finicky hit boxes.

This isn’t a remake, so players shouldn’t expect gameplay updates here. However, there’s just a bit of inescapable irony to the fact that Scott Pilgrim now feels as retro and out of date as the games it’s referencing.

The release is billed as a complete edition, as it features all DLC from the previous game. That includes two extra characters, a few modes, and online multiplayer support. That last piece is the most important inclusion, as its absence in the original release was a head-scratcher even back in 2010. Considering that local co-op isn’t an option for most gamers right now, online play provides another fun game night option for friends cooped up inside.

Make no mistake: the spectacle is the real product here.

Other than that, the “complete” moniker doesn’t amount to much. The bonus characters play more or less the same as the others, and the added modes are little more than fluff. It’s hard to imagine even the most die-hard fan getting more than half an hour out of bare-bones competitive modes like Dodge Ball. Other than a Boss Rush option and online leaderboards, there’s not much to come back to after the quick story, making it an even shorter retread than I’d originally remembered.

For many fans, the extra content is hardly what matters. The fact that the game exists again at all is a win for those who feared there would never be a way to play it again. It’s a celebratory excuse for die-hards to plop down some money on elaborate physical editions, ensuring that it’ll never be lost to time again. Make no mistake: The spectacle is the real product here.

The Complete Edition’s existence is more of a symbolic victory than anything and that might not mean a whole lot to people who never played the original. Taken at face value, it’s an average beat-’em-up that’s good for a few hours of casual multiplayer with friends. But for those who have long pined over the one that got away, it’s a fairy tale ending come true.

Scott Pilgrim vs. the World: The Game — Complete Edition is a much-needed re-release that faithfully preserves the long lost original. The outdated beat-’em-up combat and light features may not live up to fans’ almost mythological memory, but just being able to find that out is a victory in its own right.

Streets of Rage 4 is the current king of the hill when it comes to co-op retro brawlers.

The story is over in around four hours and the extra modes aren’t likely to lengthen the experience more than another hour or two.

Yes. It’s exactly what it needs to be for fans of the original, who are the target audience here, though newcomers won’t likely get what all the fuss is about