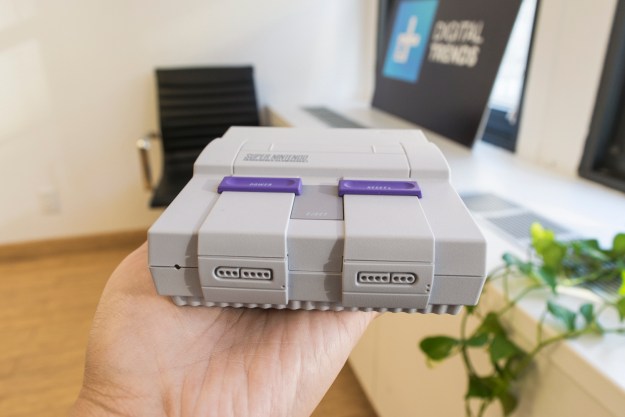 “The SNES Classic Edition is every nostalgia junkie’s dream machine.”

For the second year in a row, Nintendo is releasing a “classic edition” emulation box that compiles the greatest hits from one of its beloved retro consoles, making it easy for fans to once again enjoy classic titles. This year’s model, the SNES Classic Edition, offers an even stronger nostalgia hit than the NES Classic, thanks to its meticulously crafted design and well-curated list of games from the 16-bit era. In our SNES Classic Edition review, we’ll break down what makes Nintendo’s retro game box so special.

A good deal of the SNES Classic’s appeal is the box itself. Measuring 4.25″ x 5.125”, it’s a meticulously designed miniature version of the original Super Nintendo. Every mark, down to the original seams where the pieces of the case fuse, is identical with the original. There are even etchings in the plastic to show where the controller ports and console slot would be, if they still had a purpose.

Even more miraculous, though, are the elements that work just as on the original device. The bright purple power and reset sliders are not just there for show, and the small power light on front of the device is functional. While this isn’t complicated technology, such attention to detail makes the device feel like a proper tribute to the original. Nintendo could’ve added a simple on-off toggle and called it a day.

The controllers, too, are near-perfect replicas of the original SNES gamepad. Like the NES Classic, they connect using the Wiimote controller port, which means you can (in theory) use them with SNES games on the Wii and Wii U. This also means you should be able to use the Wii classic controller with the SNES Classic.

Nintendo’s inclusion of the removable panel suggests how the Classic looks on a shelf is just as important as its ability to play games.

The most novel thing about the controllers, though, is that there are two of them. With two controllers in the box, you’re able to play two-player games without buying an extra peripheral.

The front of the Classic has a removable panel that hides the console’s real controller ports, which is a double-edged sword. Including this panel has allowed Nintendo to keep the original, non-function controller port locations, which helps the SNES Classic retain the original’s look.

On the other, keeping the panel down while you’re playing ruins the device’s aesthetic, and it’s an extra, fiddly bit to mess with before you play.

Nintendo’s inclusion of the panel suggests the Classic’s ability to look good on a shelf is just as important as its ability to play games. That isn’t unfair. We used the NES Classic for only a few weeks before it became more decoration than game console. It’s important, then, that the SNES Classic retain the original’s profile.

As a modern device, the SNES Classic has an HDMI port for video connectivity, and a micro USB port for power. Gamers should note the console comes with short back-end cables. Under normal circumstances that wouldn’t be an issue, but the cords can feel restrictive when you set up the device, because you need to use the power and reset buttons on the console to switch games.

The biggest problem with the NES Classic was its obscenely short controller cable, which was just two feet long. The SNES Classic controllers have a much longer cable — about five feet. That’s still a bit short, so gamers with a large living room may have to rearrange some furniture before playing.

No matter your set up, you’ll want to sit with the SNES Classic hardware within arm’s reach, because there’s no way to switch games using the controller alone.

You can hard reset the current game by holding start and select, just as you could on the SNES. In fact, you must reset it from time to time, because it’s the only way to return to the game select screen.

That’s an odd decision. Sure, this is a retro game console – but it’ll be used in a modern setting. The short cables and mandatory resets don’t help it fit in a modern living room.

What about the games!?

Enough about the box. Let’s talk about the games. The SNES Classic comes with 21 titles, which are accessible through a simple selection screen that pops up when you turn the console on. Each game is a perfect port of the original SNES version.

While the roster is substantially smaller than the NES Classic, which had 30 games, the SNES Classic lineup feels tighter. While most SNES fans probably have a list of the games they’d love to see, the Classic features most of the major games associated with the console, including many of our favorites. That said, fans always want more, so the fact that Nintendo decided to include fewer games feels like an odd step backwards, especially since the console costs $20 more than the previous model.

On the other hand, the SNES Classic surpasses the NES Classic (and possibly every other retro collection ever made), because one of its games is brand new. Star Fox 2, the sequel to the Super Nintendo’s 3D graphics showpiece, was all but finished before Nintendo decided to shelve the game in 1995 to make way for the Nintendo 64 (or so the legend goes). Its inclusion with the SNES Classic gives the console an exclusive title that even PC-based game emulators can’t claim.

Otherwise, the games look and feel exactly like you remember them, right down to their hitches, glitches, and localization quirks. While it may be annoying that Nintendo and Square Enix didn’t correct “Vicks” to “Biggs” in the opening of Final Fantasy III, there’s something to be said for presenting the game with their imperfections intact.

If you played any of these games when you were younger, the nuances of the controls, and even level details, may come flooding back into your mind. There’s something about playing an old game, completely unchanged, with the controller its meant to be played on, that feels special. The SNES Classic captures that sensation better than any other emulator, remaster, or retro adaptation.

Like the NES Classic, the SNES Classic adds a few modern conveniences to the Super Nintendo experience. You’re able to create save states, which allow you to save any game at any time. In addition, the SNES Classic adds a new feature called “rewind,” which allows you to look at the last few minutes of your latest gameplay session, and jump in prior to where you stopped (presumably before you messed up and/or died).

Both these features work perfectly, save for one annoying design flaw. They are both tied to the reset button on the SNES Classic hardware, which brings you back to the SNES Classic menu. Since there is no way to return to the menu via your controller, both functions are far more arduous than they need to be — especially rewind, which would be much more useful if it were instantaneous.

While the games only play in 4:3 aspect ratio with vertical black bars on either side of the screen, the Classic features a set of customizable side bars, which lets you spice things up a bit. Once you start playing games in earnest, it feels like they disappear. In fact, rather than feeling hamstrung, many of the game may look better than before, thanks to your brighter, sharper modern TV.

The menu also gives you the ability to add one of two filters, which accentuate the games’ retro design. There’s a “CRT” filter, which adds scanlines and slightly fades the color palette, and a “pixel perfect” mode, which recreates the game in its purest, blockiest form. The original “4×3” mode looks the best, but CRT mode goes a long way to making games look like they did on the original SNES, if you’re going for pure authenticity.

The SNES Classic Edition comes with a one-year limited warranty from Nintendo.

Like the NES Classic before it, the SNES Classic Edition will let you relive gaming’s past without hassle. It’s a cool collector’s item, and an opportunity to share old-school game experiences with gaming’s newest fans.

There is no device like the SNES Classic, but there are many other ways to play most of its games. Almost of them are available a la carte on past Nintendo consoles, including the Wii U and 3DS.

You can also emulate the games on a PC or smartphone, often for free. Downloading game ROMs is a legal gray area at best, and you should be aware of that before downloading them.

There is also original Super Nintendo, as well as a litany of devices that play SNES cartridges, such as the Retron 5. These provide a more authentic SNES experience, though that may require tracking down original cartridges, which can be complicated and expensive.

While it is not cheapest option, the SNES Classic Edition offers best balance of authenticity and convenience without any legal ambiguity. You can snag a good number of the console’s most popular games for an affordable price, and play them with very little research or set-up. That’s well worth $80.

Playing through all 21 games would take hundreds of hours, but that isn’t really the point, is it? The SNES Classic is a time capsule, which you can take off shelf and enjoy whenever you feel nostalgic.

Yes. Whether you want to indulge your nostalgia for the Super Nintendo, or introduce the console’s best games to new gamers, the SNES Classic Edition offers quick and easy access to a bygone era. The $80 price tag may seem steep at a glance, but we think it’s great value for the concentrated nostalgia trip the console provides.