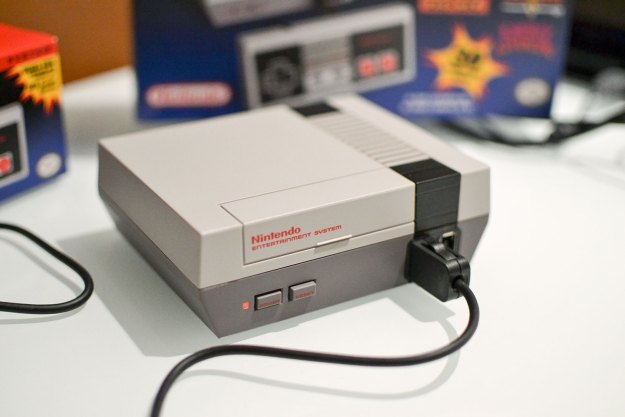 “The NES Classic Edition is the most fun and affordable way to play NES games.”

Updated on 5-16-2017 by Gabe Gurwin: Added information on discontinuation to introduction.

Nintendo has always held its game library close to its chest. For years fans have been forced to buy new Nintendo consoles to play both the newest entries the company’s beloved franchises, and the classic games of its past. Nintendo finally loosened its grip with the NES Classic, a small emulation box that lets you play 30 NES games on modern TVs, giving Nintendo fans a more affordable way to access its some of its NES canon without buying a Wii U or 3DS.

I say “machine” and not “computer,” because, for many, the word computer carries certain expectations: The NES Classic Edition does not connect to the internet. There is no authorized way to upgrade its hardware, buy games through it, or alter it in any way. It is a toy for those who want to play these games as they remembered them and nothing more. As such, it isn’t meant for tinkerers, modders, and hardcore retro game enthusiasts who already have access to these games elsewhere: Yes, there are legally gray means of playing all these games and more on your PC or through similar, unlicensed third-party emulator boxes, but for many that option is too complicated or is otherwise unpalatable. Though the system has since been discontinued, and is very difficult to find, the NES Classic Edition offers uncompromised nostalgia for those who may not have otherwise sought it out.

The little game-box that could

The first thing you’ll notice about the NES Classic is that it is tiny and adorable. At 5” x 4” x 1.75” (width x length x height), it is roughly the same size as a streaming box, like Roku or Apple TV, but is much more pleasant to look at. It is a very detailed miniature replica of the front-loading NES Console, from the two-tone plastic shell, to the red text, “Nintendo Entertainment System,” on the front of its “door.”

Of course, the door is actually just etched into the plastic. The NES Classic Edition does not need cartridges for every game. Instead, you simply plug in its power cable, connect its HDMI cord to your TV, and press the power button on the console. The device jumps right to a menu where you can select a game and start playing.

Similarly, the NES Classic comes with a replica NES controller, which looks and feels identical to the original. The controller connects to it using the same port found on the bottom of the Wii remote, which means it can also be used to play NES games through the Wii or Wii U virtual console. Conversely, it also means that players with a Wii Classic Controller or Classic Controller Pro can use those as well. The console has two controller ports, and 16 out of the 30 games offer some kind of two-player mode, which is a lot of fun.

All these features are well and good but, as we said, the NES Classic Edition is first and foremost a place to play games without distraction. The console’s biggest benefit, the fact that it offers a large number of games for a set price with no game store or advertising, also means that you will not be able to customize their game libraries to your liking.

While many players will wish they could swap out one or two games for their personal favorites, it’s a very good list overall, with many of the console’s first- and third-party classics. The populist approach is especially valuable for new NES players: The NES Classic Edition is, in it’s a way, a time capsule for a new generation of gamers. I would hope that anyone interested in making video games (or writing about them) would know most, if not all of these.

On a technical level, the NES Classic does an excellent job emulating the original console. There is no noticeable input lag from the NES Classic controller and there is something to be said for playing the games on the controller they were made for. The games just feel “right,” somehow. If nothing else, it is possible to get caught up in the moment and forget that this is an approximation.

There are a few technical flaws, though. Playing Metroid we found a couple of rare, but noticeable framerate drops in specific situations when too many enemies moved on screen. We also found that two games, Kirby’s Adventure and Super Mario Bros. 3, featured a vertical bar which cut off animation on the far left side of the screen. While disappointing, none of these issues ruin the experience of playing the game. However, it is worth noting that they are the kinds of flaws Nintendo might have been able to fix if the NES Classic Edition could connect to the internet.

On a software level, everything about the virtual console is designed to help you play NES games the way you would have on the original device. The games run at a 4:3 ratio, rather than the 16:9 ratio of the modern widescreen television. Though you might assume that having black bars on either side of the game screen would be annoying, having such large edges around it really completes the experience. Plus, the games generally look and feel better running in their original resolution.

The NES Classic Edition offers uncompromised nostalgia for those who may not have otherwise sought it out.

If you really want to complete the experience, there’s a “CRT Filter,” which adds scan lines and blurs some of the sharp pixelated corners to replicate the look and feel of an old TV set. As you might expect, some games benefit from it, and other don’t: Super Mario Bros. 3 looked exactly the way I remember playing on a friend’s TV set years and years ago, but Pac-Man simply looked kind of dull. Generally speaking, though, it is an uncanny simulation and you should at least try it if you’re old enough to have played an NES on a CRT.

There are some modern conveniences, as well. The device gives you the ability to create save states at any time, similar to how you would on a PC-based emulator. You save your game by pressing the reset button on the console, which send you back to the menu, and pressing the down button to look at the game’s save slots. Rather than letting you manage storage on your own, the console simply allows four save slots for each game. Some games also have classic means of saving, such Metroid and Mega Man 2, which use passwords, or Kirby’s Adventure, which has a save system.

The NES Classic’s commitment to its nostalgic premise is not completely to its benefit, however. On the hardware side, they stem from the fact that the NES Classic Edition requires users to use the buttons on the console to switch games or turn the machine on and off, rather than include a way to do that through the controller. While it is in line with the experience of playing the NES and a novel way of making these buttons relevant, it is a pain to get up or lean over and press the button every time when modern consoles offer a dedicated button to handle these functions.

The controller, however, offers the device’s biggest flaw. Using an NES controller offers a surprisingly thrilling trip down memory lane, but the cable is too short. At just 30 inches, it will not be possible for most players to use the console while sitting on their couch. I managed to avoid rearranging my living room by stretching the included 5-foot HDMI as far as possible and leaning forward on my couch, but it was still an ugly and uncomfortable solution.

The NES Classic Edition is not perfect. It has some design flaws inside and out. Despite those flaws, the small emulator box offers a high-quality experience for a very low price, just $60. As we mentioned before, there are other ways to play NES games, and they may work fine for you, but this does offer many lapsed Nintendo fans the new opportunity to play old games, and that’s really cool.

If money were no object, the best option for emulating the NES right now is probably the Wii U, combined with a NES Classic Edition’s controller and a Wii remote (both of which can be purchased separately). This option would allow you to circumvent the NES Classic’s controller cord and reset button issues and gives players the option to buy the exact games they want. However, price does matter to most of us, and spending hundreds of dollars on a soon-to-be defunct game console seems like a mistake.

As a product of nostalgia that has no connection to a server that could be turned off someday, the NES Classic Edition does not adhere to a gaming hardware cycle. It’ll last until it breaks.

Yes, if you do not already own a Nintendo console and want to play some NES games for old time’s sake. If you already own a Wii, Wii U, or have access to a library of NES games, then it is a stylish, but superfluous accessory, and its high price from third-party sellers might be asking too much.