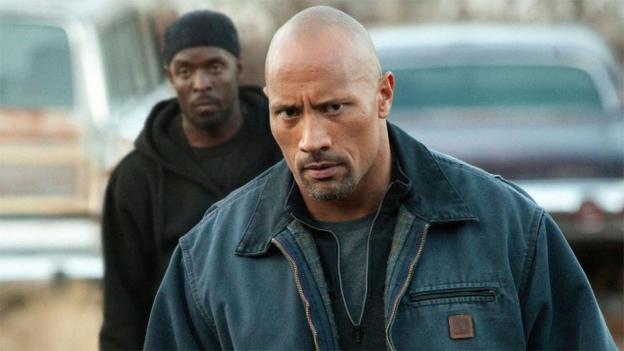 For every action-movie star who proves himself capable in other movie genres, there’s a handful of other big-screen brawlers who never quite find their comfort zone outside blood-and-bullets cinema. Over the last ten years, Dwayne “The Rock” Johnson has done a nice job of proving he’s one of the former and not the latter with films like 2003’s action-comedy The Rundown and a role in the 2005 comedy Be Cool that was one of the few bright spots in an otherwise disappointing movie. In Snitch, Johnson ventures further outside the straight-up action genre with a tense thriller that proves he he doesn’t need to punch, shoot, or body-slam anyone to carry a movie.

Directed and co-written by former stunt actor Ric Roman Waugh, Snitch follows trucking company owner John Matthews (Johnson) as he attempts to infiltrate a dangerous drug-dealing operation in order to save his son from an unjust prison sentence handed down by federal prosecutors. As he gets pulled deeper into the murky waters of drug trafficking and a complicated undercover investigation, Matthews finds himself uncertain of where to turn for help protecting himself, his son, and everyone close to him.

Despite the potential for some intense action sequences, Snitch remains relatively free of butt-kicking moments – especially where Johnson is concerned. The story and tone remain firmly entrenched in the world of dramatic thrillers, and Johnson does a nice job of playing Matthews as a believable fish-out-of-water in the violence-prone drug world who looks terribly out of place amid all of the gritty dealings going on around him.

And that’s the real magic of Johnson’s performance in Snitch: his ability to play a compelling character despite his size, not because of it.

At no point in Snitch does Johnson’s character seem to consider violence as the first – or last, for that matter – solution to the problems he encounters throughout the story. There’s no moment when he gets fed up with a henchman and throws him through a window or overcomes a cartel kingpin with a brutal blast from a shotgun. He’s just a big guy from the suburbs with a nice house and a pool, and Johnson does a fantastic job of testing the character’s limits without ever making him feel like something he’s not. By making his flaws and shortcoming seem very real, Johnson and Waugh make the character’s victories – and the stakes of what he’s doing – seem that much more real, too.

Snitch isn’t entirely a one-man show, though, and a good performance by former The Walking Dead standout Jon Bernthal makes the film feel like a more complete, satisfying package. Bernthal was one of the pleasant surprises to come out of AMC’s hit zombie-apocalypse series, and he carries his supporting-character role well. An ex-con and reluctant participant in Matthews’ plan, Bernthal’s character is almost as interesting as Johnson’s family man, and Waugh is smart to give him the screen time he deserves.

The Wire star Michael Kenneth Williams, also serves up a good performance as local drug boss Malik, though his role in Snitch is considerably less complicated (and memorable) than his run as Omar Little in the hit HBO series. The cast is rounded out by Susan Sarandon as a cold U.S. attorney who agrees to let Matthews work off his son’s sentence, Barry Pepper as a federal undercover agent who looks like a refugee from Breaking Bad, and Benjamin Bratt as cartel kingpin Juan Carlos “El Topo” Pintera. The League actress Nadine Velazquez plays Matthews’ wife, but barely factors into the story with any screen time. None of these supporting roles add much to the overall film, but they’re also generally problem-free performances, so they don’t take away from the movie, either.

And while the film insists that it’s based on actual events that have transpired due to the controversial federal sentencing laws that encourage offenders to inform on each other, there’s little about Snitch that feels preachy. The story never dwells on the minutiae of the federal laws, opting simply to present a scenario in which the laws’ flaws are obvious and then get on with the story. It’s a storytelling decision that makes the best use of the cast and their talents, and things move along at a nice pace without becoming bogged down in showcasing the unfairness of the characters’ predicaments.

Audiences hoping to see Johnson beat up bad guys and carve a bloody path to his son’s freedom are likely to be disappointed by the relatively action-free Snitch, but anyone looking for a tense thriller that showcases Johnson’s acting chops (and provides Bernthal with a nice, meaty role after The Walking Dead) should be pleased by what Waugh and his team deliver. A safe, compelling story that keeps its audience guessing, Snitch offers up even more evidence of Dwayne “The Rock” Johnson’s big-screen potential outside of traditional tough-guy roles.

How to play the Yakuza games in order