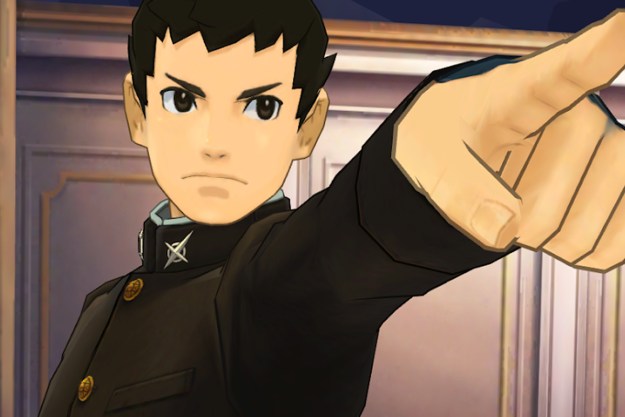 “The Great Ace Attorney Chronicles is a must-play for fans of the series and anyone interested in visual novels.”

When it comes to visual novels, Capcom’s Ace Attorney series is a cut above the rest. The series started with the first entry, Phoenix Wright: Ace Attorney on the Gameboy Advance. Its popularity has carried it to a new age and after being a Japanese exclusive title for six years, The Great Ace Attorney Chronicles series has finally made its way to the West.

The Great Ace Attorney Chronicles bundles together the two titles of the prequel spin-off series. These games take everything that made past entries so great and mixes them with a new time and location — the end of the 19th century in Meiji Period Japan and Victorian Britain. This archaic setting presents new ways for court cases to be solved and new roadblocks for returning fans of the series looking to reach a verdict.

While the first game in this duology felt almost too familiar at times and even somewhat unfulfilling others (due to this being a special Ace Attorney title where the story isn’t standalone and is further expanded in 2), being able to play both titles back to back solves that issue. The package deal, along with the great additions to the series, makes the long wait for The Great Ace Attorney Chronicles well worth it.

The Great Ace Attorney Chronicles starts in very familiar territory and grows into a unique story, earning an identity that somewhat separates it from the modern tales of the mainline Ace Attorney series. For certain fans, that separation may feel like a drag, with the first of the title being almost too similar to the previous installments. Thankfully, the amazing characters and charming writing keeps things interesting. I found myself highly invested in where things would go next.

The first entry begins in Japan with Phoenix Wright’s ancestor and protagonist Ryunosuke Naruhodo on trial after his alleged murder of Dr. John H. Wilson, a university professor. In this first trial, Ryunosuke’s law-studying best friend, Kazuma Asogi represents him in court.

After Ryunosuke’s innocence is proven, along with his judicial awakening, the two travel to Great Britain where Asogi will finish his studies and debut in court. This trip kicks off a series of events that pushes Ryunosuke further into his calling of being a lawyer with his new partner, Susato Mikotoba, and English detective Herlock Sholmes at his side.

These characters and their interactions are really what make this spin-off so worthwhile. They each feel unique and even rival the charm of older characters present in the mainline entries. I immediately found myself falling in love with Asogi in particular, as I expect many will. He and Ryunosuke’s courtroom dynamic quickly made them my favorite duo in the series.

These characters and their interactions are really what make this spin-off so worthwhile.

As with each game in the series, there are various court cases throughout the story and players will uncover more secrets that appear along the way. That’s as far as I can speak on the story. The narrative twists are what make Ace Attorney so special, so the less players know going in, the better.

Like previous games in the series, the gameplay is the typical investigation and trial formula. However, certain twists have been introduced to better suit the time period, with trials getting the most noticeable changes.

The new Dance of Deduction mechanic is a notable addition. Whenever Herlock Sholmes starts getting the facts and reasonings together it’s up to Ryunosuke to point out the contradictions in his rapid-fire logic spurts. To do this, players need to take a close look at all of their evidence. This entails quite literally turning said evidence upside down to find clues that Herlock may have missed, which can lead to a different conclusion.

Meanwhile, trial segments are much different than the main series. They’re a bit closer to the Witch Trials in the crossover title, Professor Layton vs. Phoenix Wright: Ace Attorney. Players will still be up against the series’ usual penalty system while pressing a witness and presenting evidence to find testimonial contradictions, but players may have to cross-examine multiple witnesses at once this time around. Another mechanic taken straight from the Professor Layton crossover is the ability to interrupt a witness’ dialogue to investigate further and get closer to the desired truth and verdict.

Once players reach the English court system, another twist makes itself prevalent with the addition of jurors who decide a final verdict along with the judge. Throughout the trials, these jurors can change their minds according to how they feel about the case at hand, with each having individual thoughts. Players will appeal to the jury and can even use one juror’s statement to find a contradiction in another’s.

One excellent new courtroom feature is Summation Examination. The new mechanic arises whenever jurors all agree on a guilty verdict. When it happens, players can call for a Summation and attempt to sway the jury out of its guilty vote.

These fresh gimmicks made these two spin-offs my favorites of the series.

All this appealing makes it evident that this court system is nothing like Ace Attorney veterans have ever played. Like in the Professor Layton crossover, the court is much more archaic. Players won’t use technology and surefire proof to get a desired verdict, but will need to present logical explanations while finding flaws in those of others to succeed.

These fresh gimmicks made these two spin-offs my favorites of the series. They make the games feel so unique and more dynamic than ever. Trust me when I say that your first moment with Sholmes’ deductions will change your life. These new mechanics are brilliant and I hope they return in some form with the next mainline series entry.

A bit too familiar

While the games feature plenty of fresh ideas, the first game does have some familiarity issues. This first half of the chronicles’ story feels a lot like the original Phoenix Wright trilogy’s plot, which at times left me uninterested beyond watching the characters interact and grow. It quickly became evident that this first entry was mostly just a setup to lead into the more unique sequel.

The dragging pace of this first half was pushed even further by some court cases feeling as if they went on for way too long. Though I enjoyed it, starting with the first case I’d find myself thinking, “Wow are we still going with this case?” I feel as if that may be a byproduct of the environment the title is placed in and that this spin-off was initially very experimental.

The environment itself is another weak point in the first entry. The Great Ace Attorney doesn’t really use the setting and its limitations to the fullest. There were points where I felt that the same things could have been accomplished with another modern era Ace Attorney instead of going the 19th-century route.

It quickly became evident that this first entry was mostly just a setup to lead into the more unique sequel.

Certain highlights, new mechanics, and the superior sequel balance out the package. The second game improves on the first in just about every way, including how it uses setting — though some of the game’s modern technology tools do feel like a cheat.

I found The Great Ace Attorney Chronicles to be more than worthy of the long-running series, with both games quickly becoming two of my favorite entries. It can be a bit of a struggle at first, but this spin-off quickly finds its own unique voice and uses its individuality to its full benefit.

The Great Ace Attorney Chronicles is a must-play for fans of the Ace Attorney series and the visual novel genre as a whole. It’s a perfect jumping-in point for anyone interested in the genre or series. Though it has a few slow points, strong writing and charming characters are enough to make up for its weaknesses. I found myself wanting more, thanks to those strengths and the highly enjoyable new mechanics.

With both titles running around 30 hours each, the entire package should take around 60 hours to complete. Though, there’s not much replay value due to the nature of visual novels.

Some players wanting a darker and more active experience may enjoy the popular Danganronpa series. It’s one I’d highly recommend investing time into if you enjoyed your time with any Ace Attorney and vise versa.

Yes. This double pack gets an easy recommendation to anyone looking for a good visual novel to sink their teeth into.

Topics
How long is Xenoblade Chronicles 3?
How to play the Yakuza games in order
How to set up two-factor authentication on Twitch
Xenoblade Chronicles 3: Release date, trailers, gameplay, and more
Despite divisive dialogue, Forspoken gets a lot right about open-world games
The best RPGs for the Nintendo Switch
How to link your Fire Emblem Engage and Fire Emblem Heroes account
Xbox and Bethesda’s Developer_Direct: how to watch and what to expect
Goldeneye 007 comes to Game Pass and Nintendo Switch later this week
The best iPhone games in 2023: 31 games you need to play right now
I can’t believe I’m recommending Forspoken on PS5 over PC
Redfall’s May 2 release date revealed during Developer_Direct
The best Fire Emblem games, ranked from best to worst