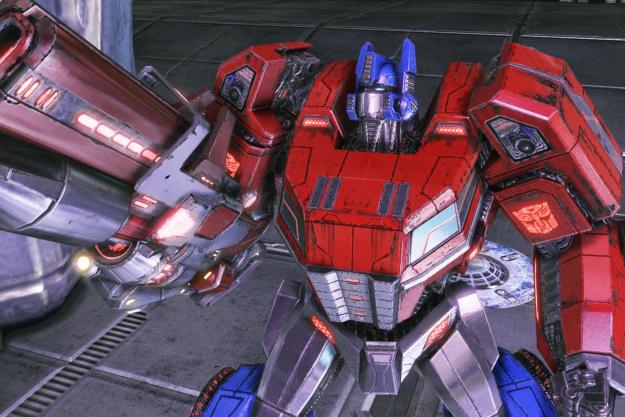 “Transformers: Rise of the Dark Spark is an insultingly overt cross-marketing bid that isn't worth your time.”

Transformers: Rise of the Dark Spark has lots of issues — think of it as death by checkboxes — but none cripple it more than the underlying lack of ambition. This is the worst kind of paint-by-numbers game development, a completely uninspired third-person corridor shooter that’s been built on the bones of an older, better game.

Blame developer Edge of Reality if you wish, but everything about Dark Spark suggests that the studio was given a strict design document and a truncated schedule. Levels built around fan-favorite characters? Check. Fire-breathing robo-dinosaur? Check. Wave-based survival, mystery box unlocks, and profile-wide level progression? Check, check, and check, mate. Most of it works like it’s supposed to, but like a tofu version of your favorite cut of steak, the execution lacks flavor.

Transformers: Rise of the Dark Spark has lots of issues, but none cripple it more than the underlying lack of ambition.

The story’s blatant attempt at cross-promotion doesn’t help. High Moon Studios established a new series timeline inspired by the first-generation, G1 stories of the ’80s cartoon series in its War for Cybertron/Fall of Cybertron games. It’s a separate continuity from the one that exists in Michael Bay’s Paramount-produced blockbusters, the latest of which – Transformers: Age of Extinction – is out now. Dark Spark makes an ungainly attempt to join the two.

The titular Dark Spark is an ancient relic from Cybertron that’s got the ability to tear open holes between dimensions. It pops up first in the film continuity, at the site of a meteor crash. Lockdown, the latest movie’s big bad guy, manages to escape with the Dark Spark in his possession, and he uses its power to reach Cybertron, circa War for Cybertron. An alternate history plays out from here, with a plot that spans both timelines. It would feel forced if it weren’t so incoherent.

Competitive multiplayer is gone – bafflingly, given High Moon’s success with it in War and Fall – but the Horde-like wave-based survival of Escalation remains. These are more focused battle spaces than anything the story mode provides, with fixed offensive/defensive emplacements that up to four players can make use of to keep the swarming enemies at bay.

As a distillation of the campaign’s best bits – namely the combat – Escalation stands as the most entertaining hook in this release, especially since level progression carries between both modes. It’s just not enough to carry a premium package on its own.

Dark Spark’s functionally sound play is built almost entirely around action that emphasizes aggressive mobility. This is a run-and-gun, not a cover-based shooter. There’s a surprisingly deep arsenal of upgradeable primary/heavy weapons, but loadout selection ultimately comes down to deciding how far you want to be from the enemy that you’re shooting in the face. If your favored play style is anything other than “destroy everything quickly,” this isn’t the game for you.

As a distillation of the campaign’s best bits – namely the combat – Escalation stands as the most entertaining hook.

Edge of Reality injects a few fresh ideas. Leveling up and completing challenges rewards players with Gear Boxes, which spit out a randomized assortment of Autobots/Decepticons, weapons/weapon upgrades, and consumables. Of these consumables, HACKs offer temporary XP bonuses in exchange for an assortment of difficulty tweaks (think Halo’s Skulls) and D-pad assignable TECHs act as medkits, ammo boxes, and the like.

If only Rise of the Dark Spark didn’t seem so bland and slapped together. Environments consist of same-y corridors and open spaces that are replete with monster closets. Recycled textures grace every new space. Even the robots, typically a highlight in these Transformers games, don’t pop with the same level of detail that they normally do. There’s not even enough visual flash to justify playing this on a newer console.

Worse still is the ever-present sense that Dark Spark needed more time to cook in the QA labs. It’s evident whenever you come to a difficulty spike that falls just a bit too much on the side of impossible. Or when you reach a platforming sequence in which the space between jumps doesn’t feel quite right. That’s all on top of the various bugs and technical hiccups that result in slowdowns, stuck characters, and occasional untriggered checkpoints.

This isn’t a video game; it’s a series of focus test-approved bullet points, all patchworked together and painted over with geek-friendly transforming robots. It’s exactly the sort of licensed game that sells big, and its release is timed to the latest movie, so why even bother trying? Edge of Reality’s talents occasionally peer around the abundant rough edges, but it’s not enough. Transformers: Rise of the Dark Spark feels more like a casualty of cross-marketing demands than a victim of sloppy development.

This game was reviewed on an Xbox One using a code provided by Activision.