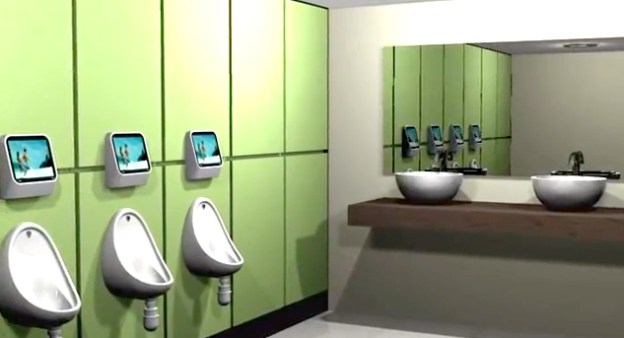 In most pubs and bars, going for a pee involves just that – emptying your bladder, washing your hands and returning to your table. However, take a pee in The Exhibit bar in south London and you’ll have an altogether different experience.

You see, The Exhibit has taken it upon itself to install in its men’s bathroom a number of pee-controlled video games; games with carefully thought up names such as Clever Dick and On The Piste. The system is thought to be the first of its kind in the world, and besides making a trip to the bathroom more entertaining, it will also be an opportunity for advertisers to promote their products.

Developed by UK-based Captive Media, the high-tech urinals come with 12-inch LCD screens fitted just above them. Ads play on the screens until a punter approaches the urinal. Detecting that the punter is in position and ready to pee, the system then switches into gaming mode.

“Sophisticated algorithms then allow the user to do something simple, but VERY engaging – controlling the system just by aiming their stream left or right!” the blurb says on Captive Media’s website. So with the skiing game, you’re able to navigate the course with some subtle but deft movements. How well you do at the game is entirely in your hands, so to speak.

The pee-controlled urinals are the brainchild of Gordon MacSween, a man who is effectively paid too pee. “We tend to drink a lot of water so that we can test the product more often,” he told London’s Time Out magazine.

MacSween said that when the system was trialed at a bar in Cambridge recently, a couple of behavioral changes among the peeing public were noted. “There has been less mess, which we sort of expected because we designed the game so you’re not splashing about, and less vandalism,” he explained.

“When we put it in, people thought it’d be ripped off the wall within a week, but it’s still there after four months. Because people are having a laugh, there’s a lot less vandalism. People just tend to get less angry.”

At one point MacSween was baffled by players’ ability to achieve scores far above anything he ever got. After talking to some customers, he found out why. “It turns out people were learning how to stop and start (their pee flow) to get higher scores.” So if you ever find yourself peeing for points, you know exactly what to do.

The Exhibit bar opened its new bathroom on Friday. It’s quite possible that for the first time ever in a UK drinking establishment, there’ll be more people lining up for the bathroom than for a drink.

It’s not known what, if anything, Captive Media has planned for the women’s bathroom.