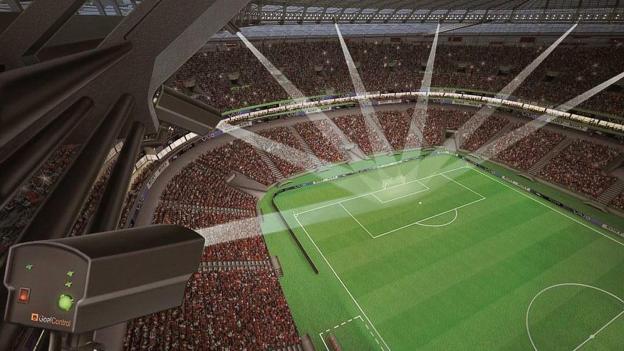 The Confederations Cup – a technically meaningless international soccer tournament that serves as a warm up for the up-coming World Cup’s host nation – got underway this past weekend. The opening match, in which Brazil trounced Japan 3-0, was the first time a FIFA-sanctioned game employed goal line technology to assist officials in determining when a goal has been scored.

Soccer has been slow to adopt technology in conjunction with its officiating, which should come as no surprise – this is a sport where the length of any given game is kinda sorta guestimated on the fly by the head referee. This can seem preposterous to fans of American football, who are bombarded by tech. Most of us probably think the yellow line indicating the first down marker magically appears and disappears on the stadium grass and not just our TV screens, and our referees spend more time “under the hood” than mechanics do.

What finally inspired soccer officials to make a change was a disallowed goal during a match between England and Germany in the 2010 World Cup. The blatant error was an embarrassment to the game, but certainly not the most poorly refereed match involving the German team.

Ironically, the International Football Association Board contracted with a German company, GoalControl for its goal line technology. The system uses 14 cameras (seven per goal) installed on a catwalk, each able to capture about 500 images per second, to track the trajectory of the ball in real time. If the cameras detect a goal has been scored, the system sends a vibrating signal to a watch worn by all the on-field officials. According to FIFA, the technology is to be used as a resource in determining disputed goals and will coincide with replays on stadium big screens (yes, American football fan, this is a new concept in international soccer).

Unfortunately for supporters of the technology, none of Brazil’s goals in Saturday’s game were ever in dispute, so the tech wasn’t put to the test. If you were watching the game, you were alerted to goals the old fashion way – everyone else cheered while you were away from your seat, getting a ‘cacharro-quente’  and a soda. Still, the Confederations Cup runs through the end of the month; considering how often soccer goals are in dispute, that should prove more than enough time to bring the technology to bear.

Photo finish: Here’s how the cameras at the Olympic finish lines actually work
This projector-powered augmented reality game takes climbing to a whole new level
InsideCoach smart soccer ball aims to keep kids active
U.S. women’s 2015 World Cup victory sets viewership record
The Ninja Blender just got a HUGE price cut for Cyber Monday
Capstone Connected launches its smart mirrors built for all lifestyles
The best smart treadmills
This NordicTrack elliptical is $500 off — and it will arrive by Christmas!
Tonal vs. Mirror
How to change the time on a Fitbit
The best exercise tech to help you crush your 2022 fitness goals
Withings Body Scan scales go far beyond just showing your weight
This light bulb can track your sleep and monitor your heart rate from afar