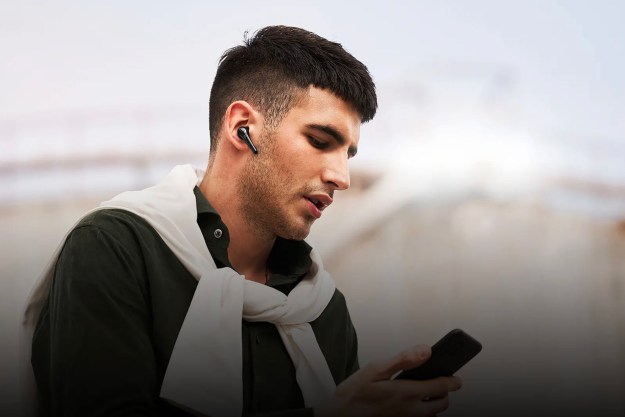 Earlier this year, 1More launched its $60 ComfoBuds, an inexpensive alternative to Apple’s AirPods. Now the company is back with its $95 ComfoBuds Pro, which — unsurprisingly given their name — is an attempt to target would-be AirPods Pro buyers. With a hybrid ANC system and a more secure fit, they definitely tick a lot of boxes that folks are looking for in a new set of true wireless earbuds, but how do they stack up in terms of sound quality, battery life, and other key features? Let’s take a look.

1More has a habit of using non-recyclable materials for its boxes, like closure magnets, plastic, and foam, and the ComfoBuds Pro are no exception, but there is less of these materials than with previous products, so at least it’s a step in the right direction from a sustainability point of view. Inside the box, you’ll find the charging case, the earbuds, a total of four sizes of silicone ear tips, a USB-C charging cable, a drawstring carry case, and a surprise: Two thick, silicone rubber shells that can be attached to the charging case for added protection, something we’ve never seen before in a set of true wireless earbuds.

Available in gloss black or matte white, the ComfoBuds Pro look a lot like the original ComfoBuds, but with one key physical difference: The Pro are equipped with silicone ear tips that create a seal around your ear canal, whereas the ComfoBuds simply sit inside the outer ear. The long and sleek stems, which narrow to a fine point at the ends won’t be everyone’s idea of a good design, but I think they look elegant, and they make for a nice alternative to all of the existing stem and stemless designs we’re seeing these days.

The charging case is small and light and its rounded lozenge shape is comfortable to hold or to stick in your pocket. The lid opens and closes easily, but feels a bit thin, which might explain 1More’s decision to include the protective rubber shells. The hinge feels similarly delicate and it doesn’t keep the lid from closing accidentally when in the open position — a minor quibble.

The lack of wireless charging is an unfortunate omission, but at $95, we’ll cut 1More some slack — tons of more expensive earbuds still don’t have this handy feature.

Those rubber shells, while a good idea on paper, are a little awkward when used. The included tape strips on the inside of the shells keep them stuck to the case’s bottom and lid, but because there aren’t any ridges or other grip points around the case’s edges, it’s easy to end up peeling the rubber shell away from the case when you’re opening the lid. It’s also very easy for dirt and dust to make their way between the case and the rubber shell, which will eventually cause all manner of small scratches.

One thing you won’t have to worry about is sweat: With an IPX4 rating for water-resistance (the same as the AirPods Pro), you can take them for a run if you want to.

The ComfoBuds Pro are indeed very comfortable. They use the same general shape as the AirPods Pro, but they use larger silicone ear tips and have a smaller body. In fact, in comparing them to several other in-ear-canal earbuds I have on hand, they’ve got the smallest overall size of any of them. This translates into an earbud design that most folks will find comfortable enough for all-day use.

Experimenting with the various eartip sizes should get you a secure fit as well as the best possible sound and ANC performance. They’ll have no problem staying put when out for a walk, but they might not be the best choice for vigorous, high-impact activities.

The touch controls are easy to use and for the most part, they’re quite responsive. Because the earbuds are so slender and (in the case of our black test unit, quite slippery) you’ll need to be precise when you tap as it’s easy to not quite hit the small area of the earbud that responds to touch.

You can customize the controls in the 1More Music app, but you’ll still be forced to make some tough decisions. There are only three gestures: Touch and hold, double-tap, and triple-tap, and there’s no way to assign different functions to each earbud. Moreover, touch and hold is dedicated to the ANC mode function, which means that for the two remaining gestures, you’ll have to pick: Do you want play/pause, volume up/down, track skip forward/back, or voice assistant access? You can have any two, but that’s it.

These earbuds will be great music companions no matter your favorite genre.

One way to cheat this a bit is to take advantage of the built-in wear sensors. These can be configured to auto-pause and play (when you remove and re-insert an earbud), auto-pause only, or do nothing. With auto pause and play selected, you could use this feature instead of assigning play/pause to one of your two available gestures. The sensors trigger instantly and the ComfoBuds Pro are super easy to remove and re-insert thanks to those long stems.

You can use one earbud at a time, and Bluetooth range is excellent — I was able to put a full two stories between the ComfoBuds Pro and my phone before the signal began to cut out.

The ComfoBuds Pro sound great. They don’t deliver quite the same level of performance as the AirPods Pro, but they come close enough that if Apple’s buds are your only point of comparison, the 1Mores are a helluva good deal.

Their sound signature is a pleasant balance that edges ever so slightly toward the low-end. The soundstage is wide enough to get a good feeling of immersion, and the bass produces the kind of depth you need to enjoy bass-heavy tracks. There’s a tiny bit of muddiness in the midranges, and you don’t want to push the volume too high — it can get harsh once you’re north of about 75% — but overall, these earbuds will be great music companions no matter your favorite genre, as long as you’re not expecting a critical listening experience.

The ComfoBuds Pro have the best ANC you’ll find in a pair of sub-$100 true wireless earbuds.

My only criticism is that 1More chose not to include an EQ adjustment within the Music app.

Last year, I reviewed the 1More True Wireless ANC, the company’s first true wireless earbuds to feature noise cancellation. I found the ANC feature needed work, and it certainly wasn’t up to the standards set by Sony, Apple, Bose, or Jabra.

The ComfoBuds Pro, on the other hand, are surprisingly good, especially for the price. Not only is the ANC effective at substantially reducing outside sounds, it’s adjustable too, with settings for strong, mild, and wind reduction, in addition to off and transparency mode. There’s a small amount of hiss noticeable when you don’t have music playing, but even so, I’m going to go out on a limb and say that the ComfoBuds Pro have the best ANC you’ll find in a pair of sub-$100 true wireless earbuds.

The only thing that prevents them from being a slam-dunk in this department is the three-mode switch that 1More forces on you when you use the touch-and-hold gesture: There’s no way to jump between your chosen strength of ANC and transparency without first cycling through the off position. If 1More can give us the ability to eliminate the off position from this gesture, perhaps in a future firmware release, it will be a big improvement.

Speaking of transparency mode, it is also very good. Some earbuds with this feature end up favoring sounds that are further away, leaving your voice sounding muffled. Not so with the ComfoBuds Pro — they open up the whole world, which is exactly how this feature should work.

1More claims the ComfoBuds Pro will get six hours of battery life with ANC on, with another two charges in the case for a total of 20 hours. Turning ANC off bumps these numbers to eight and 28 hours respectively. From what I can see, these numbers are fairly accurate. They’re not stellar, but when you consider that the fast-charge feature lets you grab a 2-hour boost from just 15 minutes of charging, it’s more than enough to get you through a full day of listening.

Like the ComfoBuds, the ComfoBuds Pro have good call quality. Your voice comes through clearly and with a surprising amount of depth. As with most true wireless earbuds, they struggle occasionally to suppress background sounds, but overall, as long as you’re not trying to close a million-dollar deal while standing next to a construction site, the ComfoBuds Pro are just fine for phone calls.

Good sound, good ANC, and great comfort — that’s not bad for a $95 set of true wireless earbuds, and it should make the ComfoBuds Pro an attractive alternative to Apple’s pricey AirPods Pro.

No — at least, not at this price. The ComfoBuds Pro’s closest competitor is the $100 Earfun Air Pro, a great-sounding set of true wireless ANC earbuds. The Earfun Air Pro aren’t quite as comfortable as the ComfoBuds Pro and their ANC/transparency functions aren’t as effective, but they have great battery life and slightly more water resistance.

The 1More ComfoBuds Pro come with a one-year warranty. Despite their IPX4 rating for water resistance, the earbuds and charging case don’t appear to be built with ruggedness in mind. To get the longest life out of them, you’ll need to treat them carefully.

Yes. They may not sound quite as good as the AirPods Pro, but with very effective ANC, transparency, and call quality — plus one of the most comfortable fits we’ve found — they’re a great value in a set of true wireless earbuds.