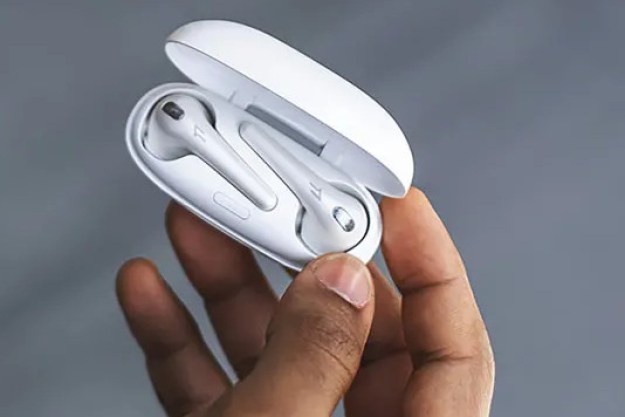 “The sound quality won't wow you, but they're tiny, comfortable, and affordable.”

Most of the true wireless earbuds you’ll find out there share a common design: They seal your ear canal with silicone or rubber eartips. It’s a good approach for sound quality — the more you can prevent external sounds from entering the ear, the better the audio from the earbuds will sound. But it can also create fit problems — especially if the company doesn’t include a good selection of eartips. Then there are the folks who just can’t stand the feeling of having something wedged into their ears.

It’s one of the biggest reasons that Apple’s original AirPods continue to sell so well. They simply sit inside your outer ear, and there’s no twisting or messing around with eartips required. At $149 (without wireless charging), AirPods are not exactly cheap, which has paved the way for lower-cost earbuds that offer the same features as the AirPods. The latest company to try this is 1More, with its $60 ComfoBuds. The name pretty much says it all: These affordable earbuds put an emphasis on comfort. But has 1More made a true AirPods alternative or just another knockoff? Let’s take a look.

Inside the basic white cardboard box, you’ll find the ComfoBuds nestled in their charging case, a USB-C charging cable, and an instruction booklet. It’s mostly recyclable, except for a layer of black foam lining the top box lid. Before using the ComfoBuds, you’ll need to pull them out of the charging case so you can remove a few protective plastic strips from the charging contacts.

Available in black or white, the ComfoBuds and their case are made from high-gloss plastic. Digital Trends received a black review unit, and if you look closely at the case, you can see tiny, subtle flecks of blue enamel under the surface. It’s quite eye-catching, at least for the first few seconds after you open the box. After that, the glossy surface quickly becomes a fingerprint pizza and you wonder why 1More didn’t include a microfiber cleaning cloth in the box.

Smudges aside, the ComfoBuds are incredibly compact. Instead of using Apple’s cigarette box approach to loading the AirPods vertically in their case, 1More lays the ComfoBuds on their sides. This gives the case an elongated lozenge shape, made even more so by its gently rounded corners and edges.

All of that slippery, glossy plastic can make it tricky to free the buds from the case, but 1More suggests that you use your finger to roll the ComfoBuds toward you, and that does seem to work.

The buds happily snap back into their charging crevices with no effort at all and stay put until you need them.

True to their name, I found the ComfoBuds very comfortable. Even after several hours, I barely noticed them.

The charging case lid is the only weak spot. It feels thin and cheap, and it doesn’t open very far. Once open, there’s no notch in the hinge to hold it in place, so it flops around a bit. You can’t fully open it when charging it — something you have to do with the included cable as there’s no wireless charging option.

Finally, 1More claims an IPX5 rating for the ComfoBuds, which is decent. That’s more than enough water protection for sweaty workouts — just don’t dunk them in water.

True to their name, I found the ComfoBuds very comfortable. Even after several hours, I barely noticed them. The portion that sits in your ear is shaped very similarly to the Apple AirPods, which in turn are similar to that company’s EarPods. If you’ve ever tried any of these other earbuds and found them comfy, the ComfoBuds should feel just fine.

Tiny rubber gaskets are installed around the speaker openings, which are presumably intended to make the fit a bit more secure, but they didn’t make much of a difference for me. That’s probably a good thing: When they eventually wear out and fall off, you won’t miss them.

There’s almost no mass to the ComfoBuds, which means they’ll stay put even when working out — as long as your workouts aren’t too intense.

Like the vast majority of earbuds right now, the ComfoBuds use tap controls. These can be fully customized in the 1More app, with playback, call, volume, track, and voice assistant triggers, but you only get two gestures per earbud: A double tap and a triple tap, which somewhat limits what you can do from the earbuds themselves.

Taps are usually well-recognized, but I found that reaction times were a bit slow. The gap between a double tap for play/pause and my iPhone actually playing or pausing was up to 2 seconds.

On the other hand, the auto-pause/play feature (also configurable in the app) works like a charm, instantly reacting when you remove or reinsert an earbud.

The ComfoBuds can certainly deliver clear and precise sound, but they suffer from a lack of deep bass.

Device pairing is another bright spot: Flip open the lid and the ComfoBuds connect immediately. Bluetooth multipoint would have been nice (for pairing two devices simultaneously), but as long as you’ve initially paired the ComfoBuds to a second device — and they’re not still connected to the first device — they can switch back and forth as quickly as you can toggle your Bluetooth preferences.

Bluetooth range is a little less impressive. Indoors, I wasn’t able to stray more than about 20 feet before I lost contact.

Earlier, I mentioned that the more you can prevent external sounds from entering the ear, the better the audio from the earbuds will sound. Unfortunately, the opposite is also true.

The ComfoBuds can certainly deliver clear and precise sound, but they suffer from a lack of deep bass. If you’re in a busy environment, some kinds of audio will be hard to hear.

My usual torture test for this is to listen to my favorite podcasts while walking along busy streets. The ComfoBuds do a great job with spoken word content, but those words will get drowned out by outside sounds.

Turning up the volume is usually the answer, but this can risk hearing damage if you’re not careful. On the other hand, the earbuds don’t get all that loud. At 80% volume on my iPhone 11, I found myself wishing there was more power on tap.

But let’s put this in perspective. The AirPods aren’t especially noteworthy for their sound quality either, but they deliver slightly better overall performance when compared to the ComfoBuds. This is most noticeable in the lowest frequencies. If you’re not a big bass fan, this might be a point in the ComfoBuds’ favor, and at least their semiopen design means you can carry on a conversation without needing to remove an earbud.

It’s possible the ComfoBuds might sound better if you could tweak their EQ, but the 1More app doesn’t currently offer that option.

Bottom line: The ComfoBuds are just fine for casual listening, but if sound quality is a top consideration, you should definitely look at the many excellent earbuds at this price that offer an in-ear-canal design.

It’s a bit odd that a set of earbuds like the ComfoBuds, which place an emphasis on long-term comfort, have been given batteries that only last four hours per charge. This puts them near the very bottom of the true wireless earbud category, and their charging case doesn’t help much — it only extends that play time to 18 hours.

Call quality on the ComfoBuds is good … you’ll have no trouble being understood.

This would have been easier to swallow if the ComfoBuds had a quick-charge system, like the AirPods, but no such luck. It takes about 85 minutes to recharge the buds once they’re dead.

Call quality on the ComfoBuds is good. Most competing sounds are very effectively canceled, wind noise doesn’t appear to get picked up much, and your voice — while not crystal clear — is certainly clear enough that you’ll have no trouble being understood.

The highly pocketable 1More ComfoBuds make for a very affordable AirPods alternative, with great comfort for those who hate the feel of silicone ear-tips. They won’t please audiophiles, and their batteries barely get you through a day, but as long as these downsides aren’t deal breakers for you, the ComfoBuds are definitely worth considering.

Since the ComfoBuds are semiopen true wireless earbuds, it’s not appropriate to compare them to earbuds that use a closed design. And while it’s certainly possible to buy semiopen earbuds with better sound quality, battery life, and features like wireless charging, you will have to pay way more than $60.

If you’re OK with that, I recommend checking out the $149 Oddict Twigs. They’re just as comfortable as the ComfoBuds, but they sound far better and have quick-charging and a wireless charging case. I think their aluminum-clad stems also look really good.

Backed with a one-year warranty from 1More, the ComfoBuds will probably last as long as any other set of true wireless earbuds at this price, but keep this in mind: As their battery capacity drops over time, you’ll be left with less endurance than models that start their life at six hours or more.

Yes. If they were any more expensive, I’d hesitate, but for their price, I think they deliver the kind of affordable AirPods alternative most people are looking for.

Topics
Apple AirPods Max 2: what we know, what we want, and how much it will cost
Best Samsung Galaxy Buds deals for December 2022
Best AirPods Max accessories for 2022: cases, stands, and more
A Canadian grocery store is selling second-gen AirPods for just $89
Best 75-inch TV deals: Get a large screen for the Super Bowl
Flash sale drops the price of this 55-inch QLED 4K TV to just $370
Netflix expands its spatial audio, number of devices that can download content
Sony’s 2023 AV receivers are Sonos-ready and work with wireless speakers
Rode’s NTH-100M headphones are built for gamers
The best movies on Disney+ right now (February 2023)
Perfect for the Super Bowl, Samsung’s Frame TV is $1000 off
Save 40% on Peacock Premium when you subscribe today
How to watch Super Bowl 2023