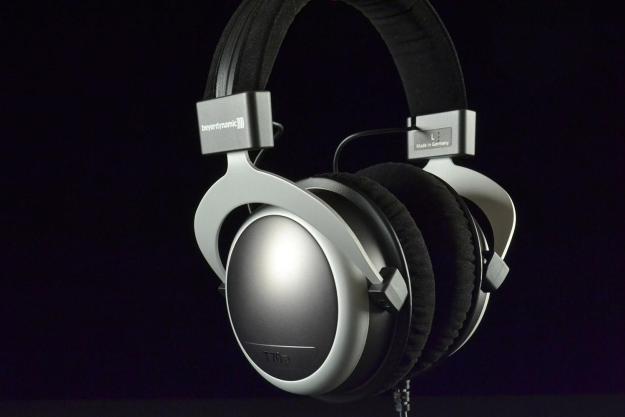 “For the audiophile on the move, or at home, Beyerdynamic’s T70p make a spectacular choice.”

Beyerdynamic’s Custom One Pro, pretty much blew us away. Those cans served up clear and powerful sound, featured adjustable bass ports to customize the listening experience, and exhibited solid build quality, all for a price well below their competition. For us, the combination struck a rare balance of quality and affordability – the apogee for music lovers on a budget.

This time, we decided to jump up a few levels into what might be considered the upper-middle class in the company’s lineup, the T70p. Handmade in Heilbronn, Germany from high-grade components, the headset’s price tag (around $500) puts it out of reach for the casual listener. However, the ‘p’ in the model name stands for ‘portable’, making the T70p a different animal than most premium headsets we test.

Using its proprietary ‘Tesla’ voice coil technology (hence the ‘T’), Beyerdynamic claims the T70p can achieve professional-level accuracy with an impedance of only 32 Ohms. In essence, that means you should be able to drive the headphones with something as basic as a smartphone instead of requiring a dedicated headphone amplifier. If that’s true, it would make the T70p ideal for the audiophile on the move. We dug deep during several long listening sessions to find out.

Beyerdynamic doesn’t mess around when it comes to extraneous details, and the T70p’s succinct packaging is itself a lesson in German efficiency. The cardboard box is nothing but a thin shell, barely concealing a large zippered case of soft black letherette within. Opening the case’s wide lid revealed a deep layer of grey foam, with the T70p nestled snugly at the center.

As we removed the large chassis from its bedding, we were introduced to a stout device, with heavy-gauge metallic arms gripping large circular shells. The earpieces shone dully with sleek, opaque bands of copper-grey around the exterior, accented with a healthy coat of microfiber around the pads and headband.

Unwinding the headphone cable gave a distinct impression of the hands that had bound it, as even the twist ties appeared to be clasped with the same care you’d expect from a piece of custom-built gear. A gold plated 1/4-inch adapter was already secured to the 90-degree angled jack. The case’s only other occupant was a small booklet of multi-lingual instructions.

As solid as the build quality of the T70p appeared, we were surprised to find what looked like a touch of axle grease on the slim arms that secure the earpieces to the headband as we pulled them down to adjust the size. The silver strips slid almost precariously into the grooves, feeding into black inserts that had a lot more give on the vertical axis than we expected. However, the grease rubs off, and as we soon found out, the arm pieces’ leeway serves to provide an impressive level of adjustment.

Beyerdynamic claims the T70p can achieve professional level accuracy with an impedance of only 32 Ohms.

The T70p’s velvety-black microfiber stretches over a thick layer of padding encircling the interior of the ear cups as well as the entire underside of the wide headband. The soft skin meets at the topside of the headband at a surprisingly clunky line of plastic, another strange indication of the headset’s dichotomous blend of luxury and frugality. Still, we’re always hoping such signs indicate the emphasis on engineering over aesthetic, and the smooth, two-toned finish on the oversized ear cups goes a long way in conveying quality.

The ear cups are suspended from their slim metal arms on dual axes, allowing for plenty of horizontal movement to supplement the vertical give of the arms themselves. Pushing the heavy pads together while music is playing creates almost complete silence, exhibiting the T70p’s excellent passive noise isolation. Inside the pads rest extremely wide screens which cover the headset’s Tesla-powered voice coils. Beyerdynamic claims an enormous frequency range for the drivers of 5Hz-40kHZ which, incidentally, is over twice the maximum range of human hearing.

Simply put, the T70p is one of the most comfortable headsets we’ve had the pleasure of putting on. While fit is always subjective, the ear cups are large enough to cover almost any ear size, and the headset’s ample padding provided a generous level of support. Though the microfiber coverings could potentially cause some overheating at high temperatures, we had no issue in a normal setting. We wore the headset for hours at a time, unable to dig up a single warranted complaint.

A metaphor that kept cropping up while examining the T70p’s sound signature was that of natural light. White, clean, and vividly transparent, the headset seemed to expose everything it touched with a gleaming brilliance. Like sunlight, there were moments during our evaluation where sounds were a shade bright, especially in relation to higher percussion. But the T70p also had a prismatic effect when focused through the lens of our music library, revealing every element in a multicolored projection to create a gorgeous display before us.

True to its claims, the T70p seemed to run very efficiently from our iPhone 5, revealing a wide horizon of detail and accuracy even at low velocity which puts it on a different plane than most headphones in its class. That said, we still preferred listening through our MOTU 896HD converter; power requirements aside, you can’t beat a good DAC, and the T70p really opened up with our higher-quality components. Also, although they warmed up after a break-in period, the headphones sounded more aggressive in the treble than we care for while using our iPhone as a source.

… the T70p is one of the most comfortable headsets we’ve had the pleasure of putting on.

We started our listening by diving into the most complex productions in our collection, which inevitably led us back to Radiohead. Hey, what can we say? Those clever Brits really know how to mix a record. We use “Codex” from King of Limbs as a sort of high frequency test track, and the T70p passed with flying colors. Every phase shift and dynamic fluctuation was outlined in sparkling detail. We were able to follow the swirling harp synth at the beginning like a river as it flowed through the undercurrent of the cavernous soundsphere. The french horns were pure and silvery, and the expanding high-frequency vacuum of sound at the end was perfectly divulged, from its white noise gestation to the wooden click at the finish, pulling our eardrums along as it transitioned discreetly into the next track.

Shifting gears to some other clever Brits, we next pulled up Beggars Banquet by the Stones, and were treated to a level of detail we’d expect from a recording studio control room. Rich and buttery sound came from the dirty tape of “Sympathy for the Devil,” and we heard brand new details we’d missed before, like insidious laughter and subtle room chatter. As the collage of percussion instruments built, the piano was opened like a strange machine, revealing a deep combination of wooden timbres, room noise, and plate reverb echo. When we got to the middle, the high overtones of Keith’s immortalized guitar solo were accentuated with a cutting presence, like an electric guitar machete.

Moving on through a wide variety of genres, there were several more revelatory moments, including a run through Paul Simon’s One Trick Pony that was stunningly detailed. “That’s Why God Made the Movies” accented a drier texture in the percussion adding to a brilliant wash of colors and textures, including the extremely tactile upper keyboard, which seemed to drip in fine points of light into the lower register. The T70p’s detail continued to surprise us the longer we listened, reaching deeply into every song we tested.

The highlight of the T70p’s sound was clearly focused from the midrange up, but the headset offered plenty of power in the bass when called upon. Hip-hop tracks from artists like Kanye and The Game showed off a concrete wall of low-end force, seeming to foreshadow a massive depth behind it. Though the grooves didn’t rumble into the midbass with the overt pressure of bass-heavy headphones, the T70p still hit all the notes with firm precision. That said, for our own preference, we wished for some more warmth in the low end overall.

Beyerdynamic’s T70p took us on an elegant tour of deep textures, spatial dimension, and vivid detail, the likes of which are hard to find, even at its $500 price tag. On top of that, the headset is supremely comfortable, allowing us to listen for hours at a time. As for portability, while we love the idea of taking audiophile sound with us, we did miss some warmth in the lower layers; an issue which was exacerbated when using an iPhone as our source. Still, bright or no, the supreme detail always grabbed us by the tail before we could complain. For the audiophile on the move, or at home, Beyerdynamic’s T70p make a spectacular choice.