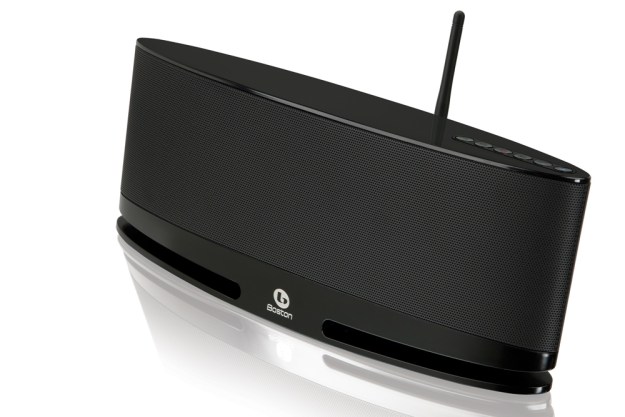 “We weren’t disappointed with the MC200Air’s sound quality, but we weren’t exactly bowled over by it, either.”

If you are a speaker company in 2013, you’re more or less expected to offer some sort of speaker dock or wireless speaker. If it offers AirPlay, so much the better, as this will no doubt lend your brand some of the clout that comes along with being endorsed by Apple. But having an already recognizable brand name brings along its own benefits when it comes to the crowded wireless speaker market.

Boston Acoustics is one of the most recognizable brands in the speaker business. The company has been around for a long time – since 1979, actually – and its entry into the mobile audio category in 1983 helped to propel its name forward, as custom car audio was a big deal in the 80’s and 90’s. As such, the brand needs little introduction for most folks – and that’s just our point. When you are comfortable with a brand, chances are you will be comfortable with its new products.

With that in mind, we expect that Boston Acoustics’ MC200Air AirPlay speaker will probably grab some attention. The question is: Does the MC200Air’s performance warrant that attention, considering it faces such stiff competition? We gave the speaker a thorough test drive; here’s what we think.

Breaking the MC200Air out from it box revealed it to be a surprisingly light and relatively compact elongated oval of a speaker. The light weight makes for a portable and easily mountable speaker, but it is rarely a foreshadowing of great audio quality. We remained optimistic.

The top of the MC200Air is made of gloss-white or gloss-black plastic (which we found was easily scratched and attracted fingerprints), depending on your color choice. The right edge of the top panel is outfitted with six control buttons for power, mute, Air input, aux input, and volume up and down.

Just behind the control buttons and on the back of the speaker is a small antenna for improved Wi-Fi reception. Further down we found an Ethernet port, USB port, power adapter jack,  and setup button. On the left edge we located two 3.5mm jacks, one for aux input to cater to any non-iOS device, and the other for headphone ouput – a nice touch we don’t often see.

In the box with the MC200Air was its power supply, AC cord and a remote control.

The MC200Air houses two 3.5-inch full range drivers, meaning those two little speakers must handle both bass and treble output. The driver’s enclosures within the speaker are ported on the back to help boost bass response.

Speaking of bass, Boston Acoustics has outfitted the speaker with what it calls BassTrac circuitry. Essentially, this is digital signal processing (DSP) which allows engineers to control how the speaker sounds and behaves. It keeps bass levels in check as the volume increases, ensuring that high output levels don’t take the 3.5-inch drivers out of their comfort zone and risk getting damaged in the process. The technology certainly has an effect – more on that in the performance section.

The MC200Air offers a few playback options in addition to AirPlay. The speaker is DLNA compatible, so it can be controlled by any number of DLNA apps to stream music stored on any networked computers or NAS devices. There’s also that USB port we mentioned, which functions not only to charge devices, but also offers wired playback from iOS devices.

Aside from looking perfectly attractive on any desktop, table or bookshelf, the MC200Air can also be mounted to a wall by way of two keyhole mounts situated on the back of the speaker.

Getting the MC200Air connected to your wireless network is no more or less hassle than most of the AirPlay speakers we’ve tested in the past. This common process involves pressing and holding a setup button, selecting the speaker as a Wi-Fi access point, entering an IP address, selecting your home Wi-Fi router, entering a password, and hitting the “go” button. It’s a bit of a drawn-out procedure, yes, but par for the course. The good news is that the MC200Air’s connection reliability is outstanding. We never lost signal in our home, nor did we deal with any signal dropouts. We even unplugged the speaker for a few weeks, and when we plugged it back in, it connected to our router as if nothing had happened.

With a street price of $300, and no built-in rechargeable battery, we figured the MC200Air would need to sound pretty stellar to compete against the likes of the recently reviewed Pioneer A3, which sounded fantastic and does include a rechargeable battery, though admittedly for an additional $70 to $100.

In a nutshell, we weren’t disappointed with the MC200Air’s sound quality, but we weren’t exactly bowled over by it, either. It’s a perfectly decent-sounding little speaker, but a few quirks keep us from offering up an enthusiastic endorsement.

The speaker’s high-frequency response was better than we had anticipated from a system that lacks a dedicated tweeter. The MC200Air yields some decent detail in the lower treble regions and doesn’t get too aggressive with the really high-frequency stuff, but we did notice a sort of hardness to the attack of some instruments. Nothing to get all twisted up over.

Midrange response was just fine. We never felt as if vocals were muffled or, on the opposite side of the spectrum, sharp. Again, nothing to get upset over.

We did take issue with the MC200Air’s bass response, though, and we think that the BassTrac circuitry was likely responsible. While BassTrac kept the speaker from distorting when we really cranked it up, we felt bass response was artificially “plumped up” at low to moderate volumes. We would best describe the effect as a small speaker trying too hard to sound bigger than it is. In small rooms, the MC200Air tended to sound a little muddy, as a little too much midbass resonated in the room. In larger rooms, however, the fattened up midbass helped to warm up the room, giving forth that “room-filling” sound that seems so popular these days.  Also, we will note that the MC200Air doesn’t go particularly low, but, then again, we didn’t expect it to. The Pioneer A3 doesn’t get spectacularly low either, but it is in better control of its bass response.

The MC200Air is a quality product paired with some handy features, all wrapped up in an attractive package. Its wireless capability is stable and exceeds the range of those models which don’t offer an external antenna. As for sound quality, we weren’t blown away, but we must give Boston Acoustics credit for designing a very good-sounding speaker, and attempting to keep users happy by providing decent bass response that doesn’t pose risk to the small drivers it uses. If this speaker offered a built-in rechargeable battery for enhanced portability, we might be a little more enamored with it. But, as it stands, the MC200Air elicits a rather tepid response and, therefore, an average rating.