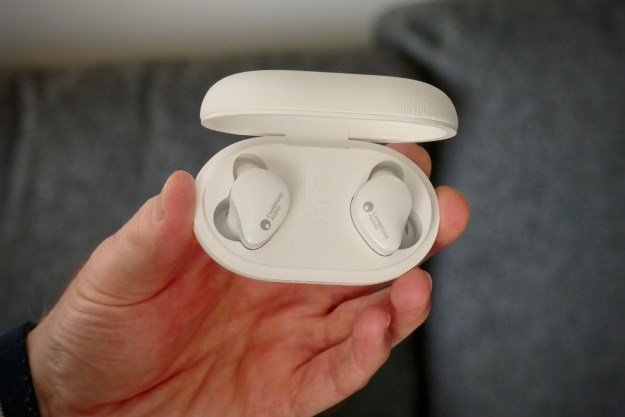 Cambridge Audio has taken its Melomania 1 true wireless headphones upmarket with the new Melomania Touch earbuds, complete with a revamped, delicate design and a plush charging case, all without drastically increasing the price so they don’t break the $150 barrier.

The original Melomania 1 earbuds may not have had the looks, but they definitely delivered Cambridge Audio’s much-vaunted “British sound.” Has Cambridge Audio changed that for the Touch models, and if so, is it for the better? Let’s find out.

Put the Melomania Touch alongside the original Melomania 1’s, and the two seem barely related. Cambridge Audio has replaced the cheap-looking plastic case for a larger, pill-shaped case covered in a pleasing, soft-touch “microfiber leather” material, in either black or white. On the front are five charge LED lights, and around the back is a USB Type-C charging port.

The case hinges open from the back and inside the earbuds are held in separate charging docks by strong magnets. The teardrop-shaped buds are very light at just under six grams and modestly sized — larger than the bullet-shaped Melomania 1’s, but smaller than Sony’s WF-1000XM3. The outer side is glossy while the body has a matte finish, and the buds are held in your ear by a silicone tip and a wing.

The swooping, rather delicate looks are a world apart from the first Melomania 1’s utilitarian package, and arguably closer to Bang & Olufsen’s E8 true wireless headphones, in terms of presentation and the “first opening” experience. The Melomania Touch comes with a selection of different silicon tips and wings to help you get the right fit. For me, I struggled with the tips as the mediums were a little too small and the large a little too big, resulting in one earbud not feeling as secure as I like, and becoming dislodged during face movements.

Neither ever fell out or even felt like it was a possibility, and it’s not the first time I’ve encountered this with true wireless earbuds. But I did feel the need to re-seat one bud on a regular basis, as it slowly worked itself out of my ear. The wings are small but effective. The outer panel contains the touch sensor, which can be personalized using the accompanying app.

The earbuds are comfortable to wear, and they haven’t caused my ears to ache even when I’ve worn them for several hours at a time. Overall, Cambridge Audio has successfully upped the appeal of its true wireless headphones with the design, materials, and presentation of the Melomania Touch, without sacrificing wearability or hitting us with a massive price hike.

I’ve been using the earbuds connected to an iPhone 12 Pro, and with a pre-release version of the app and firmware, which has been updated at least once since I started using the Melomania Touch. However, the overall sound has remained consistent throughout. The earbuds contain a 7mm driver that uses graphene for strength and rigidity, Qualcomm’s Clear Voice Capture technology for clear calls, a pair of microphones, and AptX and AAC codec support.

Cambridge Audio prides itself on delivering the “British sound,” which is broadly defined as a guitar-forward audio experience that doesn’t go to heavy on the bass, or overboard on the treble. In my experience, Cambridge Audio’s British sound has a pureness that’s unmistakable, which takes it a step beyond the delicious flat, vocal-forward curve heard from Japanese brands like Audio Technica.

The Melomania Touch aren’t quite as pure as the original Melomania 1, due to a far stronger and more hardcore bass response, but are still wonderfully balanced. Listening to the DubXanne remix of The Police’s Roxanne, the heavier sub-bass is extremely prominent, but it doesn’t over-power the beautifully judged mid-bass throughout the track. Boris Blank’s Electrified demonstrates a wide soundstage, and the warm mid-range is expertly blended with the hard bass kick. The guitars in Moses Mayfield’s Fall Behind have plenty of emotional presence, yet never detract from Mayfield’s vocals.

How about songs that prioritize vocals? Nogizaka46’s Synchronicity doesn’t sparkle quite like it should, and Sakurazaka46’s Nobody’s Fault stumbles and the backing becomes confused as the bass overpowers the vocals and mids, highlighting how the Melomania Touch are tuned for songs with a strong vocal performance matched to a simpler backing. Iz*one’s Sequence, for example, with its bright vocals mixed with a complex bassline and little else, sounds superb. Really, truly, get-up-and-dance superb.

The soaring orchestra and emotional vocal power which make up Aled Jones’s rendition of Händel’s Did you Not Hear My Lady? tell you everything you need to know about the Melomania Touch — they’re a class act that expertly balances masses of power, strong and controlled bass, and a deeply involving soundstage. How about Cambridge Audio’s “British sound?” To my ears, it’s there in spades, just with the bass amped up for greater effect.

The Melomania Touch connect using Bluetooth 5.0 and are complemented by an app for your phone, ready to deliver firmware updates, adjust the equalizer, turn on the transparency mode, and adjust other features. The earbuds are controlled using touch panels, and the functionality can be configured in the app.

I don’t usually like touch controls on headphones, due to them being a pain to properly locate and rarely being very responsive. Functionality is kept to a minimum here, with a tap to play or pause, and a double-tap to go forward or back, and I’ve found the controls to be reliable. You can take calls and select your voice assistant too, plus these additional features can be turned off in the app for simplicity. It’s one of the better touch control systems I’ve used, helped by the relatively large and flat earbud body.

The app is simple and easy to use. Battery levels for each bud is shown, but not for the case. There’s a graphic equalizer and some presets to change the sound (I left the equalizer on the flat “Balanced” setting for the review), and the option to change between a low power and a high-performance mode. In low power mode, listening time goes to nine hours, compared to seven hours in high-performance mode.

I couldn’t get this feature to work, which may be due to my pre-release app. It’s apparently a five-minute process to switch to low power, almost like performing a software update, but it failed each time I tried. This will likely be cured upon release. The transparency mode is good, letting just enough surrounding noise in to be safe without creating an uncomfortable artificial feeling.

The Cambridge Audio Melomania Touch do not have any form of active noise cancellation but do seal nicely in your ears to block out ambient sound. The lack of ANC does impact desirability, as many other true wireless headphones offer the feature for only a little more money.

I have no reason to doubt these numbers. I used the earbuds for several hours each day and the case reached its last battery light (there are five on the front of the case) on the ninth day, and according to the app, the earbuds were still fully charged. I’ve simply not worried about battery life at all. The case itself does take in excess of three hours to fully charge though.

The Melomania Touch cost $150 or 130 British pounds, and are available from January 1 through Amazon, Cambridge Audio itself, or from retailer Richer Sounds if you’re in the U.K..

The lack of active noise cancellation is really just a spec list problem, and I don’t consider it essential at this price, plus the Melomania Touch naturally isolate very well, and the bassy, emotional sound means you’ll crank up the volume regularly enough to drown out most annoyances anyway. The long battery life also makes up for this feature omission. I’ve not wanted to swap to my usual set of true wireless earbuds throughout the review, and really enjoyed the Melomania Touch’s often bombastic sound when listening to my favorite music.

The true wireless headphone world is a very busy one. We recommend the Jabra Elite 85t headphones, which can sometimes be found for less than the $230 retail price, and include active noise cancellation to go along with the excellent sound quality. However, the Jabra Elite 75t cost around the same as the Melomania Touch, and now come with active noise cancelation thanks to a software update, making them an excellent alternative.

The list goes on. I like the $199 Panasonic RZ-S500W, although they can’t meet the Melomania Touch’s long battery life, but do come with noise cancelation and a lovely neutral sound. Spend more and the $299 Master & Dynamic MW07 Plus are wonderful, as are the consistently hard-to-beat Sony WF-1000XM3.

Expect three or more years of use before you need to consider upgrading. The case is solidly made and well protected, the earbuds are made of strong plastic and have an IPX4 water-resistant rating for use in the rain and when exercising, so they should be durable. The long battery life makes a difference too, as even if your use increases over time, the Melomania Touch will still have the performance to keep up.