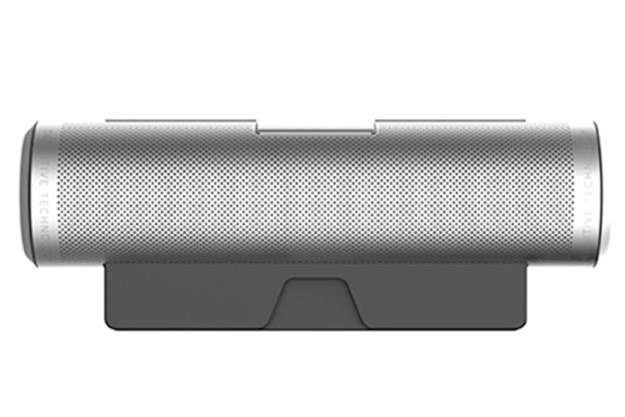 “Compact, portable, rugged and powerful, the Definitive Technology Sound Cylinder is everything we could want in a hybrid speaker/tablet stand.”

If you’ve ever used your smartphone’s built-in speakers for listening to music, or relied on your tablet’s speakers for watching your favorite show on Netflix, you already know what we’re about to tell you: The speakers built into mobile devices sound terrible. There are a couple of reasons for this. One is a matter of space (or lack of it); much like today’s flat-panel televisions, there’s simply no room for decent speakers and amplification in these ultra-slim devices. Of course, the situation also presents an opportunity for an add-on sale – say, a $200 pair of headphones – which is a real boon to retailers.

But for those interested in sharing the sound with others, a Bluetooth speaker is the better accessory. There’s no shortage of battery-powered Bluetooth speakers around – just check out our roundup of some recent entries – but there does seem to be a significantly shorter supply of clever devices like the Definitive Technology Sound Cylinder.

The Sound Cylinder offers a clever solution for laptop and tablet users who don’t want to deal with the hassle of external loudspeakers requiring a wired connection. Like the recently reviewed Carbon Audio Zooka, the Sound Cylinder can function as a stand for tablets or clip on to the lid of laptops to provide sound that is meant to be significantly better than any on-board speakers. We loved the Zooka’s design, but felt it could have offered slightly better audio quality – an improvement we think folks would be willing to pay more for. Given Def Tech’s reputation for high-quality sound, we had high hopes its $200 cylinder would deliver just that. Let’s find out.

Whoever developed the Sound Cylinder’s packaging deserves a raise this year. In a market flooded with boring cardboard boxes, Definitive Technology decided to deliver its latest device in a package that could just as easily house a nice bottle of scotch. Yes, the Sound Cylinder is packaged like a bottle of 25 year-old Glendronach.

The first thing that stands out about the Sound Cylinder is just how sleek-looking and compact it is. If not for the rubber clamp, one would swear Definitive Technology had stolen a baton constructed from aluminum/magnesium from the Games of London and stuck some speakers inside. If you are thinking of taking the Sound Cylinder with you on a business trip, you’ll appreciate that it is only 0.75 lbs and a diminutive 7.48 x 1.88 x 1.88 (WxDxH – in inches). When you extend the kickstand, the depth increases to 3-inches.

Even though the Sound Cylinder is light, that doesn’t mean it isn’t well constructed. Because Definitive Technology markets the product as a portable loudspeaker, we took that as an invitation to schlep it around for a week and see how it held up buried inside a laptop bag. We will discuss that later on, but rest assured, this thing is one solid piece of engineering.

Another standout feature that makes the Sound Cylinder unique is its magnesium covered clamp; which is designed for laptop screens and 7-inch or 10-inch tablets. The design allows you to watch your tablet in either landscape or portrait orientation making it particularly useful for watching movies on vacation.

The Sound Cylinder is powered by an 8-watt Class D amplifier which drives all three channels inside the enclosure. Don’t let the low power rating fool you – this little speaker can play extremely loud.

On the processing end, Definitive has used an Analog Devices ADAU 1701 DSP module with integrated DAC, which performs the signal conversion and application of what Definitive calls their “Active Surround Array technology”. The device processes SBC and AAC codecs when it receives a signal via Bluetooth.

On one end of the Sound Cylinder, you’ll find the power button and volume controls. The other end is home to a perforated aluminum grill which protects the 1.7-inch side-firing woofer.

The backside of the Sound Cylinder provides a number of connection options. The Lithium-Ion battery-powered loudspeaker connects to its wall adapter via a micro USB cable, and you can also connect a device such as a tablet, smartphone, or even turntable (seriously) via a stereo 3.5 mm input jack with the supplied cable.

The Sound Cylinder is designed to sit upright while holding your tablet thanks to its fold-out kickstand which we found provides a firm support base. Slide your tablet into the clamp, open the kickstand, place it on a solid flat surface, and you’re ready to watch movies or surf the web.

The Sound Cylinder connects via Bluetooth and has a range of around 33 feet (10 meter), though we experienced some drop-out when we moved in between floors in our home.

The Sound Cylinder’s battery took more than two hours to achieve a full charge. Definitive Technology claims that you should be able to get a solid 8 hours per charge, though we know from experience that play time will depend on volume levels.

This speaker is designed to work with iOS, Android, Mac, and Windows-based devices – anything that can connect via Bluetooth should work just fine. The only issue we found is that iOS devices need the latest OS update to connect.

Out of the box, the Sound Cylinder has a minimal charge, so we left it plugged in for two hours while we did some errands. Pairing the loudspeaker with a Samsung Series 7 laptop was relatively easy; it took about twenty seconds for the device to show up and connect.

Setting the ideal volume level will depend on the user but we found that leaving the Sound Cylinder’s volume one click below the maximum and adjusting with the laptop’s own volume slider achieved the best sonic results.

While the integrated kickstand works really well at providing a solid base, the angle does aim the speaker’s drivers a tad low, depending on the height of your surface. You’ll need to experiment with placement if you plan on watching in bed with the Sound Cylinder in your lap. We found that placing the speaker on a laptop desk while watching in bed tilted the loudspeaker enough to direct the sound higher, which improved the balance and sense of space.

When using a tablet, the clamp provides a secure grip and never interfered with the screen on either a Google Nexus 7 or Apple iPad 2.

Placing the Sound Cylinder on our laptop created two minor issues: the weight of the loudspeaker put some stress on the screen, and the rubber did cover a tiny portion of the screen. At no time did the clamp interfere with the laptop’s camera, we only tested the speaker with one laptop, so results may vary from one computer to another.

Since Sound Cylinder is marketed as a portable loudspeaker system, we took it on the road to see how it would deal with a little abuse. The speaker’s robust construction was a smart engineering choice on Definitive’s end because we think everyone’s going to want to take this everywhere. Yes, it really is that good.

When watching movies on your mobile device or laptop, the Sound Cylinder creates a near-field listening experience that will utterly transform how you watch streaming video content.

Being able to play loudly doesn’t make a device worth buying on its own, but the Sound Cylinder strikes the right balance between loud and transparent to make it a serious bargain. When we directed 24/96 FLAC files via JRiver Music Center 17 or Songbird to the speaker, it proved it was more than up to the task.

Vocals were clean and transparent. We threw a mix of Adele, Nick Cave, Richard Thompson, and Sam Cooke at the Sound Cylinder and it adeptly reproduced each artist’s voice, preserving the inner detail and micro-dynamics of each track.

We’ve always found Definitive Technology speakers to be rather crisp sounding; somewhat forward leaning with a cooler tonal balance, but also amazingly good at reproducing detail and space. The Sound Cylinder clearly comes from the same family. To get such a level of transparency from such a small transducer is a huge step-up for products in this category, but what impressed us the most was the slightly warmer tonal balance that made long listening sessions a real pleasure.

The Sound Cylinder is likely to be bombarded with a diet of MP3s, and while we think people need to give high resolution audio tracks a real chance, the loudspeaker elevates the lossy formats to a higher plane. You will hear detail, spatial cues, and texture that just don’t come through when listening to the internal loudspeakers on mobile devices. For those times when headphones won’t do the trick, a speaker like this is just what you need.

When watching movies on your mobile device or laptop, the Sound Cylinder creates a near-field listening experience that will utterly transform how you watch streaming video content. The bass driver can get a tad wooly if you play the volume too loud, but the improvement in dynamics gives films real presence and an expanded soundstage that will improve the sense of immersion.

Musically speaking, the Sound Cylinder doesn’t really favor one genre of music over the other, but it certainly has the chops to handle heavy metal or symphonic works. One evening while listening to Miles Davis’ Sketches of Spain, we closed our eyes and marveled at the depth of the sound, the airiness of the treble and how well the loudspeaker preserved the bite of horns without making us want to reach for the volume slider. Impressive, to say the least.

Between its innovative design, solid engineering, and first-class sound quality, it’s hard not to like the Definitive Technology Sound Cylinder. Not only does it work as advertised by turning any laptop or tablet into a portable 2.1 home theater, it has few issues that would preclude anything but our strongest recommendation.

We’d like to see the clamp put a little less stress on laptop screens, but this minor issue could be a design compromise intended to accomodate varying tablet thicknesses. Besides, such a small thing can’t alter the fact that the speaker offers a lot for only $200.