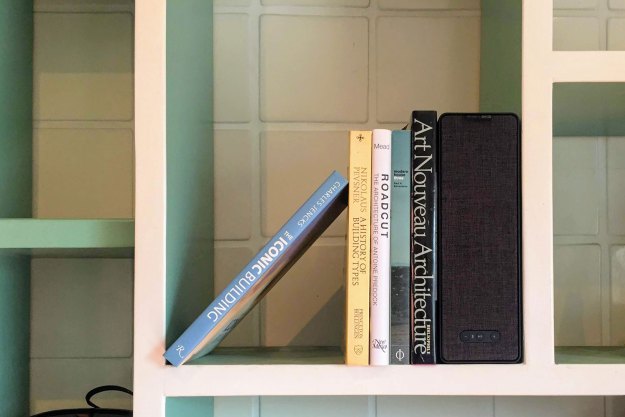 “The Ikea Symfonisk Bookshelf is everything we love about Sonos at a price anyone can afford.”

If you’re a regular Digital Trends reader, you know that we really like Sonos products. They blend great sound with one of the best software and setup experiences available to create a whole-home, wireless audio solution that has few real rivals. So when we learned that Sonos had teamed up with Ikea to create a new line of Sonos-powered speakers designed to blend in with your home decor, we were excited to try them.

The result isn’t just a set of Sonos speakers with an Ikea label — it’s an entirely new take on what a wireless speaker can be. There are two Symfonisk speakers — the $99 Bookshelf, and the $179 Table Lamp. This review is exclusively focused on the Bookshelf — we’ll also provide our impressions of the Table Lamp in a separate post.

Sonos has always hewed to an ultra-minimalist design approach, something that has prompted more than one observer to compare the company (favorably) with Apple. Its speakers are understated, with shapes and enclosures that call very little attention to themselves to put the focus where it belongs: The sound. The Symfonisk Bookshelf takes this minimalist approach to a new level, wrapping itself in a disguise to further help it disappear into your room’s decor.

About the height of a roll of paper towels when sitting vertically, the flat, fabric-covered grille is the only thing you see when you look at it straight-on. Dressed in your choice of Ikea Black or Ikea White (color-matched to Ikea’s furniture), the walls of the speaker cabinet are so thin they’re almost invisible. Placed in a bookshelf, among a row of tallish books, only a small Ikea/Sonos fabric label and a tiny white LED light at the bottom give away its purpose. You can turn the LED off in the Sonos app if you want, but don’t cut off the label — it’s actually the pull tab for the removable grill, a first for any Sonos-designed speaker.

As with virtually all Sonos speakers, the Bookshelf has no inputs or outputs, no USB, and no Bluetooth, offering just a single Ethernet jack tucked in the back. It doesn’t use an external AC adapter (those awful bricks that accompany most consumer electronics), which means that only a slim power cord remains to be hidden from sight. Even if you can’t completely disguise it, Ikea’s contribution to the power cord was to wrap it in a fabric braid. It won’t magically make it go away, but it’s a nice touch nonetheless. The back of the Bookshelf speaker has two grooves that let you run the cable vertically or horizontally — depending on the orientation of the speaker. A tiny set of rubber feet on the bottom and left side of the cabinet protect it and keep it from sliding in either position.

Most Sonos speakers have top-mounted control buttons, and now that I’ve had a chance to use the Bookshelf’s front-mounted buttons, I can see why. Unless the speaker is positioned at shoulder height, or higher, pressing these small, non-touch-sensitive controls can be a bit awkward.

Despite its ability to subtly take up residence on a bookshelf, that’s not why it’s called the Bookshelf speaker. Instead, it’s the speaker’s ability to literally become a bookshelf when attached to a wall using the optional wall-mount bracket, or wall hook – a clever play on the age-old speaker segment.

An entirely new take on what a wireless speaker can be.

You’d expect a wall bracket made by Ikea to be well-designed, and it is. Attached to the wall with two or more screws, and then bolted to the Bookshelf speaker with the help of four tiny hex bolts – this is, after all, an Ikea product — the $10 bracket lets the speaker seemingly float either vertically, or in bookshelf mode (horizontally). There’s no way to pivot the speaker when it’s in the vertical orientation, which seems like an oversight, but doing so would probably undermine its ability to sit flush to the wall when in bookshelf mode. An angled version of the bracket would be a nice option for those who want to aim the speaker into the room from a corner.

The bracket comes with a thin rubber membrane that you can place atop the cabinet to protect it from the few objects you’ll have room to store there. The instructions are quite specific: No liquids, and no open flames (fair enough). With a 10-pound weight-bearing capacity, you won’t be using it to display your cherished geode collection, but it should be more than robust enough for a small picture frame, house keys, and your phone.

Speaking of phones, it would be really cool if the Bookshelf featured Ikea’s Qi wireless charging system, but no such luck, at least for this first version. (We expect that would add a fair bit to the bottom line.) One thing you’ll need to contend with when wall-mounting the Bookshelf speaker is the power cord. If you opt for the black model, it’s a black power cord, while a white one comes with the white speaker. Given Ikea’s track-record for stocking spare parts at its stores, it may even be possible to buy a white cord later, which would help it disappear on light, or white-colored walls.

If you opt to use the wall mount, make sure you’ve got the right screws and wall anchors for the job — the Bookshelf speaker is deceptively heavy, and that weight will be sitting away from the wall. An accidental downward force could easily rip it out of the wall if it’s not mounted properly.

Can a $99 speaker designed to double as a bookshelf deliver the kind of sound quality we’ve come to expect from a Sonos product? Rest assured, while the Symfonisk Bookshelf may not look like your average Sonos device, it still sounds great.

To be clear, the Bookshelf is not as powerful or as full-ranged as a Play:1 or Sonos One. And yet, once you’ve performed Sonos’s Trueplay tuning, adjusted the EQ to your liking, and cranked up the volume, the Bookshelf effortlessly fills a medium-sized room with clear sound. Is it perfect? No. It suffers a bit through the midrange, and has a tendency to flatten vocals. If you really push the volume hard, some small vibrations from the cabinet become apparent.

It may not look like your average Sonos device, but it still sounds great.

More so than with Sonos’s other speakers, your choice of music will play a role in how much you enjoy the sound. Pop music, especially tracks like Mark Ronson’s Uptown Funk, were a good match for the speaker’s prominent highs and lows, while classical music and jazz did not fare as well in testing. As its shape suggests, the bookshelf delivers a very directional sound. As such, a single Bookshelf doesn’t create a very wide soundstage, but when set up as a stereo pair, two Bookshelfs (Bookshelves?) can place you right in the middle of the audience at a concert. It should be noted that you can only stereo-pair a Bookshelf with another Bookshelf, but we wouldn’t recommend you do otherwise anyway.

As tempting as it is to keep making comparisons to the Play:1, a $149 speaker that costs 50% more than the $99 Bookshelf, it’s a faulty comparison. I’ve never heard a powered speaker for $100 or less that sounds as good as the Bookshelf. Throw in all of the benefits of the Sonos app, like its universal search, massive support for music streaming services, and easy whole-home audio control, and the Bookshelf comes as close to a no-brainer as a budget home wireless speaker can get. If you’ve never used a Sonos product before, you’re in for a treat.

Whether you’re looking for a dorm-room speaker for back-to-school, a bedroom speaker, or even an affordable way to add a pair of surround speakers to an existing Sonos home theater setup, the Symfonisk Bookshelf’s price, features, and sound make a strong argument for putting one in every room in your home.

The Symfonisk Bookshelf and Table Lamp speakers go on sale exclusively at Ikea stores and online at Ikea.com on August 1.

With a highly accessible $99 price, the Ikea-Sonos Symfonisk Bookshelf brings the convenience of Sonos’s wireless sound system to a wider audience. The fact that it does so and still retains much of what makes a Sonos speaker worth listening to — all while being able to act as an actual working bookshelf — should put this speaker at the top of your list for a budget-friendly home audio option.

Not at this price. You may find $100 wireless speakers with features you prefer, like Bluetooth, speakerphone capabilities, battery-powered portability, or waterproofing (like the JBL Flip 4), but you won’t find the Bookshelf’s combination of sound quality and excellent Sonos wireless control. That said, you may want to spend more. The step up to the $150 Sonos Play:1 is a worthy upgrade from an audio-quality point of view, even if you can’t balance your cookbooks and phone on top of it.

If history is any indication, the Symfonisk Bookshelf will have a very long operational life. Sonos has a superb track record for continuing to support its products long after most manufacturers have cut and run. To put that in perspective: You can still use the very first Sonos ZonePlayer made in 2002 with a current Sonos system.

Yes. If you want the convenience of wireless music in a speaker that sounds great and doesn’t break the bank, there is no better option than the Symfonisk Bookshelf speaker. It’s a tremendous value.