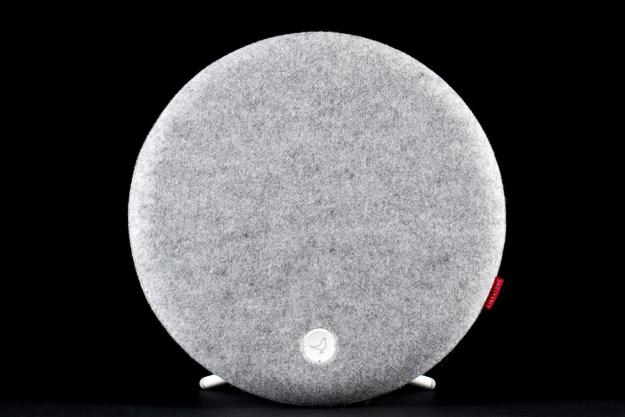 “The Loop’s design makes it a pleasant aesthetic addition to the modern home, but its sharp upper register and flat midrange put it far from the kind of eloquent and balanced sound we expect in a hi-fi device.”

Copenhagen-based Libratone makes some of the most interesting and unique wireless speakers you’ll find in today’s marketplace – and that’s saying something. The company’s small family of speakers are as spendy as they are stylish, with a Scandinavian form factor, a signature coat of wooly fur, and wireless support that can connect with your device via Wi-Fi or straight from the speaker over a proprietary system called Playdirect.

At $500, the Loop sits at the low end of the lineup, just above the company’s only fully portable model, the Zipp. Looking more like a furry satellite dish than a speaker, the Loop can be mounted on the wall or set on its tiny stand anywhere in your home. Its driver compliment involves a pair of “high precision” ribbon tweeters, which are a rare inclusion for any speaker, let alone a wireless wonder. We spent a few days with this luxury speaker to see if its hi-fi chops could match its artistic design.

The Loop comes packed in an angled slab of styrofoam, sunken in a concave depression like a saucer sled ready to attack the slopes. Pulling the disk free of its black shroud revealed a solid hunk of molded plastic, wrapped with a tightly stretched coat of grey wool around the front side. A small white button bearing a Twitter-esque bird rests at the bottom of the speaker’s front face. The only other controls consist of two buttons along the back, one each with symbols for Wi-Fi and the speaker’s Playdirect function.

Along with the speaker, the box held a few accessories including a small crossbar stand that plugs into the back of the dish, a plastic wall mount and screws, an instruction packet, and a braided, cloth-covered power cable.

While the Loop may look like a one-of-a-kind design, there is a similar-looking device from Danish manufacturer Bang & Olufsen called the A9 that employs an eerily similar satellite dish form factor. What is it with these Scandinavians and their knack for melding retro artistry with hi-fi electronics, anyway? Still, the Loop pulls in its own audience thanks to its strangely attractive wool coat, which can be switched out for a multiplex of color choices to allow for color coordination, or a bit of peacocking in your listening room of choice.

Disrobing the speaker unveils a sexy configuration of drivers, including the aforementioned twin 1-inch ribbon tweeters at the sides, a 4-inch midrange cone driver at the center, and a 5-inch passive radiator at the top. The “2.1 system” is powered by a hefty 120 watt amplifier, and claims a 40Hz-20kHz frequency range, though we never heard the speaker reach that low mark with any convincing authority.

A small selection of ports resides on the back, including a power input, a 3.5mm aux input, a USB port for charging your smartphone and connecting to Wi-Fi, and a small cavity for the stand. At the top of the speaker’s back is a circular divot that allows for hanging the speaker on the included wall mount, and also doubles as an easy way to carry the unit around when switching up venues.

The multi-button at the front of the speaker controls power, onboard volume and mute, and also includes a pinpoint LED that displays status. Solid red means the speaker is sleeping, blinking yellow means it is booting up, solid white is what you see when the speaker is rocking tunes, and a collection of blinking white codes convey whether the speaker is at rest or ready for Wi-Fi play, or Playdirect connection. If the light blinks red, you’re in trouble; it means there’s a network issue.

While setting up wireless speakers via Wi-Fi is a bit more complicated than basic Bluetooth connection, it’s still pretty simple, provided everything goes to plan. We set up our iPhone 5 to connect over our Wi-Fi network by hardwiring into the USB port, pressing the Wi-Fi and Playdirect buttons on the back of the speaker simultaneously, and then choosing “Allow” under the “Share Wi-Fi” prompt on our phone. The system took a moment to boot up, and was soon ready to rock via Airplay.

The downside of using Playdirect is that your device will be offline.

If you don’t want to plug in, you can also connect to Wi-Fi via the free Libratone app, but the process is a bit more involved and requires first connecting to the Libratone over its autonomous wireless signal in the app’s Settings section, then guiding the speaker to your network from there. Android users must use the app for Wi-Fi connection.

For Playdirect, we simply followed the instructions by pressing the Playdirect button, waiting for the Libratone network to appear on our phone’s Wi-Fi settings and connecting from there. The downside of using Playdirect is that your phone is offline, meaning you won’t be able to access apps like Spotify or Pandora. The upside, of course, is that you can use the speaker anywhere there’s a power source. The speaker can also be connected to a Mac or PC over the latest version of iTunes, detailed in the manual.

The rare inclusion of ribbon tweeters suggests crystalline clarity in the Loop’s high frequencies, and that’s exactly what we heard. Treble information was precisely cast from the speaker, and complex synthetic effects, smooth violin ensembles, and the upper register of acoustic instruments were all silvery and buffed to a high gloss finish. However, on many tracks the treble was also severely bright and aggressive. That, paired with some potent bass, resulted in a weak and undefined midrange. The speaker didn’t deliver the kind of balance or accuracy across the frequency spectrum we expect from $500 worth of hi-fi audio. Many tracks were far icier and thin than we wanted them.

Sampling acoustic songs from John Denver to Nickel Creek and Bright Eyes, the Loop brought a good level of detail to vocals and the attack of the instruments, but there was extra sibilance in the consonances we didn’t care for, and we wished for a richer timbre in the strings. A few times, guitars were so light and tinny, they sounded like expensive ukuleles.

The same was true with other selections, from older recordings such as tunes from Bowie’s Ziggy Stardust age, to peppier hip-hop tracks, like Snoop Dogg’s “Serial Killa”. The Libratone app offers some small adjustments in the EQ, and we also got better results from moving the speaker closer to boundaries, but we constantly wished for a softer cut up top, and more from the midrange. The cymbals and snare were often too sharp, and midrange instruments didn’t put up the kind of definition or resonance we expected. More spread out rock tunes like hard-panned Beatles tracks also had trouble with instrumental separation in the lower regions of the sound.

We liked the speaker best on electronic tunes, such as Muse’s “Madness”, which offered a better balance and some impressive punch from the low end, though we had to be a little careful not to push the volume too hard for fear of some slight bass reflex rattle. The speaker pushed a lot of sound on those tunes, and even created some nice stereo movement in the treble for its dimensions, as the sound moved vividly across the basin between the dual tweeters.

While the speaker definitely had its moments, we were generally underwhelmed with the Loops sonic efforts. Part of our disappointment has to do with the lofty expectations we had, thanks to the promise inferred by the premium parts and price. The rest comes down a matter of personal taste; we just don’t care for speakers this bright.

The Liberatone Loop’s design makes it a pleasant aesthetic addition to the modern home, and will likely attract attention and discussion from visitors. Serving a background role, it will provide sufficient sound at a dinner party or social event. But at $500, the Loop’s sharp upper register, loose and flat midrange, and less-than-defined low end put it far from the kind of eloquent and balanced sound we expect in a hi-fi device. If you love the style, and a bright sound is your bag, you may enjoy the Loop, high price and all. But we’d rather take our money to Sonos, Bowers and Wilkins, or even Soundcast.

The best headphones for running in 2022
Best Samsung Galaxy Buds deals for October 2022
Best Prime Day Soundbar Deals: What to expect on October 11
Prime Day TV Deals: What to expect from the October sale
How to perform the AirPods Pro Ear Tip Fit Test
Best Amazon Echo Deals: Get an Echo Show for $40
How to check your AirPods battery level
Are Apple AirPods waterproof? Everything you need to know
The best cheap headphones and earbuds for 2022
Ar $25K, LG’s 97-inch G2 OLED is actually a bargain
The best horror movies based on true crimes
The best horror movies with killer kids
I desperately crave LG’s flexible OLED TV. Here’s why I won’t buy it