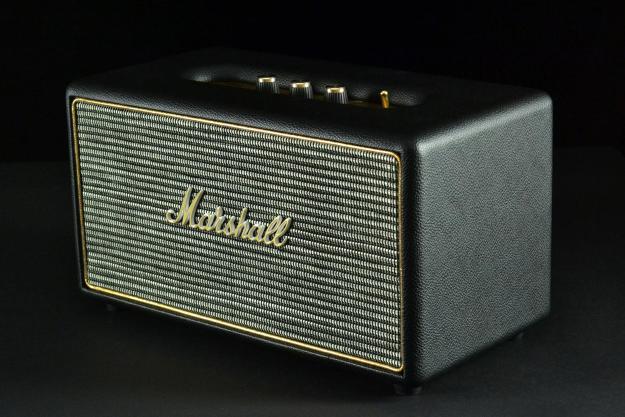 “Marshall’s Stanmore delivers satisfying sound in a package that is sure to turn heads.”

Generally speaking, consumer electronics marketing tactics bug the hell out of us. But Marshall Headphones, the consumer branch of Marshall’s audio division, does it so damn well that we can’t help but jump into audio-nerd mode whenever it releases a product. Much like its predecessor, the Hanwell, Marshall’s new Stanmore speaker (available at $400) is gussied up with such an enticing balance of opulent embellishment and Rock ‘n’ Roll nostalgia, it invokes the aura of a limited edition piece that begs you to snatch it up before it’s gone.

The speaker looks smaller in person than in its pictures.

When we brought home the Hanwell, we not only experienced exhilarating sound, but its design was so…well…Marshall-y, that every time we went to listen to it, it almost felt like we were plugging in our axe instead of our iPhone. Of course, the plugging in part was also our biggest gripe with the Hanwell, which lacked a wireless connection. No need to sweat that with the Stanmore, though. This miniaturized version atones for the sins of its brother, adding Bluetooth and an optical digital input to bridge its retro style with modern convenience. The only question the Stanmore had left to answer was whether it could blow away our ears as well as our eyes. A few days of rocking out solved the mystery, detailed below.

Unboxing the Stanmore was a lot like opening a birthday present, but without the fun of launching shredded wrapping paper across the floor. Beneath a plank of cardboard we discovered foam layer in which lay two grainy squares with the Marshall logo across the front in gold calligraphy – one a paperback instruction manual, the other a box containing the speaker’s power cable. In the center was a snaked length of black cable with gold 3.5mm tips and coils in the middle like a 70’s guitar cable.

Beneath the top level we found the speaker wrapped in a black shroud. Removing the heavy little cabinet – all 11 lbs. of it – our hands swept across a luxuriously thick layer of black vinyl which hugged the exterior like a fine leather jacket (the cab is also available with cream accents for some ebony and ivory-style variety).

Cut into the top of the speaker is a control panel of brushed brass with three smooth-motion gold knobs for volume, bass, and treble; a heavy gold power switch; and two beaded keys labeled Wake/Source and Pair. Four red LED bulbs line the left side to indicate source, including one for Bluetooth, Optical, Input 1, and Input 2.

A thick corrugated speaker screen stretches across the front of the cabinet, with a white Marshall logo at the center embossed in gold, and a translucent gold border lining the edges. The speaker looks smaller in person than in its pictures, reminding us a bit of the similarly-sized Supro amp we used to use in our studio days in Nashville, popularized by Jimmy Page back in the day.

More than just a pretty face, the Stanmore backs up its vintage aesthetic with a solid collection of available inputs and features. Aside from its Bluetooth connection, the speaker offers a 3.5mm input at the top, and both an RCA input and a digital Optical input at the back, allowing easy connection to a variety of sources and TVs. Also at the back are a bass port and a power saver switch. With the power saver switch engaged, the speaker must be awakened manually with a wake key if it lay inactive for 20 minutes or more; otherwise, it jumps back into action with a simple touch of your smartphone or other transmission device.

Underneath the speaker’s fabric screen sits the Stanmore’s trio of drivers, with twin ¾-inch dome tweeters flanking a 5 ½-inch woofer at the center. The system is powered by a class-D amplifier that pushes 80 watts, delivering 20 to each tweeter, and 40 to the center cone. The woofer handles all audio up to the 2500Hz crossover point before handing off to the tweeters, and Marshall claims a total frequency response for the system of 45Hz-22,000 kHz.

For its wireless connection, the Stanmore employs the latest Bluetooth 4.0 protocol with the aptX codec, allowing for full CD-quality streaming from aptX equipped sources. Tapping the ‘Pair’ key after setup pairs the speaker to your device almost instantly and it can remember up to six devices at a time, defaulting to the last device used upon startup.

After a satisfying click of the Stanmore’s thick, gold power switch and a quick pairing of our iPhone 5, we dove into a wide range of tracks from our collection. The star of the show for the majority of our listening was the lower midrange, handled by the speaker’s capable woofer. Bass lines in all genres, from Pearl Jam to Elton John, were smooth and pure, with a pleasantly firm posture. And journeys into the deep realm of the lower frequencies offered some swells of powerful force that warmed the room with a musical hum.

The Stanmore was at its best running through acoustic and pop tracks where its aptitude for balance and clarity were on display.

The upper register was clean and delicate, raining down from above like a thin mist. The speaker handled vocals with crystal clear presence, and stringed instruments had sharp, brisk attacks, though we often found ourselves wishing for more body in the meat of the sound. As we mentioned earlier, the Stanmore is quite small in stature, and at times, it sounded like it.

Snare drums on some of the more rocking tunes were a shade pale and papery during the sustain. The same could be said for piano and cymbals which had a tendency to come off a little boxy, with less depth than we’d hoped for. Electric guitar from tracks like Bowie’s “Star” and “Oh Darling” by the Beatles sounded relatively accurate, but they didn’t have as much texture as we expect from a speaker at this price, and never ripped open with the overdriven scream the cabinet’s sexy exterior tacitly promises.

The Stanmore was at its best running through acoustic and pop tracks where its aptitude for balance and clarity were on display. Radiohead’s “Codex”, one of our go-to test tracks, was a great example of the speaker’s crystal clear highs. While the main thump in the groove was flatter than it should’ve been, the vocals were clean and forward, and the French horns entered with a glistening expanse that was extremely serene. “Out of the Woods” by Nickel Creek was another satisfying experience, blending firm and balanced stand-up bass with smoothly blended vocal harmonies, and an achingly clear ring to the acoustic guitar and fiddle.

While Marshall’s new Stanmore offers gorgeous bass lines, and clear distortion-free treble, the speaker came up a little shy of the performance we’ve come to expect from a $400 speaker in what has become an exceedingly competitive wireless speaker space. We wished for more rock and less pop in general, and felt that instrumental definition wasn’t fully exposed. That said, you can always expect to pay a premium for brilliant design, and we can’t think of a speaker we’ve auditioned that looked more like rock ‘n’ roll than the Stanmore. If you’re willing to spend a little more for a speaker that is unequivocally cool, Marshall’s Stanmore delivers satisfying sound in a package that is sure to turn heads.