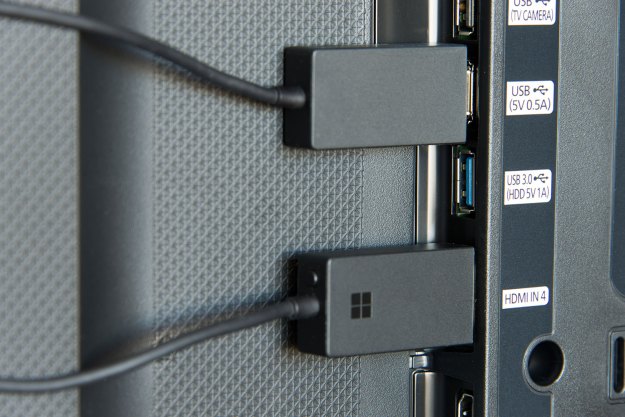 “This little adapter works well with Windows, but its pricey for what it does.”

We’ve all watched YouTube videos on a laptop while the TV sat unused across the room. The TV is bigger, and looks better, but connecting to it sometimes just isn’t worth the hassle. There are a lot of devices designed to solve exactly that problem. Google’s $35 Chromecast works if you’re deep into Google’s ecosystem, and Apple’s $150 TV box is the tool of choice for Apple fans. Our Microsoft Wireless Display Adapter review could hold the answer for Windows loyalists.

Microsoft hopes it’s the $50 Wireless Display Adapter. Unlike the Chromecast and the Apple TV, this isn’t a device with an app ecosystem: it’s simply a way to wirelessly turn your TV or HDMI-compatible display into an external monitor. It does this using the 1080p Miracast protocol, support for which is baked into recent versions of Windows and Android.

But is a wireless HDMI cable a good alternative for the Chromecasts and Apple TVs of the world, or is it too complex for most users to worry over?

Two plugs connected by a wire

Looking at the Wireless Display Adapter, you might think it’s some sort of USB to HDMI cable, instead of a wireless adapter. But there’s a full Wi-Fi card and antenna hidden in those dongles, and that’s what you’ll use to connect your laptop or phone.

The USB plug is only for power, while the HDMI plugs into your display. The two dongles are connected by an 11.5 inch wire, which should be long enough to connect to a USB port on the back of the display. If you need just a little bit more length, the included 6 inch extension cable should help a little bit, but something longer would have been better. If there’s no USB port on your TV, you’ll need something else to plug into. The Adapter does not come with its own power supply.

For travel, both sides of the adapter plug into a handy plastic insert. This should let you take this Adapter on the road without getting tangled up with your phone charger and headphones.

There’s no on or off switch. To start it the Adapter, just plug it in. On your display you’ll see the Microsoft logo during boot, until eventually you’ll see a screen with instructions for connecting your device to a Windows phone or PC.

Perfect for photos and videos, useless for gaming

We tested the Wireless Display Adapter with two devices, a Lenovo laptop running Windows 10, and a Moto X running Android 5.1.

We found video playback to be smooth, and audio synced up without problems.

Connecting with a Windows 10 device couldn’t be quicker. Open the Action Center, click “Connect”, and you should see the display listed as an option. By default your display will be mirrored at a maximum resolution of 1080p (1920×1080 pixels), but on Windows 10 devices you can also choose to extend your display so different windows show up on your TV and your laptop. Audio will also be sent to the display, which is great for watching movies.

At first glance the picture looks great, almost as though you’re using a standard HDMI cable. We could imagine using this for showing off PowerPoint presentations or photos without any problem. Pulling up the latest highlights from NHL.com, we found video playback to be smooth, and audio synced up without problems. However, the higher the quality of the video, the more likely you are to run into problems. We noticed significant latency issues when watching videos which ran at 60 frames per second, instead of the usual 25 or 30. The Wireless Display Adapter just can’t handle all those extra frames, and ended up turning any 60 FPS video into a garbled mess.

Additionally, we can’t recommend this technology for is gaming. Full screen games like Torchlight II didn’t even show up on the display, and even while simply browsing the web there was a great deal of lag between moving your mouse and seeing the cursor move on the big screen. The delay made simple games like Tetris hard to play.

Connecting with an Android device was also straight-forward. On most devices, the “Cast screen” icon found in the drag-down menu is all you need. Connecting was fast, and again we could see this as a great way to show off photos. There were framerate issues not witnessed with Windows, however. Videos on the TV sometimes looked choppy compared to the phone itself, though for the most part were perfectly watchable.

Gaming, again, was out of the question. The delay made a game like Duet completely unplayable. Occasionally, the display would glitch out entirely while trying to play, likely due to the frame rate issue again.

Microsoft advertises the Wireless Display Adapter as having a 23-foot range, which we found to be conservative.

Results will naturally vary by environment and depending on what device you’re connecting with, but we found walking 30 or even 50 feet away from the adapter didn’t stop the signal. Avideo kept playing on my TV with my laptop sitting in the driver’s seat of my car, 40 feet away and one story down from my television.

You shouldn’t buy this device planning around a use case like this, but the fact that I could pull it off makes me think connectivity won’t be much of an issue for most people.

Supports Windows 8 and 10, Android 4.2 and later, and absolutely nothing from Apple

The Wireless Display Adapter is based on the open Miracast protocol, which uses Wi-Fi to stream 1080p video. Microsoft added support for this protocol to Windows 8, and added even tighter integration to Windows 10. Windows Phone devices also support the protocol.

Google supports Miracast in recent versions of Android, meaning if you’ve got a device running Android 4.2 or later it will also work with your phone. Google’s ChromeOS, meanwhile, does not support the protocol. Linux doesn’t support it out-of-the-box either, but users have created a variety of hacks that supports the protocol.

Connecting with a Windows 10 device couldn’t be quicker.

Notably absent from the list of compatible operating systems is Windows 7. Those users might not be completely out of luck, however: third party tools like Intel’s WiDi support the Miracast standard, and might be able to hook up your Windows 7 device.

But what will not work, under any circumstances, is anything created by Apple. Macs, iPhones, and iPads do not support Miracast, meaning if you own one of those devices you’ll need an Airplay compatible device to wirelessly share your display.

Configured with software from the Windows Store

No third party software is necessary to connect to the Adapter, but to configure and update the firmware requires the free Microsoft Wireless Display Adapter app from the Windows Store. This simple software allows you to set a password for the Adapter, change the display name, adjust overscan, and update the firmware. Just connect to your display wirelessly, then open the app, and you can configure it.

Warranty lasts for one year

Microsoft offers a limited 1 year hardware warranty for the Wireless Display Adapter, which is standard for most devices at this point.

If all you want is to turn your TV or other display into something you can connect to wirelessly for quickly showing off photos or videos, Microsoft’s Wireless Display Adapter is a good buy. For $50 is provides an easy way to project Windows and Android screens’ to a TV, and with Windows 10, even extends your desktop.

But if you’re hoping for something more functional than what’s offered by an HDMI cable, you’re out of luck. And if you were hoping to do some big-screen gaming from your laptop or phone, you need to look elsewhere.

The biggest problem might be the price point. $50 isn’t unreasonable, but the Amazon Fire Stick only costs $40, comes with a remote, a library of content you can stream without your TV, and can be used as a Miracast receiver just like the Wireless Display Adapter. Google’s $35 Chromecast offers similar functionality at an even lower price point. If you’re mostly interested in streaming video, these are both better options.

But neither of those devices can match the Wireless Display Adpater for functionality, as it can turn your television into a second PC screen. If you want a simple way to occasionally show off your photos, watch YouTube videos, or edit PowerPoint on a big screen, the Wireless Display Adapter will be worth the slightly higher price tag. But, if you’re turned off by the latency issues, you have plenty of options available — be sure to check out our breakdown of the best plug-and-play streaming devices.