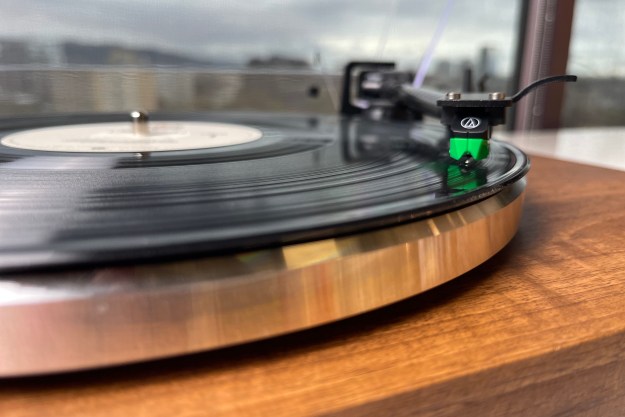 “If there's a better turntable for the price than Monoprice's Monolith, we haven't seen it yet.”

The entry-level turntable market is almost an embarrassment of riches. Our list of the best turntables you can buy features several outstanding low-priced models to choose from, and those are just part of a massive offering from multiple brands. But the one thing too many entry-level turntables get wrong is an upgrade path. That’s why I think the Monoprice Monolith Turntable is such a smart choice. It offers a solid foundation to get you hooked, and an easy upgrade path to feed what will likely become a long-term vinyl addiction.

I spun the Monolith turntable for months to figure out if it will get new owners into the groove at the drop, or have them skip the whole idea of vinyl playback entirely. In the end, even though it requires a little more hands-on effort out of the box than I’d like, I think the Monolith Turntable is one of the best starter pieces you can buy. Here’s why.

When choosing a Monolith turntable, you have two decisions to make — the first comes down to aesthetic preference, but the second is a bit more critical.

The Monolith Turntable comes in two finishes: gloss black and walnut. While I haven’t experienced the gloss black option myself, the quality of the walnut finish on the sample I received is surprisingly impressive given the turntable’s cost. While I still love the somewhat utilitarian look of my daily-driver Audio-Technica AT-LP120-USB, there’s no doubt that the Monolith Turntable outclasses it in the looks department.

From there, you can choose to have the turntable delivered with one of two cartridges preinstalled: The version with the ubiquitous Audio-Technica AT-3600L runs $200 (out of stock at time of publishing), while the version with the venerated Audio-Technica AT-VM95E costs $250. Considering that the AT-VM95E is considered one of the best cartridges you can buy for under $100, I consider the second turntable option well worth the premium. Not only does it sound pretty great, but you can easily switch out its stylus.

Of course, if you or the one you purchase the table for is likely to suffer rapid-onset upgrade-itus, it may be smarter to get the less expensive option and save that $50 for purchasing a better cartridge down the road.

When your Monolith Turntable arrives, you’ll have a bit of unpacking, parsing of parts, manual reading, assembly, and set up to perform. I found most of this process fun. I mean, a big part of enjoying vinyl is the whole physical/tactile involvement experience, right?

What I did not find fun was the experience of decoding the instruction manual. Figuring out how to liberate the preinstalled belt so it would spin the platter was no big deal. Determining that the tonearm’s counterweight was installed backward and needed to be removed and then reinstalled seemed a bit odd, though I got through it with minimal hassle. But the anti-skate weight? That whole thread-the-fishing-line-through-the-tiny-holes bit was downright frustrating considering the instructions didn’t make the process clear to me at all. But if you can make it through that one step (and you can, I have faith in you), you will soon be rewarded.

A couple of design features worth mentioning: The Monolith Turntable uses an outboard power supply, which I think is great for noise reduction, but the wall wart is sizeable and isn’t likely to fit into that last available outlet on an already crowded power strip, so be prepared by clearing outlet space before you need to plug into power, lest your immersion in vinyl bliss be perturbingly delayed. Also, the Monolith Turntable comes with a felt mat, which is common, but not the best choice. It will get you by, but one easy upgrade would be to replace it with this inexpensive cork platter mat.

And so long as we’re talking about accessories here, I’ll add that one conspicuously missing from the box is a set of RCA analog audio cables. Perhaps you have a set already sitting in that rat’s nest box o’ cables you refuse to recycle, but if not, be sure to purchase a set if you’ll be connecting the turntable to an integrated amp, stereo receiver, A/V receiver, or an affordable outboard phono preamp. If you’re planning on ripping your vinyl to digital, though, the requisite USB cable is in the box. Another accessory worth having around is a stroboscopic disc for checking a turntable’s speed. I mention this because if the belt on this turntable isn’t in just the perfect position, the speed will be off. You’ll hear something’s not right when you play a record (probably), but knowing you’ve got the perfect 33 1/3 RPM is great for peace of mind.

As vinyl’s resurgence has taken place in the digital age, turntables have advanced beyond the simple mechanical tools they once were. The Monolith Turntable has everything you need for the modern age of vinyl playback. That includes a passable built-in phono preamp so the turntable can be connected directly to a stereo amplifier, even if it doesn’t have a Phono input. If it does, though, a switch on the back of the Monolith Turntable allows you to move to a phono output from line output. Also on the back of the table is a USB output for connecting to a PC so you can rip audio, or to the USB digital input on a set of powered speakers. If you’re looking for Bluetooth output, however, you won’t find it here. And that’s just fine by me.

The Monolith Turntable’s controls are simple. You get a two-speed selector dial on the left side of the table, and an on/off switch on the right. The real star of the show, though, is the carbon-fiber tonearm — an inclusion that is virtually unheard of at this price point. A removable headshell allows for easy cartridge upgrades.

I’ll break down this section into three parts, covering the performance of the built-in phono pre-amp, the digital audio output, and the turntable mechanics separately.

The phono preamp is second only to the cartridge in terms of how much effect a part can have on the sound quality of a vinyl listening rig. Sure, the tonearm plays an important role as well, but the incredible fidelity a great tonearm with a great cartridge can provide will be obliterated by a poor phono preamp. I’d characterize the phono preamp built into the Monolith Turntable as passable. It doesn’t sound bad, but it isn’t going to unlock deity-like levels of audio bliss, either. It does its job well enough for a turntable at this price point. Come to think of it, I’m not sure I’ve heard much better from a built-in phono preamp. Even the one built into my Audio Technica AT-LP120-USB is only marginally better.

All I wanted was a glitch-free experience, and that’s exactly what the Monolith Turntable’s USB output gave me. Using a variety of digital-to-analog converters (DACs), I was able to connect the turntable to a pair of KEF LS50 Wireless II speakers and achieved excellent results. Of course, had KEF decided to leave a USB input in the LS50 Wireless II rather than remove it from their predecessor, the LS50 Wireless, I wouldn’t have had to involve an outboard DAC at all. But I digress.

I think the best-sounding tonearm is one that doesn’t sound like anything at all. A great tonearm shouldn’t bring any sound coloration to the table, it should just be easy to use and a pleasure to interact with. The Monolith Turntable’s tonearm succeeds splendidly in both regards.

This let the Audio Technica AT-VM95E shine through as the rock-solid cartridge it is. Bass was tuneful and reasonably taut, mids had plenty of space and air, even if they weren’t entirely pure and translucent, and treble frequencies had just the right amount of articulation, ring, and shimmer.

The Monolith Turntable was a simple pleasure to use. What it lacks in ease of set up, it makes up for in long-term ease of use. And it looks great doing it, too.

Most importantly, though, the Monolith Turntable is a solid foundation to build on. It’s ready to receive much fancier cartridges and high-end platter mats, and will happily play with any number of outboard phono preamps or high-end integrated amplifiers.

Is there a better choice?

Its only real competition would have to be the Fluance RT81, which, to be perfectly frank, is on par with the Monolith Turntable in just about every way — you just get different finish options. There’s also the House of Marley Stir it Up, which doesn’t have nearly as nice a tonearm, though it is made of sustainable materials, and of course, the very popular U-Turn Orbit Basic turntable, which doesn’t have as nice a tonearm, and lacks the premium finish seen on the Monolith Turntable.