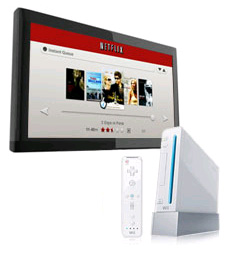 Nintendo’s Wii is no longer just a platform for swatting virtual tennis balls and leaping around in front of your TV. On Thursday, Netflix shipped out discs that will turn Internet-connected Wiis into streaming movie machines, just like the competing Xbox 360 and PlayStation 3.

A post on the Netflix blog alerted Wii owners that discs were on their way to those who preordered them earlier this year. Netflix won’t call it an official launch: Initially, the company will only ship them to a limited number of customers to collect feedback.

Netflix pulled the same routine with the PlayStation 3 rollout, and launched officially just five days after its initial testing period. Wii owners who want to get on the queue for the next batch of discs can enter their e-mails addresses at Netflix’s Wii launch page.

Just as on the Xbox 360 and PlayStation 3, access to Netflix streaming on the Wii is free with a Netflix subscription costing $8.99 a month or more.