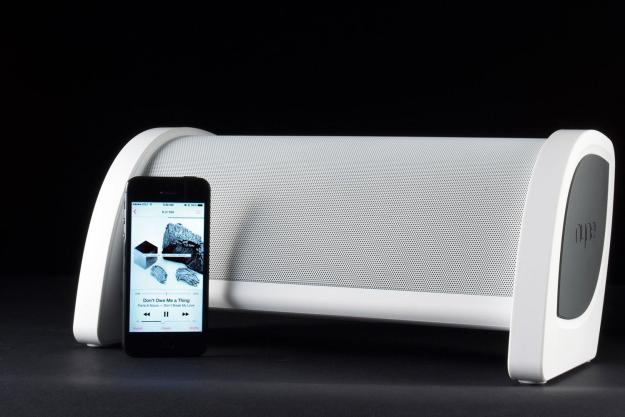 “If you’re looking for full sound, portable convenience, and a bit of port whistle won’t ruin your day, the Bass offers reams of value for the price.”

With options multiplying faster than a box of rabbits hopped up on fertility drugs, one might think there is simply no room left for another portable Bluetooth speaker. But Nyne isn’t listening to naysayers when it comes to the market’s swelling saturation point. The company recently dropped a brand new lineup of affordable speakers that encompass just about every niche a portable music enthusiast could want.

At the head of Nyne’s new family is its guilelessly-titled Bass speaker, which blends the stature and design of a homebound wireless speaker with 10 hours of battery runtime, and uber-efficient Bluetooth 4.0 streaming. But the Bass’s most potent weapon in the war for your Bluetooth dollars might just be its price point, coming in at a meager $150. Competing with similar speakers that cost twice that or more, the Bass has a leg up from inception. But can it deliver a worthwhile performance for such a small chunk of change? We recently set the Bass loose to find out.

Pulling the Bass from its protective shroud revealed a gleaming white pod in the shape of an ‘S’, resting between sturdy stands on soft rubber grips. The rubberized plastic coating along the exterior conveyed a plush aesthetic as we ran our fingers along the speaker’s outer shell, breaking at a wide metal speaker screen that covers the entire front face.

The Bass immediately appeared to match up well with more premium wireless speakers we’ve encountered, save for the heavy plastic buttons along its top control panel, which have a vibe that’s a little more Mattel than Sharper Image.

Inside the box we discovered a red Aux input cable with gold plated extensions, a charging cable with interchangeable global adaptors, and a map-like packet of folded instructions.

We’ve seen a lot of speakers come and go through our offices over the years, but the Bass stands as one of the more unique when it comes to physical design. Its elegant curves and upward-angled front face look pretty sharp on the shelf, and the speaker definitely gives an impression of a device that costs well above its price point. Yet there’s the hint of an appliance essence radiating from its rounded frame, as if it’s the result of a wild night of passion between a hi-fi speaker and a toaster oven.

The speaker definitely gives an impression of a device that costs well above its price point.

At the Bass’s succinct backside is a small panel that hosts the inputs, including an Aux input, the power adapter port, and a USB port for charging a mobile device, as well as the master power switch, and an LED battery indicator. Carved out of the cabinet above the panel is a small handle for toting all 6.5 pounds of the speaker around with one hand, making for a convenient way to bring it along for the ride. The speaker stretches 13.5-inches wide, 7-inches deep, and 6.25-inches high – just small enough to make it a light burden to bear. Color selection apart from our white and grey review model includes a black version with white accents.

While we aren’t crazy about the style of the gaudy buttons along the top, they do make it easy to navigate onboard commands, allowing us to control volume, power, song search, and play/pause. The speaker also allows for fielding phone calls via its built-in speaker phone, and it supplies access to voice-command calling from your smartphone’s interface with a double click.

As mentioned, the speaker employs the latest Bluetooth 4.0 protocol, which likely accounts for its impressive 10 hour run time, and also allows for crystal clear wireless streaming that competes with Airplay and DLNA streaming when properly employed. An NFC pairing point is indicated on the grey emblem along the speaker’s left stand, allowing for easy one-touch pairing with compatible devices. For those without NFC, the speaker jumps into pairing mode upon startup, requiring only selection of the device in your smartphone’s Bluetooth settings.

Beneath the Bass’s robust front speaker screen rests a pair of 2.8-inch drivers each pushed by 10 watts of power, along with a 1 x 4-inch “subwoofer” with a 15-watt power allotment.

With a name like Bass, you’d think it would be pretty obvious which aspect of this speaker’s sound will make the biggest impression out of the box, right? Wrong. From the very start of our evaluation, the sonic aspect that popped out at us most overtly was the almost incessantly clear and vivid upper register that rolls out of this little white bulb. The treble seemed to cascade from the Bass (that feels so counterintuitive to say) with a light and airy touch that is on the verge of the kind of clarity you’ll hear from expensive Airplay competitors, such as the Wren V5AP.

We can’t remember the last time we’ve heard better presence from a speaker this inexpensive.

That crystalline transparency allowed the speakers to do some nice things with our favorite acoustic tracks, rendering the tight and sparkling guitar strings of works from Ray Lamontagne and Nickel Creek with lightning-fast transient reproduction, floating along an extremely clean wireless connection. However, as we continued to dig into our catalog, that airy sound started to become almost too much, as if the top tones were hissing at us. To borrow a Family Guy phrase, the clarity of the upper register “insists upon itself,” leaving very little room for resonance or the fleshing out of the richer instrumental overtones.

The treble also tended to dominate the upper midrange. We expected snare snaps and even electric guitar tracks to be a little taught, but the bright flavor worked its way too far down the line, lending a light and brittle touch to heavier moments like tom rolls, which normally would have been thick and ruddy. Sarah Watkins’ violin lines were especially ice-y, and we found ourselves wishing for a thaw in the midrange that might open up the sound.

However, most of our critical points were made under the impression that the Bass cost somewhere around the $300 line. With such a powerful, clean sound, we had no indication the Bass might run half that. The speaker really does play above its price point, and we can’t remember the last time we’ve heard better presence from a speaker this inexpensive. In fact, all things considered, the only major issue we had with the Bass was, ironically, the bass. Well, more to the point, the bass port.

The lower register itself was warm and lyrical, with a lot more oomph than we expected. Bass lines especially had a smooth radiance that provided a nice foundation for the overall sound signature. Even when we pushed the speaker hard with songs like “Royals” and “Hypnotize,” the low end held up well with negligible distortion. Unfortunately, it was songs like those that spawned an annoying whistling sound from the tiny port at the back of the speaker. The sound was fairly well camouflaged when the midrange got cooking, but it was there whenever major grooves made their presence known, and something that could be a deal breaker for listeners who rock a lot of bass-heavy tunes.

If it weren’t for the issue with the Bass’ bass port during songs with heavy grooves, Nyne’s new speaker would be a no-brainer. Sure, the treble is a little tight, and the midrange could be warmer, but for $150, you just don’t hear this kind of sonic performance from a speaker that’s also rated to last for 10 hours on the road. As it stands, we’re a little on the fence. But if you’re looking for big sound, portable convenience, and a bit of port whistle won’t ruin your day, the Bass offers reams of value for the price.