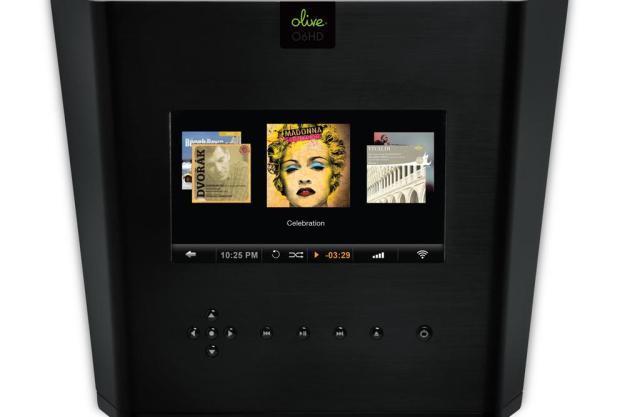 “Olive is confidently transparent about the components that make up the 06HD—they’re not pulling the wool over anyone’s eyes by claiming to use mystery materials with magical properties.”

One of the few criticisms we lodged against Olive’s previous music server, the 04HD, was that a PC could be customized to deliver most of the same features and performance at much less cost. A PC would be bulkier, noisier, and not nearly as attractive, but it would be cheaper. It would be much harder, however, to build a PC to compete with Olive’s latest server, the model 06HD.

Audiophiles are often criticized for having more money than sense. They’ll spend hundreds of dollars for cryogenically treated audio cables (sorry, I meant to say “interconnects”). They’ll replace perfectly serviceable power cords with pricey cables festooned with ferrite cores, capacitors, chokes, and other materials that the manufacturer claims will dramatically improve the performance of whatever device the cord is connected to. And they’ll spend tens of thousands of dollars on high-end preamps, amps, CD players, outboard DACs, turntables, speakers, and other components. Olive clearly has its eye on these well-heeled customers—the Olive 06HD is priced at a cool $5,000—but there’s not a drop of snake oil in this product.

Olive is confidently transparent about the components that make up the 06HD—the company’s not pulling the wool over anyone’s eyes by claiming to use mystery materials with magical properties. In fact, Olive identifies the make and model of nearly every component save one: the CPU responsible for running the Linux-based operating system (reps were willing to reveal that it’s a custom chip manufactured by Marvell).

Before we dive into an examination of the 06HD’s innards, let’s examine its gorgeous exterior. It’s slightly larger than the 04HD, with 10.1-inch, 800 x 480-pixel color touch-screen occupying most of the real estate on top of its all-aluminum shell. You can use the screen (or the buttons below it) to navigate Olive’s graphical user interface; alternatively, you can use a smartphone or tablet (there are apps for both the iOS and Android operating systems). While you’re listening to music, the display shows album art and metadata related to the music you’re currently listening to. An HDMI output in back enables you to display the same on your TV or video projector (although the resolution is limited to a pedestrian 480p).

Neither the 04HD or the 06HD would work well tucked inside the typical entertainment center; on the other hand, they’re so beautiful to behold that you wouldn’t want to hide them in a cabinet. The narrow front panel hosts a ¼-inch headphone jack with its own volume control, and a slot-feed CD player and burner. We’ll go into more detail about these components later.

Turn the 06HD around and you’ll find a number of upgrades compared to the 04HD, chief among them balanced XLR analog and digital (AES/EBU) audio outputs fabricated by the famed European audio-component manufacturer Neutrik. Balanced connectors such as these are much less susceptible to external noise and electromagnetic interference, and they support much longer cable runs than is possible with RCA and other types of unbalanced audio cables. Olive also provides gold-plated RCA analog audio outputs, if your amp isn’t equipped with XLR inputs, as well as coaxial and Toslink S/PDIF connections if you’d prefer to connect the server to an outboard digital-to-analog converter (DAC). The 06HD doesn’t have any digital inputs, however, so you won’t be able to use it to convert the digital outputs from other devices.

The back panel also hosts mounts for a pair of Wi-Fi antennas, a gigabit Ethernet port, and a USB 2.0 port (which is limited to backing up the internal 2TB hard drive and updating system software; you can’t connect a keyboard to it for data entry purposes). Backups are image-based and will overwrite the contents of whatever external drive is used for the backup; the upside to this is that restoring your music library after a catastrophic drive failure will be quick and painless. You’ll need to use the network connections to transfer your music library to the server.

Olive’s engineers put three high-end DACs inside the 06HD: Texas Instruments’ Burr-Brown PCM1792s, with 24-bit resolution and a sampling rate of 192kHz. Two operate in mono (one DAC for the left channel and one for the right); the third operates in stereo, feeding the server’s onboard headphone amp. To reduce jitter (deviations in time that can result in the spatial distortion of voices and instruments), the 06HD uses a TI SRC4194 asynchronous sample-rate converter to upsample the signal to 24-bit resolution and 384kHz sampling rate before converting it to analog.

Power for the analog and digital components come from separate linear power supplies, with a high-performance AC line filter and a custom-built toroidal transformer (the benefit of this type of transformer is that it radiates a much smaller magnetic field than a non-toroid transformer). Each of these component choices contributes to the astounding audio-performance specs Olive claims for the 06HD: total harmonic distortion plus noise (THD+N) of 0.0007 percent, a signal-to-noise ratio of 124dB, and dynamic range of 121dB.

The 06HD comes with a 2TB hard drive that’s wrapped in eight layers of padding, so that absolutely no noise or vibration escapes from the enclosure. The TEAC CD player/burner is equally quiet, even when ripping or burning a disc. Slip a disc (CDs only, SACDs and DVD-Audio discs are not recognized) into this drive, and the 06HD can automatically rip it, transcode the tracks to your format of choice, store it on the hard drive, and download the album art and metadata from Olive’s own archive. If your find the metadata to be incomplete or unsatisfactory, you can edit it using your networked Mac or PC through Olive’s Maestro Web interface, which runs on the server. You can also transfer your music library from a Mac or PC to the 06HD over your network.

In addition to its wireless networking capabilities, the 06HD is also outfitted with a gigabit Ethernet interface. It can stream music from other UPnP and DLNA servers (Olive supports TVersity and Twonky Media), and it can stream music to other network clients, including Olive’s own 02M multi-room player (each server can support up to 15 of these devices). Finally, you can connect to just about any Internet radio station. What you won’t find, however, are any Internet radio streaming services — such as Pandora, LastFM, or Slacker — on any of Olive’s music servers.

We connected the 06HD to an Onkyo M-282 two-channel amplifier driving a pair of Klipsch RF-35 tower speakers to evaluate its musical chops. We selected a diverse collection of music, starting with the Eric Whitacre album Water Night. This this version, encoded in 24-bit FLAC at a sampling rate of 96kHz, came from the Bowers & Wilkins Society of Sound subscription music service. This album includes several a cappella tracks featuring the Eric Whitacre Singers, including “Her Sacred Spirit Soars.” Music such as this, consisting solely of human voices, provides nothing in which audio components can hide their flaws, and the 06HD handled the track beautifully, presenting each voice with vivid clarity.

We used another album from the Society of Sound collection, Dub Me Tender, from Dub Collossus, to evaluate the server’s bass performance (encoded in 24-bit FLAC at sampling rate of 44.1kHz). This groundbreaking fusion act blends traditional Ethiopian music with elements of jazz and dub reggae to produce a sound uniquely their own. “Crazy in Dub” has a driving bass line, which the 06HD presented with aplomb without muting the sizzle of the kabbas (a handheld percussion instrument consisting of a collection of metal beads that the player rubs around a corrugated metal cylinder).

Returning to classical music, we next cued up the London Symphony Orchestra’s recording of Britten’s Ware Requiem, encoded in 24-bit FLAC at a 48kHz sampling rate. The 06HD sounded glorious, presenting each instrument—strings, brass, and choir—with the utmost clarity and precision.

As we said at the opening, it would be difficult to build a personal computer that could replicate the Olive 06HD’s performance, but that might soon be a moot point. With the proliferation of smartphones, tablets, and inexpensive digital media streamers, many people are choosing to forgo owning any PC at all.

The 06HD is a spectacular, no-compromises digital music server suitable not only for audiophiles, but anyone with a deep-seated passion for music (and deep pockets with which to indulge that passion). There is no easier way to rip a CD, and collectors will appreciate Olive’s Maestro software, which offers unparalleled tools for producing detailed metadata. Yes, the 06HD is expensive, but not without reason: Olive not only uses top-shelf components and houses them in one of the most elegant enclosures we’ve seen, but each system is hand built in the U.S.