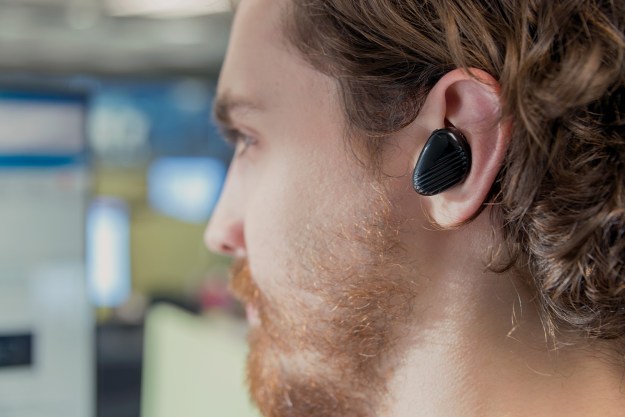 “Optoma's BE Free8 cuts all the cords without breaking the bank.”

True wireless earbuds aren’t all created equal, and they definitely don’t all come in at the same price point. The Optoma NuForce BE Free8 maneuver themselves in the mid-range on performance and price in this review, presenting themselves as an alternative to more expensive competitors.

Getting to a lower $150 cost meant cutting out any special features geared toward fitness, on board controls, or enhanced hearing, and focusing instead on audio performance. As our review reveals, it’s a trade-off that comes with some caveats.

The earbuds come nestled in foam inside the box, with the charging case set just below. Optoma included four pairs of ear gels, with small, medium and large sizes for the regular ones, plus an extra small size that comes in its own bag. A short, flat Micro USB charging cable rides along with all the gels. A basic user manual visualizes simple and easy setup and functionality with illustrations to spell it out without using words.

Given there are no Comply Foam tips inside, that might be something you want to consider for a tighter seal or malleable fit compared to gels, though the earbuds generally stay in well with the silicone tips.

Optoma hasn’t created a pair of true wireless earbuds previously, so the BE Free8 are something of an experiment. A pedigree may be lacking for this specific headphone sub-category, but the company applied its experience with its own sport and wireless earbuds to this cord-free pair.

The IPX5 rating offers some water, dust, and sweat resistance.

The Free8’s feathery weight (1.6 ounces) is partly because of the cheaper plastic used to mold them. Coating the outer portion with a piano black gloss gives the earbuds a sleek veneer, but that doesn’t make them any more premium on fit and finish.

The inner portion is matte, with the drivers angled close to 90-degrees, to nestle into the ear canal for a tight seal. While the piano gloss gives the buds a bit of flash, they’re relatively small compared to many competitors, and a fair bit less conspicuous than Apple’s AirPods.

Each earpiece has a single button. The left powers on and off, though holding down the button on the right is also necessary to turn that one on and off, too (though it does nothing else). Holding the left for four seconds puts them into pairing mode. Pressing it once can play or pause audio, while a double-click skips forward a track (there’s no way to repeat). Wearers can also answer or end calls with a single press. Holding it for two seconds can trigger digital assistants, like Siri and Google Assistant. We wish there was a volume control, however, and the tiny, everything button can be pretty difficult to locate with your fingers with the buds inserted.

Both aptX and AAC codecs are supported, covering the main Bluetooth audio streaming standards. The IPX5 rating does offer some water, dust, and sweat resistance, but the earbuds likely won’t hold up long if you dunk them.

The slick charging case, which is quite obviously modeled after Apple’s AirPods case, has the same piano black finish all around, and a lid that can be a bit tricky to open at first. The case carries three additional charges for the earbuds, and a trio of LEDs at the bottom tell you how many charges are left, while an LED up top lets you know the earbuds are charging. Optoma rates the BE Free8 at four hours of listening per charge, which is relative depending on volume level. The larger size gels did require us squeezing the earbuds into their charging slots, but at least we didn’t have to force it too much.

We hit 3.5 hours consistently at about 75-85 percent volume, which isn’t fantastic, but it’s also not bad considering the price. Without ancillary features like a heart rate monitor, activity tracking, hearing enhancements, or extra navigation controls, we would have liked to see a bit more battery life. Jabra’s fully wireless Elite Sport Plus, for instance, give you fitness features like heart-rate tracking and longer battery life for around $50 more.

The lack of volume control (for music or calls) means you’ll have to take your phone out more than we’d like, and not being able to repeat a track was another nuisance. The existing controls actually do more than what the AirPods have, so the effect may be subjective. Apple’s AirPods also feature sensors that pause music when you pull them out of your ears, though, whereas the Free8 must be powered down manually by holding each button for two seconds, so in either case you’re giving something up.

A voice prompt confirms when the earbuds are on, or pairing upon startup, piping up again when the battery is low.

Optoma went with relatively small 6mm drivers for the BE Free8, one of the trade-offs of getting this form factor at a lower price. That said, audio performance is impressive for the money, offering smooth and consistent sound across genres.

As we expected, the sound signature is a pleasant one that follows a safe middle road, refraining from favoring any side of the audio spectrum over another. Highs and mids are warm, yet not especially resonant. But unlike a lot of fully wireless buds we audition, there’s enough spatial separation here to appreciate more complex recordings. For example, Pink Floyd’s Another Brick in the Wall comes through clearly, and well detailed. We noticed a similar experience with November Rain by Guns’n’Roses.

Bass is exactly as we thought it would be: Punchy, neutral, and with enough depth to satisfy most casual listeners. We suspect serious bass lovers will either like it or grudgingly accept it.

One issue we’ll raise is that the Free8 put out a fair amount of Bluetooth noise. It’s something you’ll hear each time they connect to your music app when music isn’t playing, but it all but dies away once you get the tunes cranking.

As usual with earbuds, the key to getting the best out of the audio performance is finding the best possible seal for passive noise isolation. We tried the different size gels Optoma included and found the largest to be the best for our ears. We also found success with separately sold Comply Foam tips, whose malleable density contours a little better in the canal. The downside is that they don’t last very long when sweat seeps in.

In the gym or on the street, the noise isolation feels natural.

With a tight fit secured, we appreciated the way the BE Free8 treat every genre we listened to with good balance, showing some real versatility. We played through Lalah Hathaway’s Live! album and found her vocals warm and resonant. Ed Sheeran’s Shape of You was a little flat, but otherwise clear and clean. Diana Krall’s The Look of Love was another example of a song that sounded fairly neutral, yet offers enough clarity and detail to enjoy the overall composition.

The tighter seal made a difference, no matter what was playing. In the gym or on the street, the noise isolation felt natural. The only issue was that we did have to raise the volume to 80 per cent or higher more often than we would’ve liked in those circumstances.

By selling the BE Free8 for $150, Optoma is in line with Apple’s market-leading AirPods, but with a bit better sound quality. They are light and comfortable to wear, and finding the right seal is a matter of experimenting with the different gels. Audio quality benefits from finding the best fit, even if the neutral soundstage here isn’t going to blow everyone away.

Unlike the $50 BE2 Optoma released as budget wireless sports earbuds, where there was no aptX support, the BE Free8 are optimized for both iOS and Android. Putting a piano black finish on something that is likely to come in contact with perspiration and active lifestyles all but guarantees scratches and smudges, so the shiny look may not last too long.

There are plenty of manufacturers getting into the truly wireless earbud game, but only a few garner our full recommendation at present. Apple’s AirPods are the most obvious choice because of the price point, as long as you don’t mind the golf-tee design and lower sound quality. Bragi’s The Headphone, come in at a similar price point and are among the best available right now when it comes to sound performance.

More expensive options include the feature-laden Jabra Elite Sport, which offer more features, solid sound, and more durability. The Nuheara IQBuds aren’t sporty, but do offer some neat audio tinkering for those seeking some customization, or suffering from hearing loss.

Resistance to sweat is always hard to measure, in spite of whatever rating the manufacturer has achieved. The BE Free8 should be able to accord themselves well for active listeners, but we believe the shiny veneer won’t last long when they get worked in. The Bluetooth connection is impressively consistent, though we did notice some dropouts upon occasion at weird times. Despite that, we would use these expecting the wireless connectivity to hold up well.

If you want something with a bit better sound than Apple’s AirPods, and like shiny things, the BE Free8 are worth checking out. We think you should have a look at Bragi’s The Headphone first, however.

Topics
Netflix expands its spatial audio, number of devices that can download content
Peacock does away with free tier for new subscribers
Klipsch follows the success of The Fives with The Sevens and Nines powered speakers
Marshall’s latest Bluetooth speaker has four drivers for 360 sound
Best 75-inch TV deals: Get a large screen for the Super Bowl
Flash sale drops the price of this 55-inch QLED 4K TV to just $370
Sony’s 2023 AV receivers are Sonos-ready and work with wireless speakers
Rode’s NTH-100M headphones are built for gamers
The best movies on Disney+ right now (February 2023)
Perfect for the Super Bowl, Samsung’s Frame TV is $1000 off
Save 40% on Peacock Premium when you subscribe today
How to watch Super Bowl 2023
The best movies on Hulu right now (February 2023)