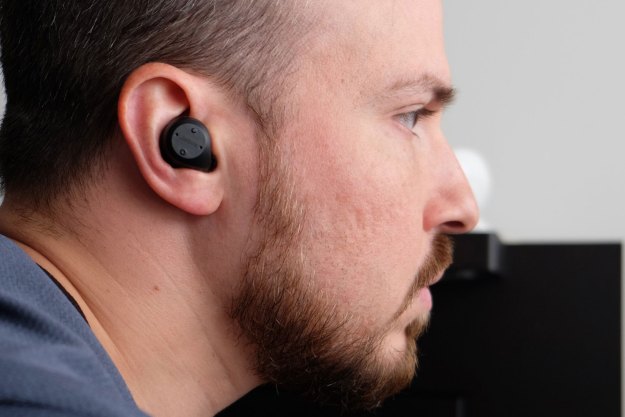 “If you want more than just cord-free music, the Elite Sport deliver in a way other wireless earbuds don’t.”

Apple may have cast a spotlight on true wireless earbuds with its new AirPods but the concept isn’t new, and other brands have been working hard to do it just as well as the mega brand, or better.

Jabra recently entered the fray with the Elite Sport true wireless earbuds. Taking many of the elements that have served the company’s other wireless headphones well, Jabra’s Elite Sport can handle the rigors of a good workout while also tracking activity and playing music, making them a great choice in the burgeoning new “hearables” marketplace.

The Elite Sport’s packaging is entirely in line with Jabra’s other devices in this category. A flap reveals the two earbuds nestled inside the box, with a small charging case positioned just below. Neatly laid out beneath are a selection of accessories, including three sets of ear gels, three sets of foam tips, and three sets of ear wings, each in large, medium, and small sizes. A short micro-USB cable for the portable charging case is also included.

Paperwork is limited to a quick start guide, warranty information and yellow sheet with a code to install the free Jabra Sport Life app for iOS or Android.

The Elite Sport are essentially based off Jabra’s Sport Pulse Special Edition in-ears, but with all ties severed. Both headphones boast a heart rate sensor embedded in the left earpiece, and a similar feature set, but the Sport Pulse aren’t completely cord-free; Like most wireless in-ears, they have a cable connecting the two earbuds together.

Jabra’s Elite Sport are a lot like the Sport Pulse, but with all ties severed.

The two headphones are kindred spirits otherwise, but there are some other important distinctions worth noting. To squeeze everything into the earpieces, the Elite Sport form factor is bulkier than the Sport Pulse. Part of the reason is to migrate playback and volume controls from the inline remote attached to the connecting cord into the ‘buds themselves. Another reason is to ensure the Elite Sport can take a physical toll. Jabra has made the ‘buds waterproof with an IP67 rating, good for 30 minutes submerged in 3.3 feet of water. That allows the buds to come along for shorter pool excursions, but saltwater is a no-go.

The left earbud has volume up and down buttons on the outer shell, and, as per usual, holding volume up skips to the next track, holding volume down goes back one. On the right earbud, the top button is an action button that works primarily with Jabra’s Sport Life app. The bottom one plays/pauses audio and answers/ends phone calls. Holding it for two seconds activates Siri or Google Now, double-clicking it temporarily mutes playback to prioritize ambient audio, and holding it for more than three seconds powers off the Elite Sport.

The included case is of vital importance as it’s not only the only way to charge the earbuds, but it’s also the best way to ensure neither one gets lost. Placing them inside and closing the lid also automatically turns them off, making the case a convenient hub you’ll want to bring along.

Battery life is one of the big measuring sticks for true wireless earbuds, and the Elite Sport are about average at three hours of playback time with volume above the midway point. However, an update to the earbuds, unveiled at CE week in July 2017, pushes that number to 4.5 hours for later models — a serious improvement. The battery inside the case also ramped up from two more charges for a total of nine hours, to a new total of 13.5 hours, according to Jabra. A battery indicator appears on iOS devices for a visual on how much juice is left. Only a few models beat the Elite Sport at present, including Bragi’s The Headphone and Apple’s aforementioned Apple AirPods, though more are sure to follow.

The added bulk means each piece protrudes further out of the ear, making them noticeable, yet no less agile and diminutive. Nestling each one into our respective ears didn’t feel out of place or cumbersome, though finding the right fit requires plenty of experimentation with the gels, foam tips, and ear wings.

You can add specific exercises, so a dumbbell press could be thrown in as easily as a yoga routine.

The Elite Sport immediately went into pairing mode once we turned them on, with voice prompts guiding us step-by-step. All told, we were ready to go in less than two minutes.

The Sport Life app offers more control over certain features, and offers a direct path to upgrading the firmware in Headphone Settings, which we did once over the course of this review. The ambient noise setting we noted earlier is called “HearThrough,” which is off by default. Toggling it on offers two choices: lower the music and allow ambient noise to filter in, or mute it completely to hear everything else. You don’t need the app to turn the feature on — double-clicking the lower button on the right does that — but it’s the only way to choose between the two modes.

On the fitness side, there are four tests specific to heart rate. The VO2max tracks fitness level, Cooper measures endurance, Orthostatic estimates if you are over-training, and Resting personalizes training zones. They aren’t mandatory, but measuring VO2max and resting heart rate can help increase accuracy.

The biggest challenges of any true wireless earbuds go hand-in-hand. They need to stay on securely and play audio without leakage affecting fidelity. Achieving that is all about finding the right fit, which isn’t uncommon for any earbuds, but it took trial and error in this case. Ultimately, we found success with the largest foam tips and medium or small ear wings.

Jabra hasn’t outlined what drivers it used for the Elite Sport, but we suspect many of the internal components are the same, or similar, to the Sport Pulse Wireless SE. cou

Tightening that seal was exactly why Jabra included Comply Foam tips with the Pulse SE, and it did the same here. The one difference is that the tips used for the Pulse SE are noticeably thicker than those included with the Elite Sport. It’s an understandable discrepancy, as the Pulse SE are of smaller stature, but Jabra could have pushed it a little more with the set included here, if only to isolate audio a little more.

That said, with the level of variation offered out of the box, there is a good chance you’ll find the right fit for the Elite Sport. If not, another pair of gels or foam tips of slightly differing size will probably do the trick. We even tried a pair of spare large gels we had laying around, which worked well for the gym because sweat wasn’t a problem, whereas foam tips can deform when exposed to repeated perspiration. We ultimately settled on the largest gels and foam tips that came in the box, and even took the Elite Sport for a dip in the pool once or twice with no problems at all.

When it comes to Phone calls, the Elite Sport were not as consistent as the Pulse SE, but far better than we might have expected without a microphone dangling from a cord. Callers sometimes noted an audible “distance” when hearing us, but for the most part, they didn’t complain. Hearing others was very easy, and again, a tighter seal made a big difference in clarity. We began using the Elite Sport often for simple calls around the house to talk hands-free.

If you are in tune with Jabra’s Sport Life app and the fitness features it offers, there is not much different here. The heart rate sensor is almost certainly the same one used in the Pulse SE, so from reading one’s heart rate, down to the voice prompts along the way, the experience falls in line. Naturally, this includes activity tracking for workouts, making them more than just about playing music cord-free.

The app is the go-to for tracking exercise of any kind, but it leans more toward what you would do the in gym based on the presets available. You can add specific exercises, so a dumbbell press could be thrown in as easily as a yoga routine, for example. That they work with third-party apps like Runkeeper, Runtastic, Strava, MapMyFitness and Endomondo does present some additional flexibility. While those who bought the Elite Sport before the battery upgrade are out of luck there, previous buyers can take advantage of a software upgrade to the app that includes new EQ features for customizing the sound.

Jabra’s warranty comes in two parts. There is a limited one-year warranty with a proof of purchase. Registering the Elite Sport with the company through the Sport Life app raises that to a three-year warranty to cover damage due to sweat. That does not cover accessories like ear tips, nor does it appear to include the charging case.

The Elite Sport are a culmination product, in some respects, as Jabra has evolved its sport earbuds into a solid product that fits well and leaves the cords behind, but you pay a price for the result. At $250, they are expensive, especially when Apple’s AirPods are much cheaper at $160. That said, many feature-packed true wireless earbuds are priced at $250 or higher, and Jabra has packed in ruggedness, fitness features, and a three-year warranty covering sweat-induced damage to sweeten the deal.

Apple didn’t start it, but it has set a bar and tone for this emerging category with the AirPods, thereby making more people aware that true wireless earbuds are actually a thing. The important distinction, however, is that Apple never really designed those to take a beating, and it’s too early to tell how much endurance and resistance they truly have.

There are now several competitors in the true wireless space, but the number is diminished when you start including rugged designs made for workouts. Potential options include Bragi’s somewhat plagued fitness hearable, the Dash, and the aforementioned Samsung Gear IconX, the latter of which can now be had for less than $200, but still have serious battery concerns. That makes Jabra’s Elite Sport one of the best contenders for those who want to pump some iron completely cord free.

Perhaps the real question here is how to make sure not to lose one or both earbuds. We mentioned the case’s indispensable role in not only charging them, but also ensuring they stay together in one place. Jabra doesn’t make clear how much it would cost to replace one of the earbuds or the case, though the company normally charges around $15 – $20 just to replace ear tips and other accessories.

The waterproofing and sweat-resistance should ideally ensure a higher level of durability. After all, Jabra expects you to use these while breaking a sweat. Some maintenance doesn’t hurt, like cleaning the earbuds carefully to wipe away any excess perspiration or salt. Wiping them dry after water contact, and keeping the case clean are also good ways to keep them running strong.

Yes. If you want more than just cord-free music, the Elite Sport deliver in a way others don’t in this nascent category. Waterproofing, sweat-resistance, and a three-year warranty offer some real security when it comes to longevity. Plus, they sound pretty good, and there’s more than one way to tighten the seal.

Updated: Added info about upgraded battery for newer versions, pushing the earbuds to 4.5 hours of playback per charge.