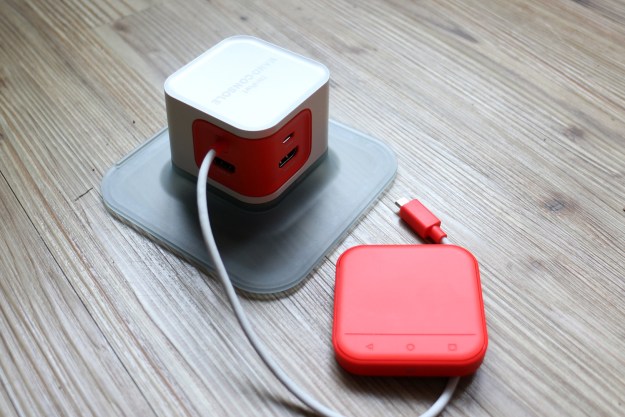 “The SlimPort Nano-Console is far too limited to be worth even the $50 it costs.”

The SlimPort Nano-Console enables you to mirror selected Android smartphones or tablets on your main TV. It’s being billed as a kind of set-top box and gaming console extension for mobile devices. It’s a smart idea, but the makers have taken their time putting it on sale, compatibility is limited, and the execution leaves a lot to be desired. With the wealth of smartphone-connected streaming solutions out there, this is a tough sell even for $50.

The SlimPort Nano-Console is a strange little device that hooks up to your TV via HDMI. It’s a white plastic cube with orange highlights, and a wider, thin plastic base with a small rim that’s designed to hold your smartphone or tablet in place.

You can plug it into a standard charger using a USB to MicroUSB cable, and there’s another MicroUSB cable permanently attached that’s supposed to be plugged into your smartphone or tablet, so it can charge while you’re using the Nano-Console.

It’s quite ugly, and the white and orange color scheme, which extends to the cabling, doesn’t exactly blend in with the average piano black TV or wooden TV stand. Thankfully, when the device is propped in front of it, the Nano-Console is hidden from view.

What does it do?

The main idea is to throw whatever is on your device up onto the big screen in a stable way with low latency. It’s efficient enough to enable you to play fast-paced games, and you can stream movies from services like Netflix, or browse the Web.

To help you do that without having the Nano-Console on your lap, there’s a detachable Bluetooth remote, which is an orange square a couple of inches across that’s comfortable to hold and works a lot like a laptop touch pad. The three buttons at the bottom edge mirror your standard Android controls for easy navigation. It takes a little getting used to, but with some practice you can swipe through screens or photo slideshows, and the home button is a handy shortcut.

The trouble is that Android is a touch interface. For a lot of games and apps, having a cursor on screen and trying to control it with a disembodied laptop trackpad is like some kind of strange torture. It’s maddening for games, but even general navigation can be frustrating. If you really want to use the Nano-Console for gaming you’ll pair a Bluetooth gamepad instead, but you’ll have to buy it separately.

Since this cube is going to sit in front of your TV anyway, SlimPort decided to add an extra HDMI port, so you can hook up your laptop or whatever you want without having to find a port on the back of the TV.

There are some glaring problems with the Nano-Console that simply cannot be overlooked. Compatibility is a major issue. The SlimPort technology that the Nano-Console relies on is only present in a handful of Android devices. It works with a lot of LG phones, a couple of Blackberrys, and the old Nexus 7,5, and 4, but not much else. You can check out the full list here.

It’s clunky, it doesn’t work perfectly, and it stands out like a sore thumb. I can’t find a reason to recommend it.

I tested it with the Nexus 7 and it worked most of the time, but sometimes it would inexplicably drop the connection and my TV screen would go dark. I’d have to unplug the tablet and plug it back in again to get the connection back. On occasion the sound would continue to drop in and out, but the picture disappeared completely pretty consistently, which gets old really fast.

There’s another big problem here. SlimPort offers an HDMI adapter for $30 and it does everything that the Nano-Console does, it just lacks the Bluetooth remote, which, frankly, you can live without. I’ve been using it for a while and it works just fine, though it does also occasionally drop the connection for no obvious reason, so you have to plug it in again. It’s an unobtrusive cable with a Micro USB at one end and an HDMI port at the other. There’s also room to plug your existing charger in there, so your device can charge while it’s connected.

So, what does the Nano-Console actually offer over the basic SlimPort cable, or over a Chromecast, both of which are significantly cheaper? The answer is not a lot. If you want to browse online or stream content, then the Chromecast is a much better device that doesn’t require any plugging in.

The latency issues for gaming with the original Chromecast aren’t likely to be such a big issue in the new model, but if that’s the problem you’re trying to solve, buy a SlimPort cable and a Bluetooth gamepad instead. The Nano-Console controller is not suitable for the vast majority of games anyway.

I found one use case that my existing setup (Chromecast or SlimPort cable) couldn’t cater for, and that was streaming a certain TV service through a location altering VPN, without having to get up to choose the next movie or episode. Other than that, the remote often proved to be more of a pain that it was worth.

The ability to mirror your smartphone screen on your big TV is undeniably handy, but there are better ways of doing it than the SlimPort Nano-Console. Considering the new Chromecast costs $35 and can employ any Android as a game controller, the $50 SlimPort Nano-Console looks expensive, fiddly, and limited by comparison.

Moga Pro Power Bluetooth Gamepad ($16.65)
You’ll need a proper gamepad if you want to play games from your Android device on the big screen.

SlimPort HDMI adapter ($30)
This might be a better buy than the Nano-Console for many people.

The lack of latency issues with a wired connection is offset by the inconvenience of having to plug in, and the fact it intermittently drops the picture. There’s no way you can play games with the Bluetooth trackpad, so you’re going to have to buy a controller as well. It would make more sense to buy the $30 SlimPort cable instead.

The SlimPort Nano-Console is not a bad idea. Microsoft is betting big on the concept of your smartphone hooking up to a monitor with the new Lumias, but Windows 10 has Continuum to make the process smooth. In practice, using the Nano-Console feels awkward. It’s clunky, it doesn’t work perfectly, and it stands out like a sore thumb. I can’t find a reason to recommend it.

Topics
Video-editing app LumaFusion to get a Galaxy Tab S8 launch
The best waterproof Bluetooth speakers for 2023
The best OLED TVs for 2023: from LG, Sony, and Samsung
The best ultra short throw projectors for 2023
The best Bluetooth speakers for 2023: Marshall, Sonos, JBL, and more
Best 75-inch TV deals: Get a large screen for the Super Bowl
Flash sale drops the price of this 55-inch QLED 4K TV to just $370
Netflix expands its spatial audio, number of devices that can download content
Sony’s 2023 AV receivers are Sonos-ready and work with wireless speakers
Rode’s NTH-100M headphones are built for gamers
The best movies on Disney+ right now (February 2023)
Perfect for the Super Bowl, Samsung’s Frame TV is $1000 off
Save 40% on Peacock Premium when you subscribe today