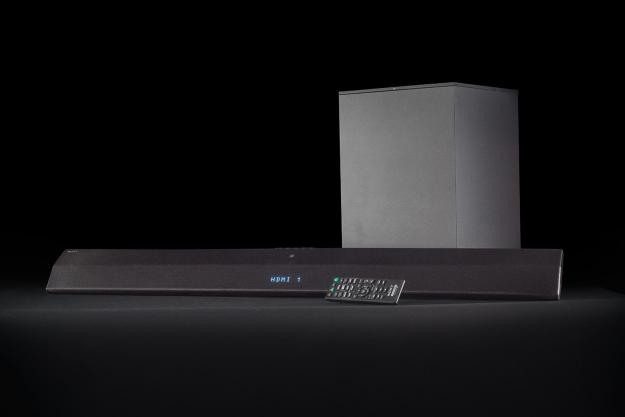 “In the battle for the best entry-level sound bar, the CT770 is a dangerous contender”

Sony is fighting its way back to prominence in the home audio segment. While the glory days of the Walkman may never return, the company has been making big moves lately, including the creation of a brand new portable speaker lineup, as well as doubling down on hi-res audio technology.

The HW-CT770 sound bar is Sony’s latest plea for your attention. Looking to edge out other budget-friendly offerings from the likes of Samsung, Vizio, and others, the CT770 presents a stylish design, a stable of coveted features, and some pretty impressive sound performance for its manageable $450 price tag.

The CT770 is a diamond-shaped bar with sleek silver accents that takes up a fair chunk of real estate. The sound bar can be laid flat on a table top, or propped up toward your listening area. At just over 40 inches, the bar is far from the longest we’ve seen, but it stretches back a deep 4.5 inches when laid flat, and that depth is all the more accentuated when it’s oriented vertically. Taking a quick glance along the back panel, we were delighted to see an arsenal of ports, including three HDMI inputs, an ARC HDMI output, a digital optical input, and a 3.5mm analog input.

The CT770…takes up a fair chunk of real estate.

Once we’d freed the bar from its rather large box, we liberated the hefty wireless subwoofer beneath, which sports a plain-jane black cabinet and no external controls aside from power and pairing keys. As we ran our eyes along the exterior, we noted a beveled design across the top which helps to break up the monotony. Underneath the sub we found a fully exposed down-firing speaker.

Inside the box was a respectable collection of accessories. Next to the signature Sony remote (in all its stubby glory), we discovered a full manual, a pair of batteries, attachable feet/wall mount brackets, and both an HDMI and a digital optical cable.

While most of the CT770’s spoils can also be found on its comparably-priced competitors, the multitude of inputs was a pleasant surprise. Offering three HDMI inputs allows users to employ the bar as a surrogate A/V receiver, and with its ARC connection (ARC explained here), you can easily load up on components connected to both the bar and your ARC-enabled TV, all linked over a single HDMI connection. That’s an enticing bonus, and we’ve seldom (if ever) seen similar options offered at this price point.

If we’re to don our glass-half-empty hat, however, we’ve got to point out that we took issue with the placement of the connection panel – though we’re not sure how Sony could remedy the issue. As the bar lies flat, the connection bay is no problem because all cables are hidden discreetly out of site. However, propping the sound bar up vertically (which offers better clarity, despite Sony’s claims otherwise), the CT770 will easily block your TV’s infrared receiver, and connected cables become easily visible. Right-angled HDMI cables can fix these woes, but that means an extra investment.

That said, the sound bar still sounds pretty good laid flat. Part of that is due to diffraction hardware around the drivers, designed to spread out the sweet spot. The rest is due to a bit of digital sorcery, as Sony included a gyroscope inside, designed to trigger DSP adjustments dependent on the bar’s orientation.

The system has plenty of other DSP tricks up its sleeve as well, including several sound presets like Cinema, or Music, Sony’s proprieatary Clear Audio +, stereo virtual surround, and a digital EQ, which can be accessed from the Amp Level button on the remote. The system also decodes most major surround codecs, including DTS HD, DolbyTruHD, and Dolby Digital.

Controlling the CT770 is easily accomplished using the remote, which includes hot keys for all of the sound presets, basic sonic controls for subwoofer level and volume, and, our personal favorite, a control panel that allows you to control playback from your Bluetooth-connected mobile device. You can even pair your device from the couch using the remote, or choose one-touch pairing via the NFC hotspot on the top of the bar. Additional control is available via Sony’s Songpal app, or using the basic touch keys on the top of the unit.

Beneath the CT770’s sparkled mesh speaker screen sits a four-pack of drivers, including dual 20mm tweeters, and dual 60mm drivers. The system is powered by 110 watts of digital amplification. The remaining 120 watts are all reserved for the subwoofer, which harnesses the power to push its 6-inch down-firing driver, set in a bass reflex cabinet.

Additional features for the system include both 3D and 4K pass-through with HDMI 2.0 support.

Considering the unit’s bank of HDMI inputs and ARC connection, the ideal way to connect link the sound bar to a television is through the ARC HDMI input of your TV (provided one is available). This will allow the sound bar to respond to basic commands from your TV’s remote, and link all of the components connected to the bar and your TV via a single cable.

If your TV doesn’t have ARC HDMI, you can also connect the bar to the TV via its digital optical output. This method will still allow you to connect components to the bar’s three HDMI inputs, and run the video to your TV via HDMI, but any sound from the TV itself will need to be routed from the TV to the bar’s digital optical input. Finally, if you don’t have an optical output, you can connect the TV from the RCA outputs of your TV via the CT770’s 3.5mm analog input.

The CT770’s most prominent and appealing performance aspect is its penchant for detail and clarity. In that department, this little bar punches above its weight, offering a keen and deft touch to dialog. It also does a great job digging up the subtle details of all the little moments, be it a footstep on a gravely road, a swipe of a character’s hand across canvas, or the ambient change in the sound as it reflects upon different surfaces.

One prime example of the latter trait was showcased during one of our favorite movies for testing audio, Skyfall. As Javier Bardem’s Silva is locked in an isolated glass cell for his crimes, the difference between his booming dialog from within the chamber and M’s dry and present voice from outside the glass was striking. A similar experience came from the meeting between Harvey Dent and the Mayor in Dark Knight. As the Mayor turns toward the window, we were drawn in as the dialog bounced off the glass, only to be abruptly jolted out of the moment (spoiler alert) when the hanged Batman imposter hits the window.

This slender sound bar punches above its weight, offering a keen and deft touch to dialog.

The CT770 gleans its touch for the finer moments from a tight, and sharply cut upper register. The high end was occasionally abrasive at the attack of sounds, like a blade scraping against a marble countertop. However, the icy color never crossed the line to uncomfortable, and it allowed for accuracy and presence across the sound field. The midrange was more subtle, though the bursts of action from gunshots or roaring engines were still just a touch brighter than we wanted. Then again, small speakers will always have their limitations.

The CT770’s knack for reaching out into the room also aided its delivery of the more powerful moments, where it did a nice job preserving clarity. Sonically, one of Skyfall’s most challenging scenes is the explosion and subsequent train wreck in the Tube as Bond chases Silva down. And while the scene was a tad chaotic, the CT770 did an excellent job of keeping balanced, pounding with great power down low, while showcasing engaging detail in each fallen piece of brick and mortar.

As for the bass in general, it was possibly our least favorite aspect. We wished we could tune the subwoofer to cover a bit more of the lower midrange, and though it had its moments of power and tight musicality, the large cabinet offered a bit too many booming overtones at times. Still, when rumbling force was called upon, the sub answered, mostly to positive effect.

Finally, we really enjoyed the width and breadth of the CT770’s stereo image. The bar does better than most we’ve evaluated in its class when it comes to displaying virtual surround, outlining the placement of effects with accuracy, and creating a more engulfing experience than we expected. While it still feels like stereo, it’s a big stereo field, and one we enjoyed throughout our evaluation.

Music playback was also a welcome inclusion in the CT770’s talents. The bar did a fine job outlining brilliance and clarity in the midrange and treble, revealing the subtleties of the bending of a guitar string, the resonance of a cymbal crash, and the deeper layers in the timbre of voices. Again, we wished for a bit more accuracy from the subwoofer on some tracks, but we still enjoyed the overall performance for most of our catalog.

At $450, Sony’s new HW-CT770 may be a bit pricier than competing entry-level sound bars, but you get a lot for your money. The bar brings balance, detail, and power to your home theater, plus it offers a wealth of features often reserved for systems in the upper class. Sony may not be winning the consumer audio war as of yet, but when it comes to the battle for the best entry-level sound bar, the CT770 is a dangerous contender.