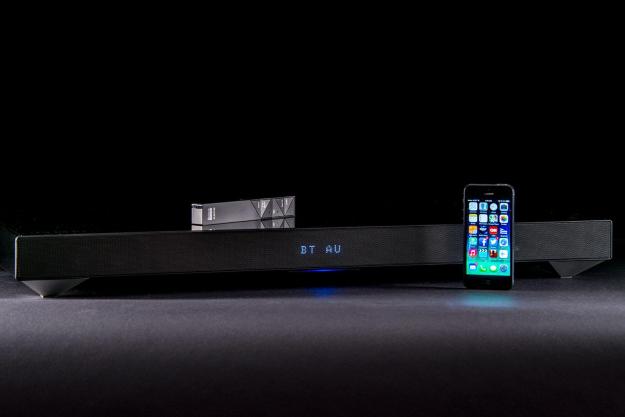 “The XT1 sets the standard for this new sound base speaker category.”

At this point, it’s common knowledge that flat-screen TVs tend to sound pretty bad. Now, along with the nearly ubiquitous sound bar, an even more succinct solution has arisen in the form of the sound base (or sound platform, sound stand, etc.). Essentially a flattened home theater system, the sound base is designed to be a platform for your TV, and an ambassador to your ears. Unfortunately, many sound platforms compromise far too much sound quality in the name of space economy.

But it doesn’t have to be that way. Sony’s affordable new HT-XT1 is sterling proof that there is a place in the market for the sound base. Boasting clarity, presence, and a punch of bravado, the $300 XT1 makes for an enticing add-on device, merging seamlessly with your display as if part of the plan from the very beginning.

Hoisting the slim and sturdy XT1 from the box, it was immediately clear that Sony has decided its “neutral” design theme – a matte-black frame with a sparkling glass top – is appropriate for more than just its new SRS portable speaker line. Whether it’s corporate lethargy, or inspired product unity, the XT1 is strikingly nostalgic of our experience with the SRS-X7 speaker, right down to the square touch keys on the top of the unit.

That said, we had no complaints as we set the XT1 on our TV stand, enjoying its modern design, from its sparkling top to its pyramid-shaped legs. Digging through the box revealed few accessories for the succinct unit, including only an optical cable, a pair of batteries, instructions, and a super-slim remote, which resembled what we think a robot’s cigar might look like.

The XT1 looks great under a TV, and with 66 lbs of support, it’s really only limited by the amount of real estate available for a TV’s stand. The dimensions are about 28 x 3 x 12-inches, making it best suited to support 50-inch screen sizes (which might be pushing it) or smaller.

The phrase “a place for everything and everything in its place” seems particularly relevant to the sound base segment, and Sony’s unit is no different, laying everything out in a concise format. At the front-center of the XT1 is an LCD display that shows the input source and menu options, accompanied by a white LED bar beneath, which turns blue when connected to your mobile device via Bluetooth.

At the back of the unit is a small input panel, with an impressive number of ports for the price, including a digital optical input, an analog 3.5mm input, an ARC-HDMI connection for compatible TVs, and 3 HDMI inputs for additional source components.

Basic controls like source, input selection, and Bluetooth pairing are available on top of the unit, but the majority of controls are handled by the quirky little remote. The angled buttons at the top control volume, power, and source selection, as well as the ‘Voice,’ and ‘Sound Field’ features, both of which control DSP. Voice allows for EQ templates to accentuate dialog (we found the 2nd option best), while Sound Field changes the effect for sources like music, or movies. However, Sony’s clever ClearAudio Plus feature is designed to automatically choose the best sound effect for the source, and it works pretty well.

Popping the remote open like a James Bond gadget unveils another panel of controls beneath. Extra controls include subwoofer level, display brightness, and menu options like EQ (tone), as well as some more intricate features like engaging ARC control so the platform powers on with your TV. The pop-down design is cool, if not a tad awkward, but most of the deeper settings are already optimized, so users shouldn’t have to venture beneath the hood often.

Two oval-shaped stereo drivers at the front face handle a good deal of the audio workload, though at 1.3 x 3-inches they are definitely compact, limiting their range. To handle the low end, the XT1 employs dual down-firing 4-inch woofers at the bottom, which use the ported cabinet to resonate low frequencies. On board amplification supplies a claimed 35 watts to each of the stereo channels, and 100 watts to the subs. The XT1 can handle most common digital audio codecs, including Dolby TrueHD, DTS-HD Master Audio, and DTS-HD High Resolution Audio.

Setup is pretty darned simple. For those with ARC-equipped TVs, we recommend using the ARC-HDMI connection, which allows for a single cable connection, as well as basic control of the XT1 with your TV remote. Alternatively, users can connect via digital optical cable, or as a last resort, the analog 3.5mm input.

Clarity, presence, and detail are the tools the XT1 best leverages to its advantage, providing a striking improvement in sonic performance over the vast majority of flat screens. Throughout our evaluation, the unit offered a smooth and clear touch to dialog and upper-register effects, a resigned, yet engaging punch to gunshots and guttural explosions, and a surprising level of stereo movement.

The first indication that the little box had some serious muscle was the fact that it was able to seamlessly supplement audio for an absolutely monstrous 79-inch television we’re currently reviewing. We obviously couldn’t set that titan on top of the XT1, but putting the platform in front worked just fine for a belt of audio improvement. The sound field wasn’t expansive enough to cover the full breadth of such a wide screen, but it did enough to allow for suspended belief.

In the end, the XT1’s clarity and presence won us over.

The sound was definitely a touch bright at the attack at times, but there was an impressive level of precision and fluidity, as well. We heard vivid detail in the rippling oceanscape of Life of Pi, and well-defined consonants and timbres in the dialog of all of our test content. The unit also rendered firefights with some pleasant impact, as The Joker spattered shots from his machine gun in Dark Knight, or James Bond squeezed off glinted rounds from his Walther PPK in Skyfall.

There were a few underwhelming moments in our evaluation, such as the chase scene in Oblivion where we wished for more crunch in the lightning bolts, and more sizzle in the futuristic turbines of the spaceships. And, of course, the low end reached neither the heart-pounding boom, or the musicality you’ll get from a full-sized dedicated subwoofer – even of the sound bar variety – making us wish that, in all those connections, Sony had added a subwoofer output. Still, bass was potent enough to bring the action off convincingly, and we mostly just enjoyed the ride.

The first track we streamed to the device over Bluetooth, Nickel Creek’s “Reason’s Why,” nearly had us convinced the XT1 is better employed as a music system, blowing a lot of early entries in this product category right out of the water there. Sara Watkins’ vocals were as present and heartbreaking as ever, and the subtle carving of the guitar and mandolin strings was brilliant.

We were a bit less impressed as we moved away from acoustic tracks, however. The silvery touch was a little synthetic and brittle on heavier rock tracks, and we found ourselves missing a lot of warmth in the midrange as the small drivers handed duties off to the subwoofers. Conversely, the subs couldn’t bring the pain when it came to our favorite hip-hop tracks like Too Short’s “Money In the Ghetto,” making the overall experience a bit ho-hum. But, in the end, the XT1’s clarity and presence won us over. For $300, there’s just a lot of value packed into this device.

While we’ve never heard a sound platform that can take the place of a true 2.1 speaker system, Sony’s XT1 comes about as close as we’ve encountered. Packing smart looks, versatility, solid performance, and an approachable price, the XT1 sets the standard for this new sound base speaker category.