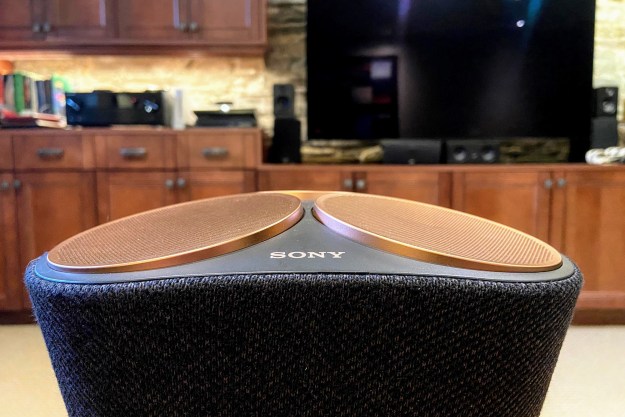 “An intriguing but pricey speaker that doesn't quite live up to the hype.”

When Sony introduced its 360 Reality Audio (360 RA) music technology — an immersive, 3D format designed to re-create the experience of listening to live music — the only way to listen to it was using a set of headphones.

They’re both designed to optimize 360 RA playback, but they also offer a way to upscale regular stereo tracks into a more immersive experience if you want.

Sony was kind enough to send Digital Trends an RA5000 to try out, so we put the unusual-looking speaker to the test to see if it actually delivers a listening experience worth investing in. Here’s what we found.

Sony keeps things simple with the RA5000. Inside the fully recyclable box you’ll find the speaker, its power supply, and a collection of printed material like a quick-start guide, safety information, and warranty documentation. It’s a bit surprising — especially given the $700 price tag — that Sony hasn’t thrown in a 3.5mm cable or two, but perhaps the expectation is that you’ll buy one if you need it.

With its copper-grilled speakers; curvy, fabric-wrapped body; and tall stature, it’s going to be controversial.

For the last few years, Sony has been enamored with black or charcoal devices with copper accents. You’ll find this color scheme on its WH-1000XM4 flagship wireless headphones and its excellent WF-1000XM3 true wireless earbuds, but its most bombastic display arrives with the RA5000.

With its trio of look-at-me copper-grilled upward-firing speakers; its curvy, fabric-wrapped body; and its tall, 13-inch stature, I suspect it’s going to be a controversial purchase. I happen to really dig the way it looks, but my family members are split over the aesthetics.

Ordinarily, if a speaker isn’t your cup of tea design-wise, you can simply tuck it away in a bookshelf or stick it in a corner behind a plant. That’s not going to fly with the RA5000.

While it can still fill a room with sound from almost any position, the closer you can get it to a central location, the better it will be able to fulfill its mission of true 360-degree sound.

But this raises two questions: How do you run power to a central location (there’s no onboard battery), and how do you disguise the enormous power brick?

Sadly, I don’t have an answer to either question. For my review, I simply placed the RA5000 on a coffee table and let the power cord dangle over the edge. A nearby extension cord under my couch served as the power source, but the tripping hazard this created (not to mention how unsightly it looked) means that it would never work as a permanent location.

A total of six touch-sensitive buttons sit along the top edges, which give you access to the most commonly used functions like playback, volume, source, Bluetooth on/off/pairing, and sound calibration.

Sony doesn’t include a remote control, presumably because a phone is a requirement to use the RA5000.

Another tricky aspect to the RA5000’s design is the use of metal grilles above the three up-firing drivers. While visually eye-catching, these thin shields are apparently very easy to dent. Our review unit arrived with one very noticeable bruise and one slightly smaller one. That’s something to keep in mind if you want to place the speaker in a very central location (which is exactly where Sony suggests you put it).

The Sony Music Center app acts as your guide to configuring the RA5000, giving you access to settings like EQ and toggling the speaker’s Immersive Audio Enhancement mode on and off. It also lets you trigger the speaker’s automatic sound calibration, though this can also be done from the touch-sensitive controls that line the top edge of the cabinet.

Using the SRS-RA5000 as a Bluetooth speaker is a snap — simply long-press the power button to start pairing mode and then select the speaker from your phone’s Bluetooth device list.

But to get the most out of it, I encourage you to take the additional step of adding it to the Google Home app so you can take advantage of Chromecast audio.

Doing so opens up all the features that make the RA5000 unique: It enables 360 RA streaming, something that isn’t supported over Bluetooth. It lets you stream much higher quality stereo tracks (up to CD quality), which is also impossible over Bluetooth. Finally, it lets you manage the speaker as part of a larger multiroom audio system if you own other Chromecast-enabled devices, and if you own a Google Assistant smart speaker, you can control the RA5000 with your voice.

Amazon Alexa users can also control the speaker via voice commands by adding the RA5000 as a device in the Amazon Alexa app.

The SRS-RA5000 is a speaker with a specific mission: To give folks a way to listen to Sony 360 RA music without the need for headphones while also letting them “upgrade” their non-360 RA sources into a more immersive sound experience. Given its hefty price, these two scenarios had better be awesome; otherwise, it’s going to be hard to give the RA5000 our recommendation.

I simply don’t appreciate what 360 RA brings to the out-loud listening experience.

To really get a sense for how it handles these tasks, I created several playlists inside the Tidal app. I started by combing through Tidal’s 360 RA track library for songs that I’ve heard countless times before — Heart’s Barracuda, Billy Joel’s Big Shot, Pharrell Williams’ Happy, and Dave Brubeck’s Take Five. Then I added the standard hi-fi stereo versions of these tracks so that I could easily flip back and forth between the two formats.

I also listened to these stereo versions with and without Sony’s Immersive Audio Enhancement feature.

The verdict? The RA5000 does a decent job of rendering 360 RA tracks with their signature open-air, ambient sound. The upward-firing and side-firing drivers give these songs both width and height that absolutely delivers a more immersive experience than when you listen to the stereo version, even when Immersive Audio Enhancement is used. Not sure if you’re actually hearing 360 RA audio? An LED indicator light under the speaker glows cyan when it detects the format.

But as noticeable as the effect is, I simply don’t appreciate what 360 RA brings to the out-loud listening experience. I find that as it opens and “stretches” the music to fill the room with sound, it has a tendency to hollow out the recordings. Intimate details in the midranges that I know these tracks possess become harder to make out. Lushness and immediacy give way to ambience, and I think a lot of songs don’t survive that transition intact. Then there’s the question of consistency. It turns out, not all 360 RA tracks are created equal.

The upward-firing and side-firing drivers give these songs both width and height that absolutely delivers a more immersive experience.

Fire up the 360 RA version of Heart’s Barracuda, and the RA5000 does an excellent job of letting the iconic rapid-fire guitar licks fill the space. But Ann Wilson’s normally soul-piercing vocals sound like she’s singing with her back toward the audience.

Big Shot loses a lot of the deep bass thrumming that lends that song so much of its nuance, which is super odd given the RA5000 is more than capable of excellent bass response.

Pharrell Williams’ Happy 360 RA is a much better mix, and on the RA5000 at least, it’s more fun to listen to than the stereo version. But I still prefer the way this song sounds when played on a traditional stereo pair of speakers. Only Dave Brubeck’s Take Five sounded significantly better in its 360 RA version.

Is this an inherent problem with the 360 RA format? I don’t think so. Some of the problems I mention above can also be heard when listening with headphones. However, with headphones, the spatial rendering is much better controlled and does a better job of convincing your brain that the songs are being played by a band on stage in an open venue.

The RA5000, despite its 360-degree array of drivers, still acts as a very identifiable source of sound, which diminishes the potency of the 360 RA spatial audio effect.

One thing that I found especially perplexing about the RA5000 is its Bluetooth capabilities. Sony says the speaker is rated for hi-res audio, meaning it can accurately reproduce frequencies from 20 Hz to 40 kHz. The problem is, it only supports SBC and AAC Bluetooth codecs — neither of which are able to transmit hi-res audio.

That would be somewhat understandable if there was no better Bluetooth codec available. But there is, and Sony invented it. LDAC is one of only two Bluetooth codecs to be recognized by the Japan Audio Society as hi-res capable, and yet, for reasons known only to Sony, it hasn’t given the RA5000 LDAC support.

The comparison to the Sonos Arc soundbar raises another consideration: Can this $700 spatial audio speaker do anything other than let you listen to streaming music?

The answer: It depends. You can connect the RA5000 to a newer Sony Bravia TV over Bluetooth, something that Sony says will deliver a very low-latency signal, thus keeping audio and video nicely in sync. But Bluetooth doesn’t allow for multichannel audio like 5.1 or 7.1, and it definitely lacks the necessary bandwidth for Dolby Atmos, which feels like a huge missed opportunity given the RA5000’s upward-firing drivers.

The TV connection feels like an afterthought. It isn’t officially supported on any other brand of TV, and given that the RA5000 doesn’t have an HDMI port or even an optical port, it’s pretty clear Sony wants to keep this speaker predominantly for music listening.

The $700 Sony SRS-RA5000 is a bold experiment — a conspicuous design aimed at bringing an immersive, live music sound to rooms of any size. But that experiment doesn’t entirely succeed, leaving the RA5000 a difficult product to recommend.

For a lot less money, the $200 Amazon Echo Studio uses a similar multidirectional driver setup to support 3D sound formats like Dolby Atmos and Sony’s 360 RA. Plus it can be connected over Wi-Fi to select Fire TV streaming devices for home theater sound, and it’s a full-fledged Amazon Alexa smart speaker. It can’t match the RA5000’s overall clarity and depth, but for the price, it’s pretty awesome.

For a traditional wireless speaker, the $700 Denon Home 350 has many of the same features (except spatial audio) and offers a bigger, bolder, more powerful sound, plus decent stereo separation.

Sony builds high-quality products, and the SRS-RA5000 is no exception. With no internal battery to worry about and an auxiliary analog input should streaming become unavailable, it should last for many trouble-free years as long as you’re careful not to damage it (say by accidentally tripping on that power cord).

No. With the SRS-RA5000’s peculiar design, awkward placement requirements, and high price, only those with a deep desire to experiment with Sony’s 360 Reality Audio should take the plunge.