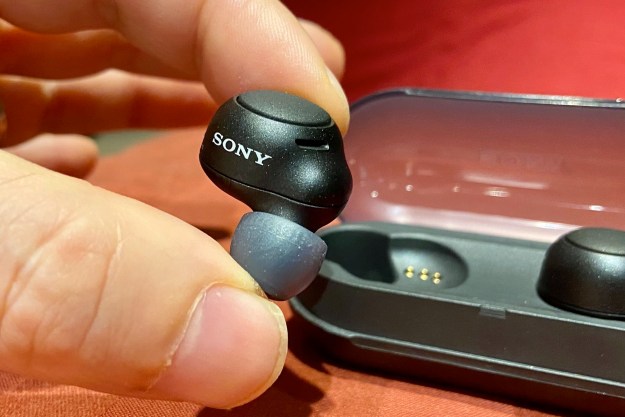 “Sony's basic buds are its most comfortable so far, and they have that Sony sound.”

But Sony has been hesitant to enter the more budget-friendly end of the market. That is until it released the $100 WF-C500, its smallest and most affordable true wireless earbuds so far. But to get the price down, Sony had to carve away a lot of the features that made its other models so compelling. Did it go too far? Let’s take a look.

I’ve tested a lot of Sony headphones and earbuds, and one thing I’ve found to be consistent is Sony’s sound signature. It tends to be warm, like you’re getting a bear hug from your favorite tunes. Bass is always solid but rarely overbearing, and there’s usually a pleasing amount of detail and separation in the mid, upper-mid, and high frequencies. The good news for Sony fans is that the C500 don’t stray from this sonic formula — they sound rich and full, and the Sony Headphones app gives you the same opportunity to tweak the EQ that you’ll find in the company’s flagship earbuds, the 1000XM4.

You can sit the C500 as deeply as you need to, and once placed, they don’t budge at all.

Now, I’m not saying the C500 sound as good as the XM4 — if they did, that would be nothing short of miraculous given the price — but they very much hold their own against every other set of earbuds I’ve tested at the same or similar prices, like the Jabra Elite 3, Soundcore Life P3, Sennheiser CX True Wireless, and Wyze Buds Pro. If you’re a fan of ultra-clear high frequencies, the C500 may sound a bit subdued, but again, the app’s EQ adjustments can help a lot with getting the exact sound you’re looking for.

There’s very good stereo separation. And the C500’s soundstage, while not as wide or deep as its more expensive siblings, is still expansive enough to feel like your music is around you, not buried in your skull. I found that the shape of the buds provides excellent noise isolation, so while there’s no active noise cancellation (ANC), you may not feel its absence too keenly.

The C500 are equipped with Sony’s quality-enhancing DSEE technology, which provides yet another boost to sound quality, especially when listening to highly compressed digital music.

As much as I adore the way Sony’s earbuds sound and (where applicable) cancel noise, they’re not always the most comfortable buds to wear. The WF-1000XM3 and SP800N stick out of your ears a bit awkwardly, and the WF-1000XM4 take up a huge amount of space in your concha, which will challenge those with smaller ears. The C500, by contrast, are far more comfortable. They still fill your entire outer ear like the XM4, but they’re just that extra bit smaller.

These are good controls — their surface area is almost the same size as the earbuds, making them impossible to miss.

It doesn’t look like a big difference when you sit them side by side, but in your ear, it’s a different story. You can sit them as deeply as you need to, and once placed, they don’t budge at all. Combine this with their IPX4 water and sweat resistance and you have a nice little set of companions that will make runners and other fitness enthusiasts pretty happy, but with one big caveat: There’s no transparency mode, so you’ll have to be extra vigilant if you wear them while close to potential safety hazards like traffic.

Another first for the WF-C500 is their use of oversized, physical buttons. In the past, Sony has favored touch controls on its earbuds, which work well, but I’ll take physical buttons over touch controls any day. And these are good controls — their surface area is almost the same size as the earbuds themselves, making them impossible to miss. They take almost no force to press (sometimes a good thing, sometimes not) and deliver a nice tactile click when your press them. They’re not quite as satisfying to use as Jabra’s buttons, but they come very close.

The WF-C500 are missing some helpful features like transparency mode and auto-pause.

There’s no way to modify what the buttons control, but you get pretty much everything you need: Play/pause, track skip forward/back, call answer/end, volume up/down, and voice assistant trigger. You can also use the earbuds independently for music and calls, but depending on which one you pick, you’ll lose access to either volume or track skipping capabilities.

Sony sometimes makes decisions that leave us scratching our heads, like the tiny USB charging cables it includes with its full-size headphones or uneven support for Bluetooth codecs. With the C500, I’m struggling to understand why the company decided to grace the earbuds with a phenomenal 10-hour battery life (easily one of the biggest capacities at this price) but then opted to give the same amount of time to the charging case.

Normally, you can expect a charging case to deliver between two and three full recharges. If that had been the case with the C500, Sony could have created an awesome 30- to 40-hour total playtime experience. But with just 20 total hours, these earbuds actually end up on the lower end of the true wireless spectrum, which is a shame. A fast-charge option gets you an extra hour of playtime with just 10 minutes of charging time.

I won’t say too much about the WF-C500’s charging case. It doesn’t offer wireless charging, but its compact, rounded shape feels great in your hand or pocket. The earbuds snap in and out of their sockets effortlessly, and the case lid opens and closes with a nice, precise movement. The LED indicator lights on the case and the buds are visible through the translucent plastic of the lid.

Call quality on the C500 can be very good, but you’ll need to pick your moments. They don’t do very well with external noise cancellation, and your voice will get drowned out by loud sounds like traffic or wind. But get into a quiet location and it’s an entirely different experience — your voice will come through with plenty of clarity and detail. Unfortunately, even in quiet locations, you’ll find the sound of your own voice is muffled as the C500 don’t have a side-tone option for calls.

The WF-C500 are a very comfortable set of with great sound quality. They’re missing some helpful features like transparency mode and auto-pause, and their total battery life is a bit anemic, but they’re still a good buy for Sony fans looking for a budget-friendly set of buds.

Yes, I think that Jabra’s $80 Elite 3 manage to provide more benefits and a lower price than the WF-C500, which means you should definitely consider them before buying the Sonys.

The Elite 3 have transparency mode, which is a huge convenience for folks who wear their earbuds for hours at a time or even just for a jog around the neighborhood.

They’re supremely comfortable, have better dust and water protection (IP55), and though they won’t last as long on a single charge (7 hours versus 10 hours), they do better for total time (28 hours versus 20 hours). The Jabra Sound+ app can even keep track of the Elite 3’s last known location.

Sound quality is very comparable, but here I’ll give a slight edge to the C500, if for no other reason than Sony lets you customize the C500’s EQ in more ways, and its DSEE tech can definitely improve the sound of some digital music.

It’s always hard to tell after only spending a short amount of time with a product like this, but the WF-C500 seem to be very well built and will probably prove quite hardy. But their biggest advantage in terms of longevity is their battery capacity. As a product ages and you put it through multiple charge/discharge cycles, capacity will drop. If you only start with four to five hours, you could be looking at as little as two hours after a few years. Even if the C500 drop by 50% of their capacity (a worst-case scenario), they’ll still be able to last longer than a brand new set of Apple AirPods Pro.

Yes. You can find other earbuds that cost less and have more features, but what the WF-C500 do, they do very well.

Marshall readies its Woburn, Stanmore, and Acton speakers for the future of Bluetooth