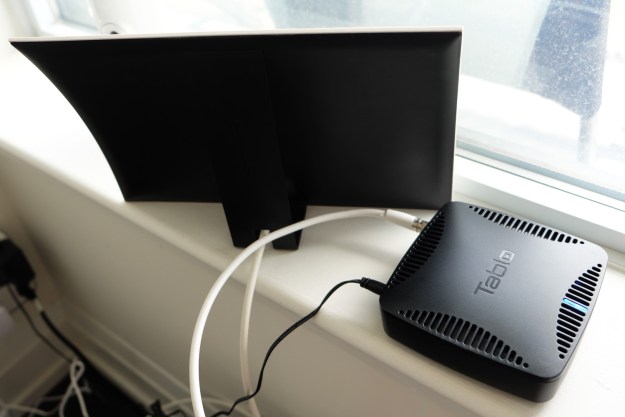 “Even novices can pull free content out of the air with Tablo's easy-to-use Dual Tuner OTA DVR.”

Since its initial days as a startup, Nuvyyo has always prided itself as an alternative to expensive cable bills. The Tablo DVR was designed to simplify pulling in over-the-air (OTA) TV signals, recording them, and streaming them to a growing array of devices. Since the content is always streamed, the box never needed to be near a TV. The new Tablo Dual OTA DVR applies the same principles, yet squeezes in some built-in storage despite trimming the fat for a smaller frame. With dual tuners and expandable storage capability, this is supposed to be a cord-cutter’s dream, but does it truly help liberate you from your cable company?

Unboxing the Tablo Dual OTA DVR is quick because there isn’t much inside. The small tuner box comes with a power adapter, an Ethernet cable, a quick-start guide nestled underneath, and that’s it.

Like the original model, setting up the Tablo Dual OTA DVR is largely managed through a smartphone/tablet app, but deciding where to place the box depends on where the best TV signals come in. There are two things to determine Where a digital antenna will capture the most OTA channels, and where Ethernet or Wi-Fi signal is best.

The Tablo doesn’t have to be anywhere near a television because it only streams live or recorded TV content to through apps or a web browser — you can’t connect it directly to a TV. That makes placement fairly flexible.

We appreciate the smaller form facter, but we’d argue built-in storage is of paramount importance. With 64GB inside, Nuvyyo says the Tablo Dual OTA DVR is good for up to 40 hours of HD content. That’s not a bad start, especially if you’re using the DVR to record shows you have no intention of keeping afterward.

Previously, there was no on-board storage, forcing you to purchase and connect an external hard drive. That’s still an option, as you can go up to 8TB beyond what’s available on-board. The drive would have to be formatted through the Tablo to work, so ideally, you would be plugging it in when empty to avoid erasing anything you might want to hold on to.

There isn’t much to installation of this device. It needs to be reasonably close enough to a wall outlet. The back has a coaxial jack for a digital antenna, plus an Ethernet and USB port. The blue reset button rounds out a limited array.

Deciding where to place the box depends on where the best TV signals come in.

Dual-band Wi-Fi support is somewhat hindered by the odd decision to equip this Tablo with Wireless-N (802.11n) rather than Wireless-AC (802.11ac). Granted, the device will almost always connect at the 5GHz band, but the better throughput provided by AC would be a boon to a streaming device like this.

Plugging it in via Ethernet renders the wireless connection moot, except you would have to use a powerline adapter if Ethernet cabling isn’t near where the Tablo will be placed.

Once hooked up, Tablo’s app walked us through the step-by-step process to get the DVR up and running, and the process was seamless. It installed the latest firmware, scanned for all available channels, downloaded a grid to display what is airing on the captured channels, and includes a guide to see what’s playing on what channel and at what times.

Not much changed on the software side to go with the new hardware. The layout, navigation and settings are basically the same, and still largely driven by the subscription-based model governing the full breadth of features.

For $5.00 per month, $50 per year or $150 for life, the subscription enhances TV guide data with more artwork, better filtering, easier recording, and remote access to live TV and recorded shows away from home. The remote access is formally called Tablo Connect, and works by place-shifting the content, but it does require a good upload speed at home, as well as good download speed wherever you’re trying to access it from.

The Tablo Dual OTA DVR still does its thing without a subscription, allowing you to manually set recordings and view a guide, albeit without the artwork, improved filtering, or remote viewing.

Upon closer inspection of the settings, we realized that Nuvyyo’s stated 40 hours of recording was based on a lower default setting — 720p resolution at 30fps (frames per second). When we raised that to 1080i at 30fps or 60fps with a higher quality setting, the 64GB of storage was cut down to no more than 20 hours of recorded content.

Nuvyyo maintains a fairly broad swath of support for the Tablo.

Nuvyyo maintains a fairly broad swath of support for the Tablo.

This confirmed our suspicions that external storage was required for even something as simple as recording all the episodes of a single show’s current or upcoming season. With up to 8TB supported, there’s plenty of room and flexibility as to what size we went with, but long-term use requires empty space.

Nuvyyo has yet to bring in a more refined method to managing storage. The Tablo will overwrite older unprotected content when it runs out of space, but outside of that, deleting shows does require going in and plucking them out on your own.

Recording processes are also still very similar. We could choose to record new episodes for a particular show and its current season, and even avoid re-runs, but it would still record an episode we already had if it came from a different channel. It’s the difference between recording from a specific channel or choosing a specific show. Cleaning this feature up would help avoid overrunning storage.

Being a dual-tuner device, the Dual OTA DVR can record one show while streaming another, or record two shows at once. That’s the same as the original as well, only the one USB port means there’s no way to stack a second external drive like you could with the previous model.

These gripes are somewhat minor in the grander scheme, but they stand out because the sum of the parts still function so well. Streaming live TV that comes into the home for free is exactly what any cord-cutter would want, and there’s nothing illegal going on here. Tablo Connect’s place-shifting model essentially does the same thing any cloud-based DVR or streaming service has been doing for years.

Nuvyyo offers a full one-year manufacturer’s warranty for repair or replacement for the Tablo Dual OTA DVR. If purchased directly from Nuvyyo’s website, you can return the device up to 30 days after the purchase, but you’re on the hook for shipping costs.

Despite maintaining the Tablo’s pedigree for outstanding live TV streaming and recording, the Dual OTA DVR isn’t a leap forward from its predecessor. It would be one thing if they squeezed in a 500GB or 1TB drive inside, but the included 64GB storage will do little for most enthusiasts looking for such a product. We figure most will need an external hard drive to make this viable longer-term.

The device itself is $250, and with a lifetime subscription, the price is up to $400. The subscription is tied to an account rather than a Tablo, so upgrading hardware along the line doesn’t affect signing up for life.

There isn’t much on the market to compete with what Tablo does anymore, but that’s not to say there aren’t others doing the same thing.

The TiVo Bolt comes in two different iterations, one with 500GB and another with 1TB , for $170 and $300, respectively. SiliconDust’s HDHomeRun Connect has been out for a while too, and is still available from a number of vendors.

Networks have threatened to cease OTA broadcasts in the past, but the lights are still on, so it doesn’t look like anyone is pulling the plug just yet. The eventual release of ATSC (Advanced Television Systems Committee) 3.0 will pull OTA broadcasts into the 4K era, but that’s still some time away.

If you already have the original mode, there is nothing here to spur an upgrade. The new Tablo Dual OTA DVR doesn’t have enough under the hood to stand out, and the software experience applies equally to both anyway. If you don’t have one, however, go with the Tablo Dual OTA DVR and buy an external drive to get the most out of the smaller, quieter design for easier placement. Also, if 20-64GB is enough of a storage range, then this is the OTA DVR for you.

Update: Since this review was published, Simple.TV announced that it was shutting down all operations. Its devices and DVR service will no longer work.