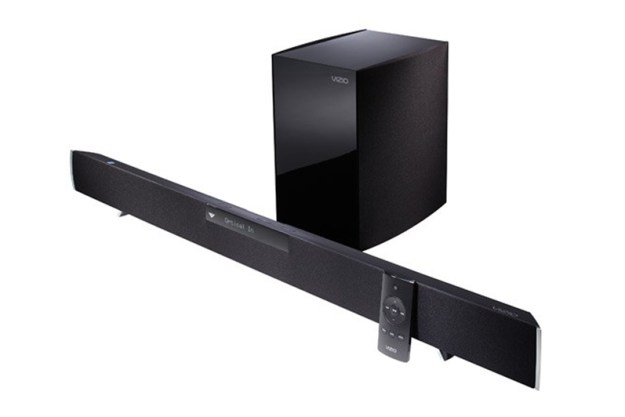 “Provides a listening experience that comes dangerously close to some of the $500 sound bar systems we’ve tested this year.”

As if pulling the trigger on a new TV purchase during the holidays wasn’t difficult enough already, the state of affairs in TV adds a new complication for shoppers this year: By and large, built-in TV speakers sound terrible.

We might rush to blame the TV manufacturers for going cheap on us, but that isn’t really the issue. The problem is that we love thin TVs. We like thin bezels, thin profiles and thin prices. And since those factors have become a priority for TV makers, audio quality has necessarily taken a back seat – actually, it might be more appropriate to say it has been stuffed in the trunk. There’s just no room for the kind of quality speakers necessary to make TVs sound bigger than they actually are.

So the sound bar has become an extremely popular — and some would say, necessary – add-on purchase when shopping for a TV. You don’t want a space-hogging multi-channel surround system (you’re buying a thin TV because it takes up less space!) but you shouldn’t have to deal with sound so bad it sours your experience with your gorgeous new display. But you also spent a fair amount of time seeking out the best deal on that new TV, so what’s the point in dropping another $400 on a speaker system

The good news is: this year, you don’t have to. Vizio just announced a new line-up of sound bar solutions priced to sell for the holidays. For as little as $100 and no more than $230, you can pick up a sleek Vizio sound bar, with the option of adding a wireless subwoofer, to enhance your TV-watching experience. We wondered, though: Can such inexpensive sound bars deliver impressive enough sound, or should you just accept that you will need to spend more? We evaluated the VIZIO SB4021M with the aim of answering that very question. Here’s what we learned.

We’ve seen some wasteful and flat-out silly sound bar/subwoofer packaging this year, and have called those responsible out for it. So, it is only fair that we take a moment to give a nod to Vizio for putting forth some effort toward waste reduction by cleverly packaging its sound bar/wireless subwoofer combinations in a single, easy-to-handle box. We had no problem toting the combo around with a single hand and were impressed that Vizio didn’t waste a single square inch in its packaging. Smart.

Vizio has introduced four new sound bar SKUs, but what we’re really dealing with are two very slightly different sound bars, each with or without a wireless sub. This review is of the M-series SB4021M sound bar with wireless subwoofer, but we believe it will helpful in gauging the quality of all available models.

Since the sound bar is so lightweight, mounting it to a wall requires minimal work. All you’ll need to pick up are four small, plastic drywall anchors. The remaining hardware needed for installation is in the box, including a mounting template, mounting brackets and screws

Included in the box with the sound bar and wireless subwoofer are a remote control (battery pre-installed) power adapter for the sound bar, a 3.5 mm-to-stereo RCA audio cable, and some product literature. Note that no digital optical cable is provided, so you’ll want to pick one up separately.

The SB4021M sound bar produces sound using two 2.75-inch, full-range drivers. No details on amplifier power are disclosed by Vizio. The two speakers are separated by as much space as the 40-inch wide cabinet will allow, which should ensure decent stereo separation. Inputs on the sound bar include optical digital, coaxial digital, 3.55 mm analog and USB, all of which are located on the rear of the bar.

The subwoofer uses a 6.5-inch driver and is ported to the rear. Like the sound bar, its power rating is a mystery. The sub’s power cord is hardwired to the sub’s cabinet and stretches just over 6 feet, which should make it easy enough to place in most rooms. The wireless range for the sub is listed at up to 60 feet (provided line of sight is maintained), which should be more than enough for most folks.

The front of the M-series sound bar is adorned with an LED display window, which allows for easy adjustment of bass, treble, volume, SRS TruSurround , SRS TruVolume and display brightness settings. There are a few control buttons located just above this display, but most functions must be accessed using the system’s provided remote control.

SRS TruSurround is a sort of virtual surround sound, while SRS TruVolume is a volume limiter, which should keep those over-juiced infomercials from blowing you out of your seat when they interrupt your programming.

We also want to make special mention of Vizio’s inclusion of a USB input. For those that want to whip up a quick playlist and slap it on a USB thumb drive, the ability to connect it directly to the sound bar is a nice bonus. This keeps the user’s mobile devices untethered while providing an alternate custom music playback option. Since more expensive sound bars offer wireless streaming options, it was wise of Vizio to come up with an affordable alternative.

The beauty of a sound bar is that very little setup is required. For most folks, setup will involve connecting a single cable from a TV to the sound bar. The digital optical connection is, by far, the most popular for audio output among TV manufacturers today. For those with older TVs or A/V receivers, Vizio does provide a cable for tapping analog audio outputs.

Setup of the subwoofer required no action on our part. We plugged it in and it was already synced up. Should the user experience any syncing issues, pressing a button on the back of the sub will prompt the sub to reconnect.

For our evaluation, we connected the SB4021M to a Vizio 37-inch LCD TV via digital optical cable, to an iPhone 4S via 3.5 mm stereo cable and to a USB thumb drive loaded with high-quality MP3 audio tracks.

If readers take nothing else away from this review, they should note that the SB4021M benefits a great deal from even a modest amount of break-in time. Out of the box, the SB4021M sound bar seems to have an upper midrange-intensive focus that, for lack of a better term, is grating to the ear. It doesn’t take a trained listener to hear it, either, which is why we’re making such a big deal out of it. Give the sound bar a good 10 hours of play time, however, and the sound balances out somewhat – enough to calm down that grating upper-midrange hump, anyway.

After some break-in time, we put the SB4021M system to task playing music. We know that this system wasn’t designed to play music, but we also know from experience that if it can pull music off well, that’s a good sign of overall sonic quality.

The SB4021M’s music performance didn’t blow us away, but we must concede that it was far better than we expected from such an inexpensive system. Treble response was actually very pleasant – we never felt as if the sound bar grew exceedingly bright or strident. Midrange performance was ok – we would have liked to hear fuller vocal reproduction for music. Bass output, with the subwoofer involved, was surprisingly good. Without the subwoofer, we were left wanting more, but we say this because once you hear the system with the subwoofer, you won’t want to go without — more on that in a moment.

We then switched gears and watched TV with the sound bar only, later folding the subwoofer back in. How good the SB4021M’s sound bar would sound depended greatly the source material. Low-quality audio sources weren’t made to sound any better with the system. In fact, the higher-performance capabilities of the sound bar speaker only served to expose the contents limitations. Yet, with higher-quality TV shows, it was immediately apparent that the SB4021M was far superior to the speakers built into our TV (a model with speakers that already perform well above the standard achieved by today’s TVs) even without the subwoofer integrated. Once we kicked the subwoofer back in, our TV-watching experience was totally transformed, bringing the content to life in a way no conventional TV’s built-in audio can

It was with movie playback that the SB4021M really shone, though we found that the subwoofer simply wasn’t optional anymore. The high-quality Dolby Digital soundtracks that we played through the system begged for deep bass production and the sound bar in this system simply can’t handle that visceral low end we needed to hear without the sub involved. With the sub in action, movies were a blast to watch. The sub’s performance well exceeds its $100 price point, offering relatively accurate, tuneful bass with plenty of palpable, wall-shaking rumble. And, when placed well in the room, we didn’t have any problems with localization or boominess. Place it too close to a corner, however, and you are likely to hear plenty of chuffing from the sub’s port

Finally, we should mention how impressed we were by just how loud this system can get without becoming distorted. Trust us when we say it can play louder than you need it to. Stereo separation was also impressive.

The subwoofer is necessary to keep things balanced, though. While the sound bar is a good value on its own, we think it would be a shame for anyone to go without the sub. Do yourself a favor and get one of the two systems that include the wireless sub. You’ll be glad you did.

We have very little to complain about with this low-priced system, but, as always, there is some room for improvement. We were annoyed that adjusting the bass level on the sound bar did nothing for the bass output of the sound bar itself; it would seem adjusting the bass effects the subwoofer only. Also, we doubt many folks would have much use for the included stereo RCA cable. An inexpensive, 6 -foot digital optical cable would be of much greater use to most folks, and would arguably reduce returns as well.

We never had any doubts that Vizio’s latest audio solutions would be appealing from a value standpoint. What was at question was whether or not these sound bars would sound good enough to keep folks from feeling urged to spend a little more in hopes for better sound quality. Having spent some quality time with the system, we have to say yes, it can

The average listener will be very satisfied with a SB4021M purchase. The system sounds exponentially better than the audio any of today’s slim TV’s can offer on their own and provides a listening experience that comes dangerously close to some of the $500 systems we’ve tested this year. For those looking for big sound with minimal hassle and at a modicum of expense, the SB4021M is nearly impossible to beat.