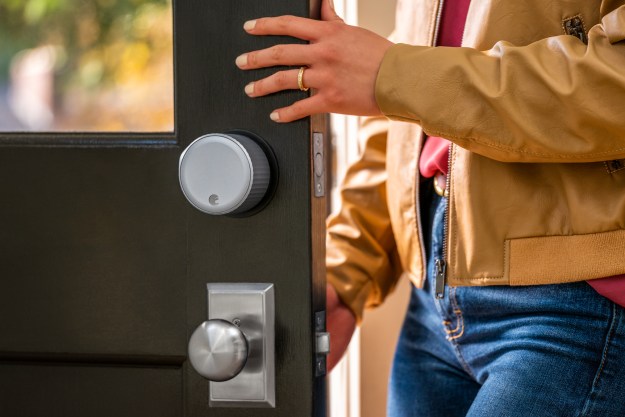 “It may look like a sweet snack, but this lock gives you real security and great features.”

If installing a smart lock intimidates you, then the August Wi-Fi Smart Lock ($250) is a good choice. All you need is a screwdriver and five minutes. People say things are foolproof all the time, but in this case, it really is. Plus, August Wi-Fi has a lot of handy features. Here’s everything you need to know about this simple, easy-to-use smart lock.

Installing the August Wi-Fi Smart Lock, like I mentioned, is super easy. In fact, it is the easiest smart lock I’ve ever installed. There are two reasons why.

First, the app gives you step-by-step instructions with short videos instead of just pictures, so you really can’t mess up. Second, the August Wi-Fi Smart Lock doesn’t replace your current deadbolt like the third-generation August Smart Lock does.

You just remove the thumb turn on the inside of the door with the smart lock. It took me about five minutes to install, and then connecting it to the app and calibrating the lock took maybe at most three more minutes.

The August Wi-Fi Smart Lock is the little brother of the August Smart Lock Pro. It is 45% smaller in volume and 20% slimmer, making it a sleek little lock about the size of a snack cake and comes in either silver or matte black plastic. The August Wi-Fi sticks out from the door quite a bit, but that really didn’t bother me.

What did concern me a bit is that my deadbolt is gold. That means my lock is now gold on one side and silver on the other. I can see where replacing the whole thing, the deadbolt included, can be a good idea. Those types of locks aren’t as easy to install, but they look more polished and cohesive.

The August app is very intuitive and wonderfully glitch-free. Its features are very similar to most other smart locks on the market. You can unlock the August from anywhere and check the activity log to monitor who’s coming and going in your home. You can also give friends and family virtual keys that can be used to unlock the door.

These virtual keys can be set to work all the time or on a set schedule. You can also give out temporary keys that expire whenever you want. If you like, you have the option to receive alerts on your phone whenever certain people access the lock in addition to the activity log. This means you have ultimate control over who has access to your home.

When it senses you, August Wi-Fi will unlock as you approach and lock the door as you move away.

The August Wi-Fi Smart Lock also has a feature called Auto-Lock and Auto-Unlock. You can use the app to set up the lock so that it will detect your phone or Apple watch as you come and go through the door. When August Wi-Fi senses your device, it will unlock as you approach and lock the door as you move away.

Through the app, you can set up the lock to wait for up to 30 minutes before auto-locking, which is a good option if you have other family members leaving the house at the same time. I love this feature because I hate pulling out my keys or my phone to mess with locks. I usually have my hands full already. Auto-Lock isn’t a feature exclusive to August, though. The Wyze Lock and the Danalock V3, for example, have a similar feature.

The August Wi-Fi Smart Lock has a device that comes with it called DoorSense. This is a small, pill-shaped sensor that you attach to the door frame. With it, the app can tell you whether your door is open or shut. If you have a kid, a spouse, or a roommate that forgets to close the door, this can be handy.

Another thing that I really like is that the August Wi-Fi Smart Lock doesn’t need anything other than the small DoorSense sensor to operate. This isn’t always the case when it comes to smart locks.

No bridge frees up my outlets for other smart devices.

For instance, the Wyze Lock needs the Wyze Lock Gateway plugged into an outlet nearby to work properly and the August Smart Lock Pro + Connect needs the August Wi-Fi Bridge to function. No bridge frees up my outlets for other smart devices.

It’s scary to automate your home sometimes because getting hacked is always a concern. August has a few ways to protect you. First, the app has two-step verification to prevent unauthorized users from accessing your account. Second, uses both Bluetooth Low Energy (BLE) technology encryption and TLS to help keep your data safe.

Afraid you’ll lose your phone and anyone who finds it will have access to your home? August has a great feature that allows you to disable the app and virtual keys by accessing its lost phone site. These features all indicate a higher urgency when it comes to security and privacy with the smart home.

No matter what type of voice assistant you use, you can control the August Wi-Fi. It is compatible with Alexa, Google Assistant, and Siri. Voice commands can be used to unlock and check the status of your door. This is super helpful, particularly when I can’t find my phone to unlock the door from a distance.

Afraid that a random person can perhaps open your door by asking your smart speaker through the window? Don’t worry, because it still requires a four-digit code in order to open. Small details such as this again shows that the company takes security seriously. You can also connect the August Wi-Fi with various hubs and services. It is compatible with Airbnb, Samsung SmartThings, SimpliSafe, and Apple HomeKit, among others.

The only thing I really didn’t like about the August Wi-Fi is its power source. It runs on two CR123 batteries. Chances are, you’re like me and have nothing else in your home that also uses this type of battery. That means you can’t just grab a couple of fresh batteries out of the junk drawer when they die. You’ll have to buy a special backup set to keep on hand.

It’s a small issue I suppose, but I’m sure to forget to buy new batteries specifically for my lock. I really wish it had a rechargeable battery like the Friday Lock from Friday Labs. Knowing that, the battery is rated for three to six months under normal operating conditions.

The August Wi-Fi Smart Lock is a solid choice when it comes to a fast, easy way to automate your door locks. It has all of the features you would expect from an advanced smart lock, like virtual keys and entry alerts. It is priced on the higher end, but for the ease-of-use, quality app, sturdy build, and mix of great features you find in top-of-the-line locks, I think it’s worth it.

Well, it all depends on what you want. If you’d rather have a smart lock with a keypad, the Nest X Yale Lock is a better choice, for example. If you want a lock that has all of the standard features you find on most other advanced smart locks without changing out your deadbolt, the August Wi-Fi is a good choice. Another option is the Level Lock, which is similarly priced but doesn’t replace your existing thumb turn — so it doesn’t change the look of your door. However, it’s not as features packed as this one.

The August Wi-Fi seems to be well built and sturdy. Even though the case is plastic, the parts that attach to your door are made of thick metal, so I think it will last, no matter how many times you bump it. It also has a 30-day money-back guarantee and a one-year limited warranty.

Yes. It’s a great little lock with a strong emphasis on privacy and security.