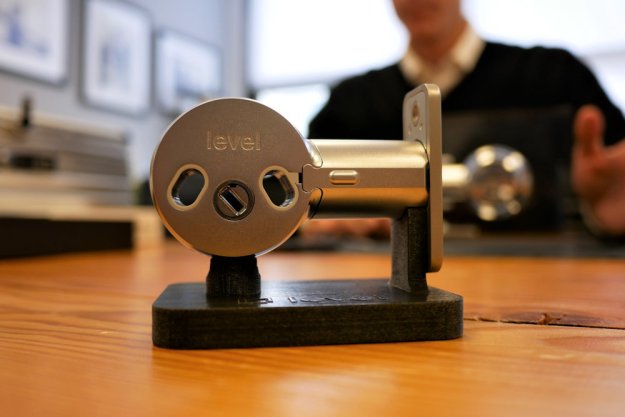 “An engineering marvel that tucks away all the components of a smart lock.”

Smart locks have become sophisticated, with some high-end models boasting fingerprint unlock, shared access codes, anti-jam protection, and other innovative features. While they all strive to provide homeowners with convenience and security, they have something else in common. An unmistakable design. You know it’s a smart lock because of obvious tells, like a keypad. Smart locks come in all options and configurations, so choosing the right one is a matter of understanding what suits your needs the best.

This can inadvertently make them targets, especially for some crafty hackers with a nefarious agenda. Who wants to come home to find their smart lock compromised, right? Going against this trend, the Level Lock bills itself as the invisible smart lock, but more importantly, it represents a drastic departure from what we’re used to getting in this space. It’s a smart lock like no other, one that takes pride in its minimalist design above anything else.

Not surprisingly, though, the company announced two additions to its lineup — the Level Touch and new Level Lock. The former which takes the same approach with its invisible design, but adds in some new touch options to unlock it. The new Level Touch is available for purchase online for $329. Meanwhile, the new Level Lock has been shrunken down in size to be classified as the company’s smallest smart lock ever.

Complete install in under 10 minutes

The beauty of the Level Lock is its quick and simple installation, which took me no more than 10 minutes to complete. From start to finish, the process is far more streamlined than any other smart lock installation I’ve done. All that’s required is to replace the deadbolt, attach the new motor, and then fasten the lock housing all into place.

All of the components are tucked away and hidden from view, giving my door the same look and finish as before — something I can’t say about other smart locks. How is it powered? There’s a single CR2 battery that discreetly fits inside of the deadbolt, which allows the six-stage, stainless steel gearbox to operate. While uncommon, the CR2 battery is rated to last upwards of a year with ‘normal’ use. So far, it has lasted me two months, but there’s no indication in the app as to how much juice is left.

The best part about the Level Lock is that you can’t tell it’s a smart lock by just looking at the door, so it won’t give anyone much reason to try and mess with it. You’re still using most of the original components of your existing lock, like the turn knob, lock cylinder, and keys.

Unlike its contemporaries, the Level Lock pales in comparison when it comes to features, especially when you factor in its $229 price tag. It works just like any other smart lock, in that you can lock/unlock it using a smartphone. As for the rest? There’s the auto-lock feature that’ll lock my door within a designated period of time after I head out. It’s useful if you’re in a rush, but even its longest setting (1 minute) is pretty short — so it would be nice to have longer options.

All of the components are tucked away and hidden from view.

Homeowners will appreciate Level Lock’s shared access through an invitation. This is useful if you plan on being away and need a friend, neighbor, or family member to check up on your place — or if you happen to offer your home on Airbnb. You can either provide them with admin or guest privileges, with the ability to set specific dates and times for them access to the lock.

Apple users are given an extra incentive, as the Level Lock supports HomeKit, giving owners of the iPhone or Apple Watch the ability to lock/unlock by asking Siri to do it. It is a bummer that there’s no support for Amazon Alexa and Google Assistant. I reached out to Level and while there are plans to expand to other platforms in the future, there are no specifics at the moment.

These features so far are pretty standard among today’s smart locks, and a glaring omission is one that would notify me in the event my door is left ajar. In all the instances I kept it open purposely, the auto-lock feature kicks in and initiates the locking process — even though the door is open. I would expect a smart lock to be smart enough to determine if a door is actually closed or not, but that doesn’t happen here. Notifications are sent to me in the event that the lock is jammed and cannot fully lock.

As I mentioned above, Level is able to achieve a minimalist design by hollowing out the deadbolt to double as the battery compartment. In doing this, it does bring up the matter of the lock’s integrity. I haven’t tried kicking down my door yet to test it out, but Level assures that it’s been engineered from the ground up for strength and durability. The company is even bold enough to claim that it exceeds the highest industry standards, and has been stress-tested over 1,000,000 cycles to maintain structural and operational form.

The Level Lock may not seem all that different from its competitors based on its list of features, but it sets an engineering benchmark in design. That alone makes it disruptive and innovative for those who don’t want to dramatically change the aesthetics of their door.

For the price? Yes! The Level Lock is expensive at $229. In the same price range, the $300 Lockly Secure Pro offers an extensive suite of features, such as fingerprint unlock and a digital keypad for access, for a little more. And for just a smidgen more, Lockly recently came out with the Vision — a $400 priced lock that has everything in the Secure Pro, but also adds in a video doorbell camera.

Another one to consider is the August Wi-Fi Smart Lock, which at $250, offers a complete experience that supports Google Assistant, Amazon Alexa, and Apple’s HomeKit.

Conversely, there’s the $100 Wyze Lock on the other end of the spectrum. You’re spending much less for the same features as the Level Lock.

There’s a two-year limited warranty that covers defects in materials and workmanship under normal use.

Yes. The Level Lock is hidden inside of your door — there’s no keypad outside your door that makes it blatantly obvious it’s a smart lock.