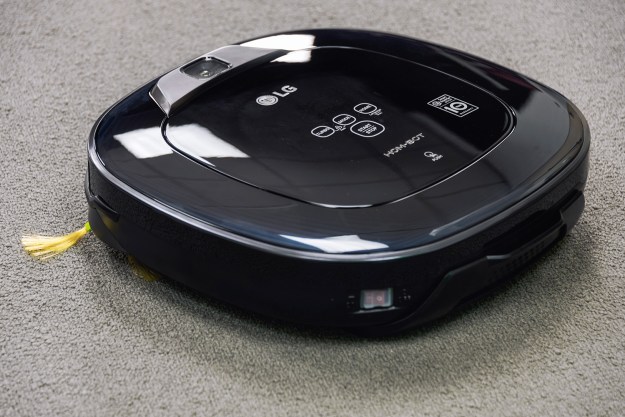 “The LG Hom-Bot is one of the quietest robot vacuums we’ve ever seen – but does it suck?”

Robot vacuums have come a long way since the set-it-and-forget-it (then come back to find it trapped under a bookshelf) days. Once they used to just sweep the room in a single, seemingly random pattern.

In 2013, LG came out with its Hom-Bot, a vac that lets you choose from a variety of cleaning modes. Three years and a $100 price increase later, LG has a new version of the Hom-Bot that looks and acts much the same. But has this robot learned anything new?

Can you just open the box and start vacuuming? Maybe. Ours actually came with a single bar of juice remaining, but we hooked up the home docking station and let its battery fully charge anyway. You will have to insert the dust bin or face a scolding by a robotic female voice: “Please check if the dust bin is installed with the filter.” This is actually nice, because otherwise the vac would probably spit the sucked-up gunk everywhere.

At 13.4 inches by 13.4 inches and 3.5 inches tall, the Hom-Bot is squarish and short, which means it’s less likely to get stuck under furniture than some other bot vacs we’ve tested. It has five touch buttons on its top (a start/stop button, one for turning on the turbo setting, one to pick the cleaning mode, one for sending the bot home, and one to flip open the lid for bin access), as well as a display that shows the time, the mode it’s in, the battery level, and whether or not it’s in turbo.

The surface is extremely prone to fingerprints, so keep than in mind if you care about keeping your cleaning machine pristine. The bin is very easy to remove: Just pull up on the green handle and it lifts out easily. There’s a button to press to lift the bin’s lid, but sometimes gross, dusty bits came falling out of the side of the bin if the flap wasn’t properly closed.

Underneath, there are a pair of side brushes that spin around to sweep Cheerios (or what have you) in front of the suction. There’s also a roller brush for picking up things like cat hair. Two wheels, the charging terminals, and the cliff detection and lower camera sensors are here, too. You can remove the roller brush easily, which is important, as it can get pretty furry.

While the remote is fairly intuitive, there are some buttons (like the hilariously named “my space”) that aren’t exactly easy to figure out without going to the manual. The bot is effortless to control with the directional buttons, though sometimes I found it spinning the opposite way I’d intended until I got the hang of it. If you’re anything like me, you’ll be paranoid about losing the remote.

While it’s necessary to drive around the bot, you can still make use of most features without the remote. There’s also a convenient little slot for it on the home station.

The vacuum comes with some accessories as well. It has a “mop plate” that you can slot into the bottom of the vacuum. Despite the name, it’s actually a microfiber cloth (included) connected to the plate with hook-and-eye closure material that lets you do a dry clean of uncarpeted floors. There are a couple brushes that help you keep your vacuum clean, including one that smartly snaps into the dust bin’s lid, so it’s always on hand.

There’s a lot to like about the Hom-Bot’s performance. For one thing, it’s one of the quietest robot vacuums we’ve ever tested. It also moves quite gracefully, speeding along until approaches an obstacle; then it slows down and edges around it. Even if you’re in the driver’s seat, the Hom-Bot won’t let you smash into the wall: It does a little shimmy backwards in protest.

In addition to manual control, there are four other cleaning modes: Zigzag is the traditional back and forth movement; cell-by-cell divides the room into quadrants, cleans the outside of each, then does zigzag mode inside the outlines; my space lets you draw a rectangle (smaller than 3 ¼ feet) using manual mode, then the bot will vacuum inside those parameters; spiral or spot cleaning takes about five minutes and circles out and back from the starting point, cleaning an area about 4 ½ feet in diameter. Each has varying degrees of success, with cell-by-cell being the most thorough. My space mode could occasionally miss an entire corner of its rectangle.

Spiral mode was far more effective than when we used manual mode to drive the vacuum to a mess. After a minute, 87 percent of our test load of oats were in the dust bin using spiral mode, compared to just 64 percent using the remote. In every instance, using the turbo boost was far more effective: For example, the turbo feature made manual cleaning about 30 percent more effective at picking up rice on carpet than without the boost turned on. That made it more on par with other robot vacuums we’ve tested, so you’ll probably want to leave it in turbo all the time.

One DT staffer told me his neighbors joke about their robot vacuum: They got it to save time but now end up having to babysit it whenever it runs. They do have a tendency to get stuck, and the Hom-Bot was no exception. It kept trying to climb the stand of my floor lamp, but fortunately that didn’t slow it down. Once it entangled itself in the snake pit (that’s my name for the jumble of cords for near my entertainment center) — it did extract itself and seemed to just avoid that area afterwards. That meant it didn’t drag my Roku around a second time, but it also missed a few spots. The whole cell-by-cell process took 28 minutes in a 15-by-9-foot living room, and there was enough space left in the 0.6-liter dust bin to tackle the dining room and hallway.

Driving the robot around to clean your floor is fun if not terribly effective.

Ultimately, the Hom-Bot didn’t really live up to its name: Several times it just gave up and stopped in the middle of the floor after signaling that it was done cleaning and planned to head home for charging. Quite often the bot got something stuck in its wheels (my own fault, I suppose, as the floor was a mess of booby traps for the vacuum’s roller brush). It only sounds its “help me” alert once, which is preferable to the insistent beeping I’ve seen with some robot vacuum’s error messages. (Just ask my harassed cat.) The bot’s microfiber cloth is easy to snap into place and does help pick up crumbs and dirt, but it definitely doesn’t replace a mop.

With its low profile, soft purr of a motor, variety of cleaning modes, and super-fun remote control, the LG Hom-Bot is definitely a nice vacuum. It seemed to have some great navigation features and rarely got stuck as it zoomed around different rooms. However, its Magellan-like directional abilities seemed to desert it on occasion when it was time to head for its charging station.

The cleaning performance left something to be desired too, unless it was on its turbo setting. This drains the battery faster, but it does a good job of handling dust, debris, and cat hair. Still, its turbo cleaning ability doesn’t put it over and above some of its less-expensive rivals.

Best cordless vacuum deals for May 2022