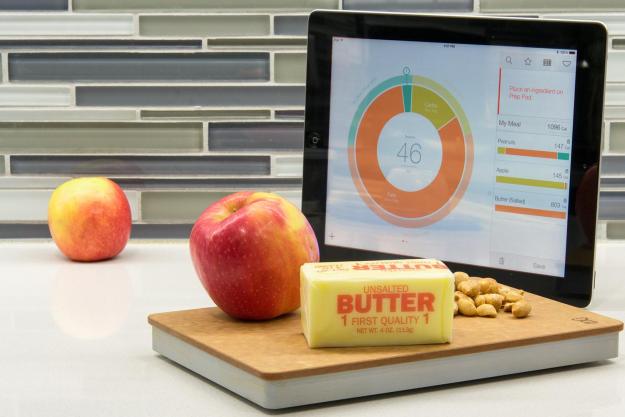 “The Orange Chef Prep Pad gives a complete nutritional picture of every meal, but the app has some aggravations that gave us hunger pangs.”

How many calories were in that salad you had for lunch? What about fiber? Sugar? Protein? Orange Chef’s Prep Pad is a smart scale designed to help you keep tabs on just how balanced your diet is.

The Original Kitchen iPad Rack ($36)
Keep your iPad off your messy counter with this handy stand.

BoxWave EverTouch Capacitive iPad Stylus ($7.50)
Instead of smearing your iPad with foodstuffs, use a stylus.

As we recently learned, the Healbe GoBe Body Manager can technically do this automatically, but it’s not quite ready for primetime yet. We need another way. While there are lots of apps and fitness trackers to help you keep a log of what you’re eating, including all the nutrition information, it’s hard to know exactly how much you’re eating. Unless it comes prepackaged with all the nutritional information on the label, guessing the calorie count of something as simple as a banana is hard. After all, bananas come in all different sizes. And people are notoriously bad at estimating the calorie count of more complex meals; they almost always think that cheeseburger is healthier than it really is.

This is where the Prep Pad comes in. The smart scale uses Bluetooth Smart to connect to your iPad (3 or later). The accompanying Countertop app (free) uses the weight of whatever you’ve placed on the Prep Pad and some input from you to calculate its nutritional information — everything from calories to protein, to carbohydrates, to minutiae such as vitamin A and potassium content.

The scale itself is attractive and portable. It was easy enough to tote the 9-inch by 6.25-inch by 0.75-inch device to and from the office every day. Most of our food fit just fine on the surface, but that’s because we pretty much did everything individually. Trying to fit a large bowl or plate probably wouldn’t have worked out.

We had a meta moment of weighing the scale on another scale; it’s just over two pounds. It has a unibody aluminum base and non-porous composite top that cleans up easily enough. Whenever you want to use the scale, you simply press its single button to connect it to your phone.

We found the scale to be extremely accurate and sensitive, weighing in a teaspoon of pepper at 0.11 ounces and syncing up with our other scales to within 0.04 ounces. That said, you need your iPhone or iPad to take advantage of that accuracy, as the scale itself doesn’t have a display.

The scale itself is attractive and portable.

When you fire up the scale and open the Countertop app, it first asks you a lot of intimate questions: birthday, gender, weight, height, weight goal, and activity level. The next screen asks you to determine your preferred “meal balance.” You can leave the USDA recommendations — 50 percent carbs, 30 percent fats, and 20 percent protein — as default or customize your own. Paleo dieters can even set their carb count to zero. These settings can all be altered again later, too.

A database of dishes

Once you’ve got everything set up and connected, you can start weighing your food. If you’re starting with a simple snack, like an apple you can set it on the scale, which will register the weight. Then you type “apple” into the database; in this case, a list of 25 options came up, including apples (without skin), Fuji apples, and Wal-Mart Granny Smith Apple. The app has a database of over 300,000 items, according to Orange Chef. If your snack has a barcode, you can scan that instead, though this didn’t always help. Using an iPhone to scan our way through the Digital Trends fridge, we encountered lots of food that couldn’t be found in the database. Adding an item wasn’t too cumbersome, but because you could only enter a serving size in grams, it was a bit frustrating when it came to items with measurements in milliliters, for example.

Once you have the weight and identification of the food, the donut-shaped graph fills in with the carb, fat, and protein information. Based on the parameters you set for these earlier, you’ll get a score, out of 100, for how balanced the meal is. That means an apple will look a lot different to someone on a low-carb diet than for someone following the USDA suggestions.

If you’re trying to be more mindful of what you’re eating, the Prep Pad is a good wakeup call.

If you’re interested in the overall balance of a full meal, you just keep swapping out the ingredients and adding them to your meal. The graph will update with each addition. You can tap on the graph and get a more in-depth view of each item, so that the fiber and sugar data will appear, giving you an easy-to-understand visual representation of that balance. Once all your items are added, you hit save and begin the process of cataloguing the meal.

You first have the option of snapping a picture; then you can name it (a good idea, as it can be difficult to identify meals later); label it as breakfast, lunch, dinner, or snack; and choose the number of servings in the dish. If you’re one of those people who like to show off their food, you can instantly share it to Facebook, Twitter, or Pinterest (no Instagram!). You can also save it to Endnote or email it. It’s a nice feature for those who are trying to keep themselves accountable.

In a separate screen, you can see the nutritional information for the day; a bar graph shows you the number of calories consumed, and then it lists the number of calories in your goal and by how much you’re over or under that number. It does the same with carbs, protein, fats, vitamins A and C, and more. The weekly view gives you the average values for those categories. This breakdown view is only available on the iPad version of the app.

What’s app with that?

Because the scale was accurate, the quirks with the Prep Pad all seem to be in the Countertop app. It was a bit buggy on the iPad and nearly unusable on the iPhone. While very light measurements would show up fine in the iPad, when we tried measuring a single slice of cheese, nothing registered on the iPhone version. Trying to select gender, height, weight, and the other initial registration items on the settings page was impossible on the iPhone, but there was no problem on the iPad.

There were other problems that were just with the app itself. Since it was a bit awkward to whip out the scale at restaurants, I had to fake the bowl of Tom Yum soup I’d eaten later. It’s a good thing I did it that night, because the app won’t let me go back and add meals to previous days. Similarly, when I didn’t eat my whole sandwich, I couldn’t go back and reweigh the leftover half and subtract it. However, it was very easy to go back to my list of meals and click “Add to my meal” when I had the leftovers later. There was a similar problem with its inability to subtract the weight of a container after it was empty. If I wanted to zero out a coffee mug, I had to lug the scale to the machine, weigh it, and then add the coffee. The barcode scanner was hit or miss sometimes, and it never picked up something shiny, like a soda can.

If you’re trying to be more mindful of what you’re eating, the Prep Pad is a good wakeup call. The nutritional breakdown of food items was easy to grasp with the hollow pie chart, and it definitely made us rethink some of our food choices.

Despite the barcode scanner and database of pre-packaged foods, it seems the device is more at home in a kitchen and made for learning the calorie, carb, and protein content of your favorite recipes. When a friend made cupcakes or I bought a smoothie from a restaurant, it was impossible to suss out the weight of individual ingredients and get a truly accurate picture of what I was eating. The database smoothie, for example, didn’t include an option for one with peanut butter, which really changes the nutritional makeup of the drink.

Hopefully the Orange Chef team is working on some upgrades and expansions to its Countertop app, as most of the problems with the Prep Pad seem to stem from its software.