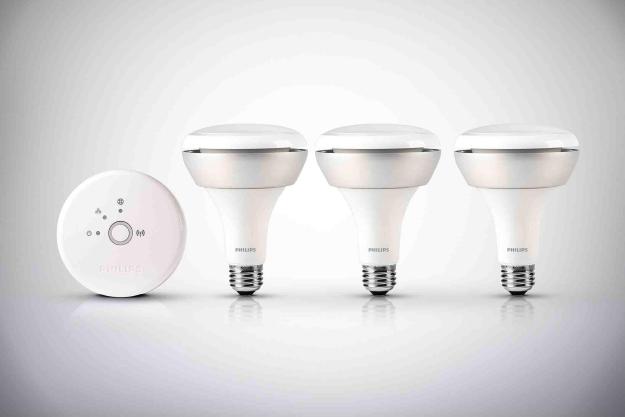 “Philips’ new BR30 downlights offer the same awesome features as the original A19 bulbs, yet they draw less power, and pump out more lumens per watt.”

Smart lighting is awesome. Having the ability to remotely control the color and brightness of your lights is one of the most useful (and fun) things you can have in your home. Ideally, every light in your house would be smart, web-connected, and capable of advanced automation, but there’s a problem that’s holding it back. The selection of smart lightbulbs currently available to consumers just isn’t as diverse yet as the ecosystem of regular incandescent bulbs, so replacing all your dumb bulbs with smart ones isn’t always possible at this point.

But Philips is hoping to change all that. As part of it’s continually-growing lineup of Hue bulbs, the company recently released its new BR30 downlamps. In contrast to the original Hue bulbs which were designed to mimic the omnidirectional shine of standard A-series bulbs,  The BR30’s are directional, and therefore better-suited for recessed light fixtures in ceilings or walls, since their light isn’t wasted.

The glow of the BR30 bulbs is much more concentrated.

Just like the original LED Hue bulbs, BR30s can pump out 630 lumens and produce colors contained in the full 2000-6500K temperature range. They also cost just as much as the original Hues and can do all the same tricks, so the only question that remains is whether or not they work as advertised. Do they really glow like Philips says they do? Are they better for ceiling fixtures, or only slightly different than the A-series bulbs? To find out, we put the BR30 to the test in a simple side-by-side comparison against the original Hue.

To run this test, we rigged up an extremely high-tech and elaborate contraption designed to gather quantitative data on the relative number of photons each bulb radiated onto a neutral 2-dimensional surface when held at maximum luminosity. In other words, we duct-taped a lamp to two chairs, pointed said lamp at a plain white wall from a fixed distance, and then took pictures to see how much the glow differed between the BR30 and A-series bulbs at their brightest setting. Here’s how it looked:

As you can see, the glow of the BR30 bulbs is much more concentrated than the regular A-series ones. In fact, the BR30 bulb is so directional that it didn’t even illuminate the lampshade it sat inside of, which proves beyond a doubt that these things are much better suited for ceiling fixtures than they are for lamps. They beam light in a much tighter pattern, but it’s not so tight that it can’t light up a large area.

Still, the addition of BR30 bulbs to the Hue lineup doesn’t mean you can have a smart bulb in every socket of your home, but it’s a big step in the right direction. As fas as we can tell, no other manufacturer makes such a wide range of smart bulb types as Philips, so if you’re considering installing some DIY smart lighting in your space, we highly recommend you go Hue or go home.

We can’t be sure, but based on the frequency of Hue updates and new additions to the family, we’re willing to bet that Philips isn’t stopping with BR30’s. We’ll know more after CES in January, but we wouldn’t be surprised to see another new bulb type surface early next year.

Hue is sold exclusively through Apple, so you can pick up a set of BR30’s here, or just head to the nearest Apple Store to buy them. Single bulbs go for $60, whereas a set of three and a gateway hub will put you back $200. Find out more here.