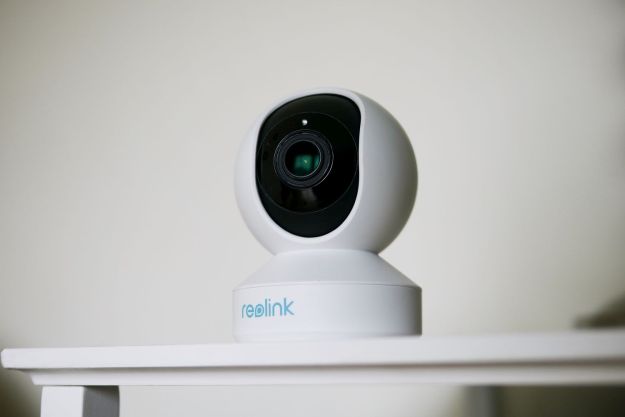 In the last few months, we’ve seen a steady stream of smart security cameras that can articulate to provide 360-degree coverage. They’re certainly useful, as the Eufy Security Indoor Cam 2K Pan and Tilt showed us — and it’s still the camera to beat at the moment.

The Reolink E1 Zoom is looking to dethrone it. The Reolink features a similar articulating camera with one peculiar feature you don’t see too often in an indoor camera: A zoom lens. It’s a rare extra, but is it a meaningful addition for a smart home security camera?

Full coverage with a helpful zoom

The Reolink E1 Zoom has a 5-megapixel Super HD camera paired with night vision, two-way audio, dual-band Wi-Fi, and a 3x optical zoom. At its widest, it covers a 98-degree horizontal field of view, which is substantially narrower than its contemporaries. Ring’s Indoor Cam, for example, has a wide 140-degree field of view. This would typically be a problem for other cams, but the E1 Zoom can pan on its base to cover 355-degrees on the horizontal.

Moving the camera gives users a degree of flexibility to peek around a room, but it’s a manual process. Unlike the Eufy Indoor Cam 2K Pan and Tilt, the E1 Zoom remains stationary, so it doesn’t automatically move to track motion, people, or pets.

However, the 3x optical zoom gives the added benefit of sharper details, versus relying on just a digital zoom. The difference is noticeable, as some details are more distinguishable with the optical zoom. Then again, zooming is often slow and delayed, as is focusing.

That’s a problem compounded by the fact that everything requires manual operation. It would’ve been far more useful if the E1 Zoom could rotate, zoom, and focus all on its own whenever it detects motion.

This camera shoots video at a resolution of 2560 x 1920, and the resulting quality is average at best. It produces clear video when there’s ample lighting, but highlights tend to suffer by appearing overexposed and washed out. Improper exposure can obscure details, which is never a good trait in a security camera.

Night vision works well enough, however, and is easily able to illuminate the entire 25 feet range of my living room (its rated for 40 feet of range). Even when it’s completely dark, the black-and-white night vision footage is crisp and clear.

The black-and-white night vision footage is crisp and clear.

The internal speaker is powerful, and at times a bit harsh and shrill with its tone. Unfortunately, the internal microphone does a terrible job at picking up audio, making a two-way conversation through it a chore. When speaking in a normal tone at approximately 10 feet away, it’s hard for the person using the camera to make out the conversation.

A lot of management required

The Reolink E1 Zoom seems like a competent security camera on paper, but it’s lacking the advanced security and tracking features of its peers, such as person detection or automatic tracking. You can create motion zones and adjust motion detection sensitivity, but there’s still a lot of management required.

Notifications come in through the app and triggered events are arranged in a linear timeline view in the app. After setting the motion sensitivity to the middle setting, the Reolink E1 Zoom still picks up just about any motion in its view. And you know what? It gets a bit redundant every time your cat or dog casually strolls by in the background.

You can create motion zones and adjust motion detection sensitivity, but there’s a lot of management required.

The Reolink E1 Zoom could be a fantastic security camera, but frequent triggers and its inability to discern potential threats from false ones make it less practical for protecting your home. And lastly, there’s not as much of a privacy focus either, since it lacks 2-factor authentication with the app login and there’s no privacy mode whatsoever to disable the camera.

There’s potential in this camera, but it lacks the smarts, features, and performance that other smart security cameras offer. Its $72 price is tempting, but we’ve seen better cameras at roughly the same price point.

Compared to other cameras, the Reolink E1 Zoom is bulky. The all-plastic construction makes it feel brittle and hollow, so we’re not too confident that it would hold up after a nasty fall. If you’re worried about defects, it comes with a 2-year limited warranty.

You bet. The Eufy Security Indoor 2K Pan and Tilt remains the better buy due to its automatic tracking, impressive video quality, person detection, and lower cost of $52.

No. There are better options available at a lower price.