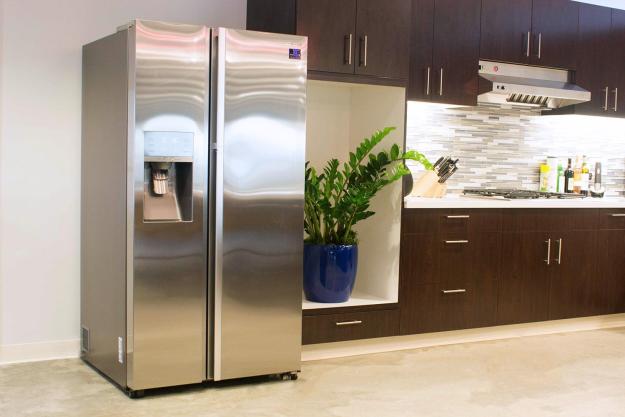 “Samsung's RH29H9000SR looks like a million bucks, but its feature set can't justify its price.”

Condiments are moved to and fro hundreds of times per week as the all-American trio of mustard, mayo and ketchup are called into action. To most people, this isn’t a problem, but to Samsung it’s inefficient and impractical. Air escapes every time the fridge door is opened, letting in a draft of efficiency-killing hot air.

The solution? Showcase, a second door that allows quick access to items in this fridge’s door shelf and better controls airflow. Though not unique to Samsung, the company is pushing this feature harder than its rivals in hopes its will nudge buyers in its direction.

And that nudge may be needed. The content-crammed RH29H9000SR is large, luxurious and pricey; the MSRP is a super-cool $2,999, but most retailers will part ways with it for “only” $2,699. Let’s see if this luxury refrigerator is really Samsung’s showcase – or just full of hot air.

The RH29H9000SR’s 28.5 cubic feet of interior capacity makes it one of the largest side-by-side refrigerators on the market. Like all fridges of its kind, though, this unit takes up a lot of room relative to its interior volume. This is due to the thick vertical interior wall that separates the freezer and refrigerator. Some buyers might like the massive, monolithic look this bestows, but it’s certainly not best way to use space.

Size aside, the RH29’s most interesting trait is undoubtedly the “showcase,” a trap door on the exterior of the refrigerator door that opens separately. Showcase provides quick access to items in the door shelves and reduces the amount of cool air that escapes with each quick trip.

There’s no doubt that showcase achieves its goal, as our thermometers showed the interior heats less rapidly when it is opened instead of the full refrigerator door, but the way showcase works can be confusing. Pulling the top third of the door’s handle opens the entire door, while the bottom two-thirds opens only the showcase. We found that many users naturally reached for the bottom even when they meant to open the entire refrigerator. While most people will eventually learn to reach a bit higher this design could be an issue for children and shorter adults.

The RH29’s freezer door includes a water and ice dispenser that can produce cubed or crushed ice. We like the simple dispensing system, which doesn’t require the use of buttons and looks quite elegant. Chilled water dispenses quickly, but ice isn’t quite as eager, and makes a racket.

Though large, the RH29’s interior is awkward because the fridge and freezer are deeper than they are wide (the freezer is the narrower of the two). You’ll often need to move items to access food lurking in the back of the fridge.

Showcase is the quickest way to grab the mayo, but can be confusing to use.

Samsung does what it can to manage the tight corridors with a series of shelves and dividers. The refrigerator has six versatile door shelves that can be divided using either plastic divider or a metal support that flips out of the way when unneeded. These shelves are kept in place by gravity and are easy to remove. The same can be said of the four interior shelves and two drawers. In the freezer, there’s three more door shelves at the bottom of the door and four interior shelves with three small drawers.

While there’s no shortage of places to store things, you’d best be happy with where the shelves and drawers are located. Door shelves can be removed, but their location cannot be changed, and only one interior shelf in the refrigerator and freezer space can be adjusted for height.

The lack of adjustability and narrow interior can be frustrating. Food must be shuffled frequently and organizing the interior becomes increasingly difficult to manage as it reaches capacity. Worse, some items simply won’t fit, particularly in the very narrow freezer. Costco shoppers will be dismayed to find extra-large frozen pizzas and plus-sized boxes of beef patties can only be crammed in by turning them sideways.

A touchscreen with an old-school LED readout is the heart of the RH29’s controls. Users can access numerous features including freezer and refrigerator temperature, the LED panel’s lighting controls, the door alarm and the ice maker, which can be disabled to save power and water. The capacitive touch buttons endow the appliance with a slightly futuristic feel, and are simple and responsive. Most controls are activated with the touch of a single button.

The luxurious LED, touch-sensitive control panel is responsive and intuitive.

Both the freezer and refrigerator include a “power cool” feature that can be used to quickly cool the unit if the interior temperature is higher than desired. This may be useful if the door was left open, or if you’ve made a drastic change in desired interior temperature via the control panel. This feature runs the condenser aggressively, so be warned it increases and power draw.

On the flip side is energy saver, which reins in the condenser to conserve power. We didn’t notice a difference between energy saver and normal in our testing, but this mode may have trouble keeping temperatures at the desired point if the door is opened frequently. The manual also states that energy saver can cause condensation on the unit’s exterior, but we did not experience that problem.

Samsung offers an app that can be used to monitor the refrigerator remotely. This is a useful tool saddled with a few unfortunate limitations. The app is only available for Android, involves a setup process that requires several minutes and physical access to the appliance, and cannot be used outside of your home network. Once installed, the app provides estimated power draw and remote activation of several features including power cool.

The RH29’s refrigerator can be set between 34 and 44 degrees Fahrenheit. We set it to 35 for most of its time in our office but found that it had trouble keeping that temperature. Our test thermometers read around 40 degrees F no matter where we placed them, a full 5 degrees warmer than the target. However, the refrigerator was being used during this time, with the door opened at least once every half-hour. The interior may regulate itself better when left alone for several hours.

Our tests showed the freezer cools quickly and consistently.

Freezer temperature can be set anywhere between -8 and 5 degrees F. We set it to zero degrees for our testing and found this was maintained throughout most of the freezer, though the lower bins were up to three degrees warmer than the center shelves. Opening the freezer door of course increased the interior temperature rapidly, but it returned to the desired setting within minutes.

Energy Star rates the RH29 at an annual power consumption of 709 kilowatt hours, which works out to $85 for the average American home. This is adequately efficient but not exceptional for its class. The GE Profile PSE29KSESS, for example, is rated at 616kWh per year, while the Whirlpool Gold GSC25C6EYY is rated at 576kWh annually.

You may still save money with the Samsung, however, because of its Smart GRID connectivity. This feature talks with your utility and changes the refrigerator’s operation based on local power rates. The appliance can automatically restrict condenser during periods of high use (and high billing rates). Note that this will only work if your utility supports it, so you should check before purchasing.

These terms are par with the competition. General Electric and Electrolux have similar terms for all parts and a five-year on refrigeration components but does not offer the 10-year warranty on the condenser. KitchenAid and Whirlpool, meanwhile, offer almost identical terms but sometimes supplements them with a lifetime warranty on “door bins” – which, if we’re honest, feels more like a gimmick than a real advantage.

The Samsung RH29H9000SR is an adequate high-end refrigerator, but it falls short of proving the merit of showcase. Whatever convenience the trap door adds is negated by its somewhat confusing operation and a general lack of interior space and customization. Sure, the RH29 lets you grab the Miracle-Whip with miraculous speed, but finding the sandwich you want to put it on could be a problem.

The Samsung RH29 is attractive, and its controls are both fast and intuitive, but there’s minimal feature content advantage. Compared to others the Samsung’s most notable extras are the barebones Android app, power cool (which can be found in some competitors, like the previously mentioned GE) and showcase. These aren’t worth the premium charged.

This appliance isn’t bad. Interior arrangement aside it scores well in every area the average consumer will care about. But it lacks the killer feature a luxury product needs to stand out from the buffet of choices available, and that makes it a pass for consumers who care about value.

Best appliance sales and deals for 2022

The best sous vide machines for 2022

The best pressure cookers for 2022

The best smart kitchen appliances for 2022