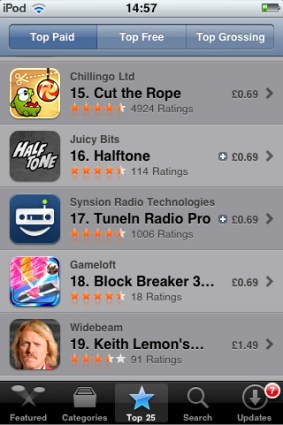 Apple App Store fans outside the US will be interested to learn that prices for software sold in the store have gone up and down – depending on which country you live. According to MacRumors, the price changes are the result of fluctuating exchange rates.

According to a recent report, the average user of Apple’s iOS App Store will download 83 apps in 2011, showing a significant increase on the average 51 apps users purchased in 2010.

The App Store, which first started doing business three years ago, has been a huge success, with Apple recently announcing the downloading of 425,000 apps a staggering 15 billion times since 2008.

The Cupertino computer giant is predicted to sell around 100 million iPhones during 2011, each and every one waiting to be filled up with lots of apps.

With stats like that, we find it hard to believe these slight adjustments in the price of the apps is going to have much effect on the store’s continuing popularity. And anyway, there’s always the free ones, some of which are really rather good.

Best cordless vacuum deals for May 2022