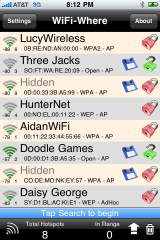 The great Apple App Store cleansing continues. After wiping out adult apps in a controversial purge last month, the company returned this week for its next target: Wi-Fi scanning apps.

Although Apple has made no formal announcement, a number of apps used for actively scanning for Wi-Fi, like WiFi Where, have mysteriously been dropped from the App Store. The Register claims that only apps using a “private framework” to detect Wi-Fi have faced the axe.

“We received a very unfortunate email today from Apple stating that WiFi Where has been removed from sale on the App Store for using private frameworks to access wireless information,” developer Three Jacks wrote in a blog entry. “It also appears that all other competing WiFi enabled apps have been removed as well. This is very unfortunate as the past 2-3 months have seen a handful of new WiFi apps get approved.”

Aside from individually notifying app developers, Apple has so far publicly remained mum on the issue, offering no explanation of why it removed the apps.