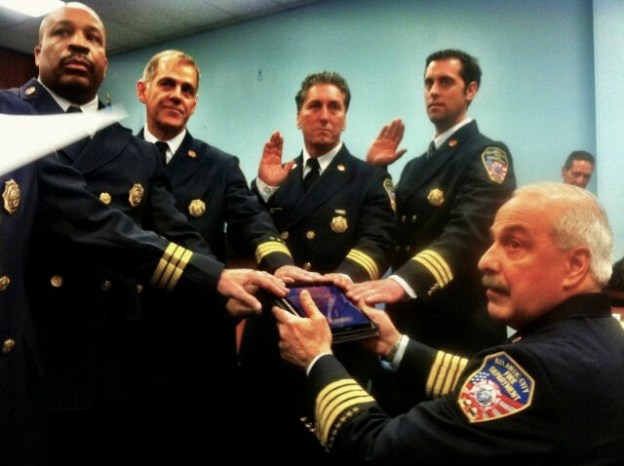 A group of Atlantic City firefighters thought their chance to be promoted to the ranks of battalion chief and fire captain had gone up in smoke recently when it was discovered no one had brought a bible to the City Council chambers, where the swearing-in ceremony was set to take place.

After a quick discussion about what to do, one bright spark had the idea to load a Bible app onto an iPad and use that instead. Once the app was downloaded and opened, each of the eight officers swore an oath by placing their left hand on the tablet while a crowd of friends, family and co-workers looked on.

It’s not the first time the iPad has come to the rescue in a situation where a printed document is required for a ceremony or process to take place. Last year Canadian citizen Martin Reisch claimed US border officials let him into the country after presenting them with a scanned image of his passport on his Apple tablet.

He said that upon arriving at the border, he realized he’d left his passport at home. Using his driver’s license as supporting ID, Reisch said he thought he’d “at least give it a try” with the iPad. The Montreal citizen added that he could see a day when scanned identification will be accepted at border crossings.

“I see the future as 100 percent being able to cross with your identity on a digital device – it’s just a matter of time,” he said.