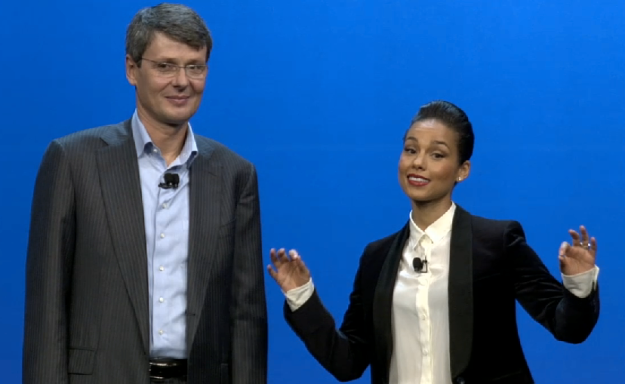 But despite telling Heins that she has now cast her aside her iPhone and was “exclusively” with BlackBerry, it appears Keys has been unable to break the habit, having apparently sent a tweet from her Apple-made phone on Monday.

“Started from the bottom now were here!” Keys’ tweet said (a line from a new song by hip hop artist Drake), accompanied by “via Twitter for iPhone.” Oops!

A BlackBerry spokesperson told CNBC on Monday that Keys “no longer has an iPhone and believes her account was hacked.”

Whether or not that’s the case, the incident is still something of an embarrassment for all concerned, especially considering the play Heins and Keys made about her switch to the Z10 during her appearance at the BlackBerry 10 launch event.

“You were a long time BlackBerry user and then we lost you for a while, what happened?” Heins had asked Keys.

“I was in a long-term relationship with BlackBerry and then I started to notice some newer, attractive, sexier phones at the gym and I kind of broke up with you for something that had a little more bling,” Keys replied.

She went on, “But I always missed the way you organized my life and the way you were there for me for my job and so I started having two phones. I was playing the field.

“And then you called and you told me you were working out, you added a lot more features, a new platform, you got a lot faster, all of that was true, and now we’re exclusively dating again and I’m very happy.”

If Keys did still have an iPhone when she woke up Monday morning, it’s a safe bet it’s in the trash can now.

Keys’ misstep (or not) has echoes of an incident back in November when Oprah Winfrey tweeted how much she loved Microsoft’s RT tablet – from an iPad.

“Gotta say love that SURFACE! Have bought 12 already for Christmas gifts. #FavoriteThings,” she wrote in the post. However, whereas Keys is presumably being paid a tidy sum for her work with BlackBerry, it’s not clear if Winfrey had received anything in return for her pro-Surface Tweet. Apple might have considered sending her a free device or two, however.