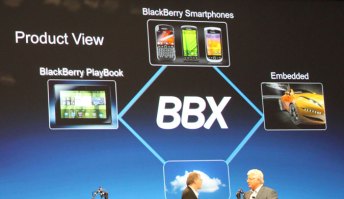 The year 2011 will undoubtedly be one that Research In Motion (RIM) will be glad to see the back of. Today the Ontario-based company suffered yet another setback, this time over the use of the name of its next mobile operating system, which was to be called BBX.

A federal court in Albuquerque on Tuesday granted a temporary restraining order against RIM using BBX to describe its new software. However, soon after the order was granted, RIM announced on its Twitter feed that its forthcoming operating system would now be called BlackBerry 10.

The court ruling was the result of a trademark dispute with Albuquerque-based software company Basis International, which is already using the BBX name for its own software product.

The BlackBerry and PlayBook maker would have used the BBX name at its Asia DevCon conference in Singapore later this week, but the court decision meant it would no longer be able to do so. In a statement, Basis said it had asked RIM not to use the BBX name at the conference, but RIM had refused to comply. As a result, Basis felt it had no choice but to file for the court order.

It’s been a dire 12 months for RIM. Its attempt at producing an iPad killer with the PlayBook has been nothing short of a disaster, with the company losing half a billion dollars in the last three months thanks to unsold and discounted tablets.

In October a three-day service outage affected millions of BlackBerry users around the world, while shares in the company have fallen by around 65 percent over the course of 2011.

Next year will be crucial for RIM with the company desperately hoping BlackBerry 10 will turn things around for it.