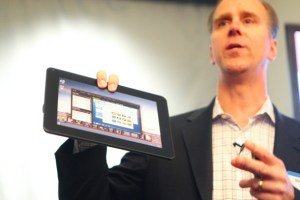 Last week, a Dell executive had cold words to say about the iPad, especially where it relates to business. Many of these claims (like a $1500 price point) were false. The nasty talk may have been a bit premature, however. Forbes is reporting that Dell’s planned 10-inch Windows 7 tablet may not hit shelves until September, at the earliest.

This delay is odd since Dell has been talking about the device since Oct. 2010, and confirmed its plans in February, saying it would release a business-centric tablet this year. Competitors like Asus have already released Windows 7 tablets.

Dell has been trying to break into the tablet market for some time now, though its Dell Streak 5 and 7-inch Android tablets have yet to take off and sell in volume. Despite the setbacks, Dell remains committed to developing tablet computers. We’re expecting its next tablet will be incredibly affordable.

Video-editing app LumaFusion to get a Galaxy Tab S8 launch
How to buy the new Apple Watch Series 8, SE, and Ultra
Google Pixel Tablet leak reveals key specs about the mysterious device
Hey look, the iPhone’s Dynamic Island has come to … Android?!?
The best wireless keyboards for 2022
How to use the Galaxy Z Fold 4’s massive screen without losing your mind
Best Phone Deals: Save on Google Pixel 6, Galaxy S22 Ultra
Does the iPhone 14 have a 120Hz display?
How to transfer WhatsApp messages from Android to iPhone
Best cheap Fitbit deals for September 2022
The Uber hack is an outrageous tale of a teen hacking for fun
The best Samsung Galaxy S22 screen protectors for 2022
LG’s doomed Rollable phone appears on video to show us what we missed