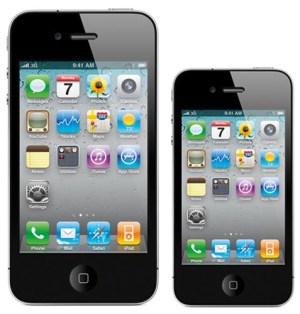 The long-running “iPhone Nano” rumor machine has finally reached full steam. Sunday, none other than the Wall Street Journal confirmed earlier rumors that Apple is currently working on a smaller, less-expensive iPhone to sell alongside its current line of high-priced iPhones. And now, CultOfMac has news that they say will “blow your mind.”

According to an unnamed source, Apple has decided to strip the new iPhone Nano (or iPhone Mini, or any other unofficial name you’d like to use) of all of its storage memory in order to reduce its size. In place of internal storage, the iPhone Nano will use Apple’s MoblieMe cloud computing service. This further corroborates the WSJ piece, which said that MobileMe “would serve as a ‘locker’ for personal memorabilia such as photos, music and videos, eliminating the need for devices to carry a lot of memory.”

The WSJ also reports that MobileMe will become a free service, rather than the $99 to $149 annual fee Apple currently charges, and could enable music streaming, through iTunes, on devices like the iPhone and iPad.

As CultOfMac points out, an iPhone entirely free of internal storage is practically impossible — the phone needs at least enough space to store an operating system and other necessary data. But if that’s all it has room for — the critical bits — it raises a number of questions about the purported device’s capabilities and functionality, like how taking photos or video would work if they have to be instantly uploaded to the MobileMe cloud, or what happens when the phone completely loses its connection.

Earlier reports from the WSJ and Bloomberg say the device will be somewhere between half and one-third smaller than the iPhone 4, and could cost as little as half as much for carriers — which could mean free iPhone deals for customers.

The release of a mass-market iPhone would lower Apple’s status as a maker of only top-line devices, which it has so far proved unwilling to do. But it would also help the company grab a larger share of the mobile market, which is currently being saturated by a glut of cheap Android devices.

Like with anything Apple, however, a smaller, less-pricey iPhone will undoubtedly come with an element of exclusivity. Something like the first-ever cloud-centric smartphone would fit that bill nicely.

Topics
Video-editing app LumaFusion to get a Galaxy Tab S8 launch
This Apple leaker just revealed tons of changes for iOS 17 and iPhone 15
How to get Apple’s Black History Month 2023 wallpapers for your iPhone and Apple Watch
The iPhone 15 Pro’s rumored new design is one I can’t wait for
The best iPhone apps in 2023: 50+ apps you need to download now
The best dating apps for 2023
The best webcams for 2023
The best USB-C headphone adapters for 2023
The best tablets for seniors for 2023
The best iPad keyboards for 2023
Is the Samsung Galaxy A14 5G waterproof?
The best fitness trackers in 2023: our 10 favorite picks
Watch the Galaxy S23 Ultra get unboxed a week before launch