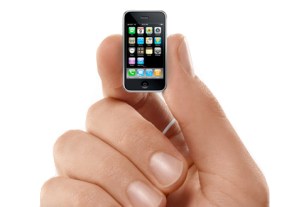 The rumors of a new, less expensive iPhone are true, reports the Wall Street Journal. The device — which is codenamed “N97” — will be roughly half the size of the iPhone 4, weigh “significantly” less, and sport an “edge-to-edge” screen. The smaller iPhone will also include voice-based navigation, a virtual keyboard and cost roughly half the price of the current iPhone.

Apple currently sells the iPhone to carriers for an average of $625 per phone. With carrier subsidies, customers can get the iPhone 4 for as little as $199. Because of the low cost of the smaller iPhone, says the WSJ, the carrier subsidies would allow users to get the phone for very little, or possibly for free.

A free, or at least less-expensive, iPhone would allow Apple to compete with the swarm of “mass-market” (i.e. Android) handsets that have come to dominate the smartphone industry. In fact, it’s curious — and not at all surprising — that this news of a new, more competitively-priced iPhone arrived just after Samsung’s Sunday announcement of the Android-based Galaxy S II smartphone at Mobile World Congress 2011.

It makes perfect sense for Apple to be making moves against Android. In 2010, use of Google’s Android operating system grew by 888 percent globally. That places Android second only to Symbian in terms of market share percentages. (And Symbian, we now know, will not be with us much longer.) Plus, more Android-based devices shipped in 2010 than phones running any other OS. Sources say Apple realized its need to grab a piece from the lower market; and thus, the smaller iPhone.

Last week, Bloomberg made similar claims about a smaller, cheaper iPhone being in the works. But in that version, the phone was $200 without a contract, and measured one-third smaller than the size of an iPhone 4, not half.

Apple is also allegedly “exploring a major revamp of its MobileMe online storage service.” MobileMe, Apple’s cloud computing and device synchronization service that launched in 2008, currently carries an annual $99 subscription fee. But Apple may soon offer the service for free, the sources say.

In addition, an updated MobileMe could become the “focal point” of a new “online music service that Apple has been developing for more than a year,” and may give users access to their iTunes library from their iPhone or iPad. This may essentially confirm that Apple has been preparing iTunes to include music streaming capabilities — a rumor that’s been percolating since Apple bought, and then promptly shutdown, streaming site Lala.com last spring.

With both Bloomberg and the Wall Street Journal — respected publications that investors read — saying Apple has a new phone in the works to help the company make money where it’s currently not, we can say with near certainty that the rumored smaller iPhone is true, in one form or another. Neither Steve Jobs nor an official Apple spokesperson would confirm or deny any of these rumors, however, so it’s impossible to say how much of these details will be true come launch day.