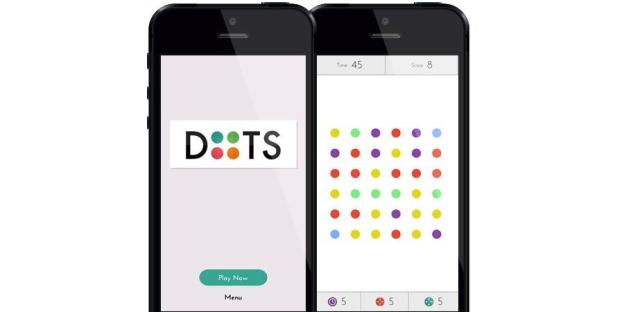 Is it time for mobile “classics” like Angry Birds and Draw Something to watch their back? Dots, a new iOS game from Betaworks, appears to be climbing the charts quickly in the iOS App Store. After just a week of availability, the game has hit over 1 million downloads and hit the top spot on the downloads list in eight different countries.

Dots has a strong pedigree to support its quick path to success. Backed by the same team over at Betaworks that brought Instapaper into existence, revived Digg, and created Bitly, it should be no surprise that Dots has managed to catch on well so early into its life cycle. According to a blogpost from Betaworks, over 25 million games of Dots have been played so far. That number is likely growing exponentially.

Despite the advancement of mobile technology and the newfound graphical capacity of many portable devices, it seems that the simpler a game is, the better. Dots is pretty much the perfect example of that. It takes an old classic game that we all know and love – in this case the connect-the-dots that you’ve no doubt played on a napkin while waiting for food or used to pass the time while in the back seat on a road trip – mixes it with Bejeweled-style gameplay that requires you to clear out colors by connecting them, and supercharges it with mobile game musts like power-ups and some (available but not absolutely necessary) in-app purchases.

The game relies on familiar mechanics, reworked slightly, and the ever-powerful tool of competition by keeping leader boards. As you clear off colors of dots, you rack up points. These scores can be improved by top-stopping or dot-clearing power ups, neither of which are needed to play but likely are to knock your friends down a few pegs on the top score list. It does suffer from some redundancy, but that’s kind of the point. The game should feel familiar every time you open it and be enjoyable for however long your gaming session is. With games occurring in 60 second blasts, the repetition never gets overwhelming or drags down the experience. Add to it a deceivingly gorgeous design that offers plenty of subtle beauty despite such simplicity, and Dots seems to have just about everything it takes to be a mobile hit.

Dots is available for free on iOS from the iTunes App Store.

Video-editing app LumaFusion to get a Galaxy Tab S8 launch
The U.K. wants to break up Google and Apple’s cloud gaming stranglehold
The Pixel 7 is Google’s iPhone, and it’s my favorite Android phone so far
My lack of self-control is a warning not to upgrade your phone this year
Don’t miss your chance to buy an iPhone SE (2020) for $99 today
5 phones you absolutely shouldn’t buy on Black Friday
How to set up and use a second line on an iPhone with an eSIM
Apple iPad Mini just got a $100 discount for Black Friday
Apple’s MagSafe Leather Wallet for iPhone is 24% off for Black Friday
Why the cheap Pixel 7 ruins all other Black Friday phone deals
MagSafe PopSockets are life changing, and on sale for Black Friday
This iPhone 11 Black Friday deal is crazy good — get it for $199
The best Black Friday phone deals for 2022