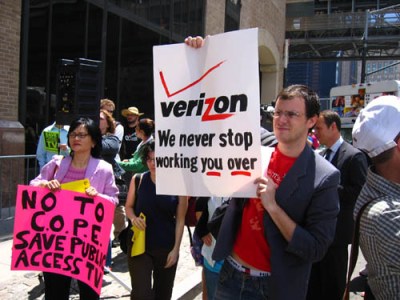 The Federal Communications Commission on Friday asked Verizon Wireless why it recently doubled the fees it charges customers when they break their contracts on “smart” phones.

In November, the carrier hiked the maximum early contract termination fee for smartphones to $350 from $175. Like other carriers, Verizon subsidizes the cost of the devices for contract-signing customers, then expects to make that money back in service fees over the term of the contract.

The FCC’s letter to Verizon asks how consumers will know whether the increased fee applies to their phone, and whether it’s spelled out anywhere except in the formal customer agreement.

The FCC is also asking the carrier about $1.99 data access fees that have appeared on the bills of customers who don’t have data plans but accidentally initiate data access by hitting a button on their phones. Verizon says that as of a few months ago, it doesn’t charge when a customer starts a data service then quickly turns it off.

The Plain Dealer in Cleveland tapped into a vein of frustration among Verizon customers in columns on the issue in August.