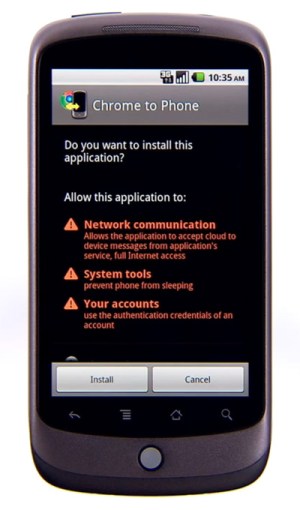 It’s a good day to count yourself in the Google Android camp. The new Motorola Droid 2 dropped on Verizon, analysts report Android  has clawed out even more market share, Sony has adopted it for its upcoming PlayStation phone, and now Google has tacked on two interesting – and free – new feature for Android users.

At a press conference in San Francisco, the company revealed voice actions, which allow Android phones to respond to voice commands, and the new Chrome to Phone extension, which makes it easier to whip some desktop reading off to your smartphone for later reading. Both are available immediately for free, but only on Android 2.2.

Voice actions expand on the original voice search option within Android by adding a whole set of commands to control in-phone actions. For instance, you can say “send text to Joe I’ll be late for soccer,” “call Rovente Pizza,” or “directions to Seaside, Oregon” and the phone will comply. The full list of actions includes:

The obvious caveat here: Voice recognition seldom works as accurately as you hope, but the Phone allows you to review and fix commands before it executes them, and Google claims it is continuing to improve the technology as it rolls out new features.

Since most smartphone users surf on both their phones and computers, Chrome to Phone makes it easier to share information from one to the other. After installing the Chrome extension, which was developed by Google engineer Dave Burke in his “20 percent time,” you can send links from any computer to your smartphone with the click of a button. Besides sites, it also makes it possible to send phone numbers and addresses – like when you’ve decided on a spot for dinner and want to zip it off to your phone before you leave the house. Unfortunately, Google hasn’t yet enabled the reverse flow of information to send sites you stumble across on your phone to your desktop browser.

Check out the demos below!